The celebrity lineage at a certain Beverly Hills home just got even longer. Adam Levine and Behati Prinsloo have sold their 10,376-square-foot mansion for $45 million to some very familiar new owners.

Levine and Prinsloo offloaded it to Los Angeles real estate fixtures Ellen DeGeneres and Portia de Rossi, who paid a touch under the $47.5 million asking price for the seven-bedroom, eight-bathroom property, reports Variety.

The Maroon 5 singer and his model wife owned the estate for barely a year; they purchased it in March 2018 from Will & Grace creator Max Mutchnick, who had bought it years before from tennis legend Pete Sampras.

Levine and Prinsloo are longtime pals of DeGeneres. In fact, the Ellen Show host is the one who originally suggested their first daughter’s name, Dusty Rose. Oddly enough, it doesn’t seem that the Victoria’s Secret Angel and DeGeneres discussed the recent real estate transaction during Prinsloo’s latest appearance on the talk show today; surely it must have come up at some point.

The couple have been on quite the real estate rampage. Last year, Levine sold his bachelor pad to none other than John Mayer, and they also sold a Holmby Hills house last winter after owning it for just six months.

Even though Levine and Prinsloo, who have two children, didn’t own this Beverly Hills estate for that long, they still reportedly managed to complete a $7 million renovation. We wonder what DeGeneres and de Rossi will do with the home next, as the couple have rarely (if ever) left a house alone after purchasing it. Maybe Jessica Alba will get some more interior inspo from them.

The private, secluded and gated property features a two-story entry and has a 50-foot living room with a coffered ceiling and black marble fireplace. The kitchen is fitted with stainless steel appliances and coordinating silver countertops and has an island, steel accents and neutral stone backsplash. It is open to a family room, and there’s also a more formal dining room with its own bar. A screening room is adjacent to a second bar area.

The home also has a guest house, and outside there’s a “swimmer’s pool,” per the listing held by Westside Estate Agency broker Kurt Rappaport, as well as a putting green, an outdoor kitchen and pizza oven, and a tennis court (we imagine that was all Sampras).

As for where Levine and Prinsloo are heading next? Well, they paid around $32 million for Jennifer Garner and Ben Affleck’s old Pacific Palisades compound late last year, so perhaps they’ll actually stay put for a bit. 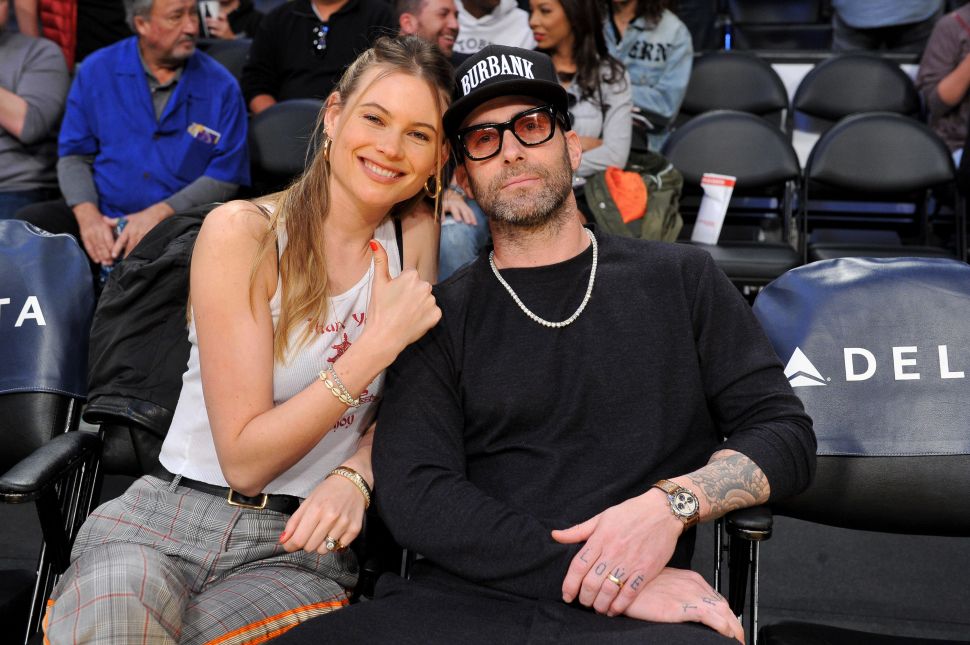