We’ll just say it: Disney’s live-action reimaginings of its animated films will never measure up to the beloved originals. No amount of star power can match the raw childlike awe and wonder these joyous cartoons evoke, and nostalgia will always trump blatant cash grabs. Once you accept that, you can face the reality of Disney’s assembly-line dream factory with a greater sense of clarity and closure. Cocooned within this headspace is the difficult-to-reconcile truth that the sparkly new version of Aladdin ain’t half bad. In fact, it could cement a moneymaking strategy for the Mouse House.

Everything in Aladdin‘s trailers has been widely mocked, from the hideous uncanny valley of Will Smith’s original Genie to the made-for-TV-movie aesthetic of Marwan Kenzari’s Jafar. Disney’s promotional campaign painted director Guy Ritchie’s live-action take as supremely corny. Actually, Aladdin is… extremely corny. At one point, Mena Massoud’s titular protagonist hip-hop break dances, which is certainly… a choice. But the movie is also fun and cheeky and energetic, presented by Ritchie as half Broadway show, half concert and wholly spirited.

Some good news: Smith never attempts to one-up Robin Williams’ iconic performance, instead lending his Genie a lovable Fresh Prince stylization that works on its own. Naomi Scott’s Jasmine is given a modern update that repositions the character as the Sansa Stark of Agrabah—a noble and competent female leader who wants what’s best for her people. It helps that Scott is also the clear standout of the cast in terms of singing ability (she makes quick work of her new solo).

Also, Aladdin‘s production value is off the charts, with dollar signs practically leaping from the screen. We often wax poetic about cinema transporting audiences to a whole new world, but without assuming an air of pretension, Aladdin manages to build a fanciful and attractive environment from the ground up. Kids are going to love its colorful set pieces, and I can neither confirm nor deny that I googled to see if Agrabah was a real place after it ended. The end result is an enjoyable—if flawed—theatrical escapade.

But is it a moneymaker?

In the modern Hollywood age, Disney has built its box-office empire on an acquisition-based foundation (Pixar, Marvel, Lucasfilm, Fox) that surveys the industry for undervalued high-upside assets. But to raise the studio’s floor and establish a safety net, Disney needs a homegrown division it can rely on.

The latest tracking projections peg Aladdin for a solid opening of around $80 million over Memorial Day Weekend, a strong start for the expensive feature. That’s crucial, as Disney’s live-action reimaginings have been hit or miss. Beauty and the Beast ($1.2 billion worldwide), Alice in Wonderland ($1.0 billion) and The Jungle Book ($966 million) are clear-cut winners, but more recent efforts such as Dumbo ($347 million) and The Nutcracker and the Four Realms ($174 million) give pause. How should Disney proceed in this lane?

Aladdin‘s opening weekend should prove that a halfway-decent interpretation of a big enough piece of IP is enough to march its way to profitability. The original is modern enough that it appeals to both millennials and their young children, its tunes still receiving significant YouTube play. If the remake lives up to financial expectations, the studio could very well have a blueprint for in-house success.

But when it comes to turning Disney’s less-heralded and older titles into live-action fare, we still think Disney+ may be the way to go. The streaming service will offer a new take on Lady and the Tramp when it launches in November, eliminating the box-office risk of trotting out a so-so brand theatrically while providing its new venture with juicy exclusive content. It’s the type of pricey but low-risk move that the studio should have taken with Dumbo. In the short term, it costs a bundle of money, but it feeds Disney+ (the studio’s long-term priority) and avoids any snafus that accompany a box-office bomb.

This is about an equation of value, and determining where a property boasts the most of it. In that sense, Aladdin is the “solve for X.” If it can overcome its subpar marketing campaign thanks to better-than-expected reviews and its name-brand power, Disney will have the perfect case study for how to proceed with its new spins on old classics. 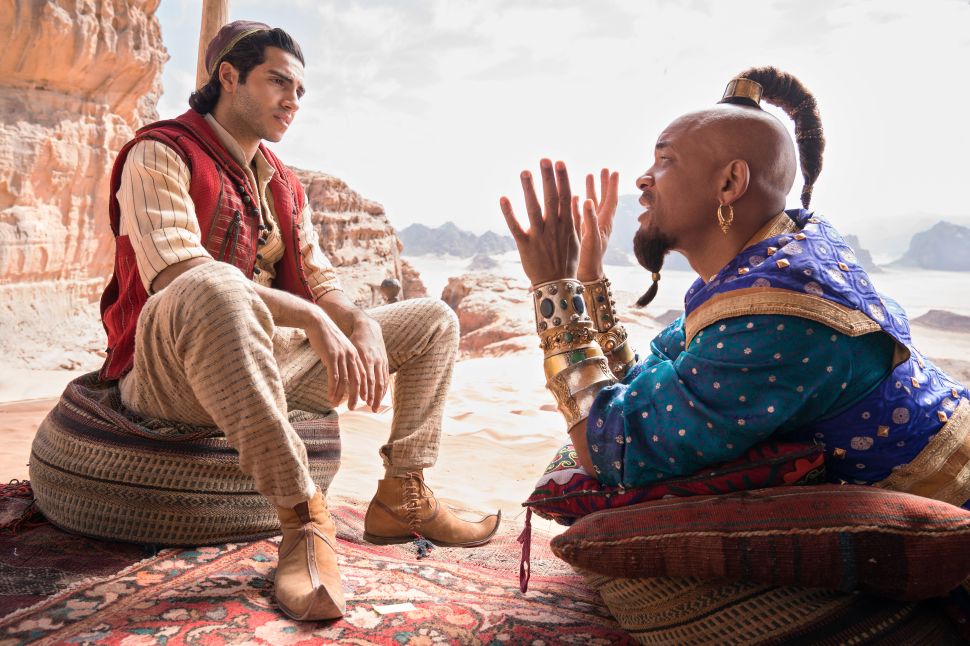