Poor, poor Matt Furie. Imagine in 2005, creating the innocent cartoon character of Pepe the Frog for a comic series on Myspace. And then years later having the alt-right co-opt the lovable green anthropomorphic frog—with the meme now associated with hate groups and white nationalism.

Furie couldn’t control Pepe from morphing into a symbol of hate, but he now has legal power to sue. Last week, a copyright infringement lawsuit was filed in a California court against conspiracy lunatic, Alex Jones, and his nutball site, InfoWars.

Like the huckster he is, Jones was selling posters of Pepe rubbing elbows with a smattering of such MAGA stars as Roger Stone and Donald Trump.

Jones, a man who thinks the New Word Order is run by a reptilian race, alleged that Furie’s copyright for the Pepe character is invalid because he believes its origins are based off a frog from an Argentinian cartoon called “El Sapo Pepe.”

Oh, it’s always a conspiracy with you, Mr. Jones, isn’t it?

Looks like a legal ‘false flag.’ I do believe the only real similarity is that they both are cartoons frogs that like to wear shirts… and are green. Is this somehow associated with Jones’ claim that chemicals in the are turning frogs gay?

Last year, Furie’s lawyers had a copyright infringement victory by having Pepe the Frog pulled from the neo-Nazi site, The Daily Stormer.

The copyright infringement case of Pepe the Frog does bring to light other symbols/memes in the culture-sphere that were once innocent—but somehow got ousted for evil purposes.

The Swastika and Charlie Chaplin’s Mustache

OK, this isn’t really a symbol, except when it’s displayed on a button or red cap, but the origin is a 1980 slogan that was originally used by Ronald Reagan to refer to the country’s economic distress as a springboard for his presidential campaign. Now, it’s been co-opted by President Donald Trump as a metaphor for xenophobia and a hatred of brown people.

Trump said of plagiarizing Reagan’s usage of the phrase: “He didn’t trademark it. I think I’m somebody that understands marketing.”

The disturbing-looking Philadelphia Flyers mascot was pulled into a tug-of-war of good vs. evil when anti-Semitic groups tried to claim the character, via social media memes, as a Nazi collaborator and adopter of anti-Jewish conspiracy theories.

Not to be out done, Flyers fans reclaimed their crazy-looking mascot by using Gritty as a symbol to denounce hate during a protest of the alt-right Proud Boys. In the end, Gritty refused to go down as some sort of Pepe 2.0.

I always think of Beavis and Butt-Head when it comes to putting your fingers in the air in a hand-gesture that reads, “Hail Satan!” It’s a good thing to do at heavy metal concerts. But the history of this hand gesture goes back to ancient India where it was used as a nod to Buddha to expel demons. Ironically, Gene Simmons of KISS filed an application in 2017 to trademark the “devil’s horns” hand gesture because he claimed he was the first one to start using it, as such, in 1974. The case was later dropped… mere days later. Sorry, Mr. Simmons.

The OK hand gesture has had quite a journey. Currently, it’s being used by assholes as a sign of the alt-right. Previously, it was a symbol that meant that everything was “fine”—or everything was “OK.” But originally, in Mediterranean and South American countries, the OK sign symbolized “the anus.” Put all those three means together and you get: an anus that’s fine and hates Jews. 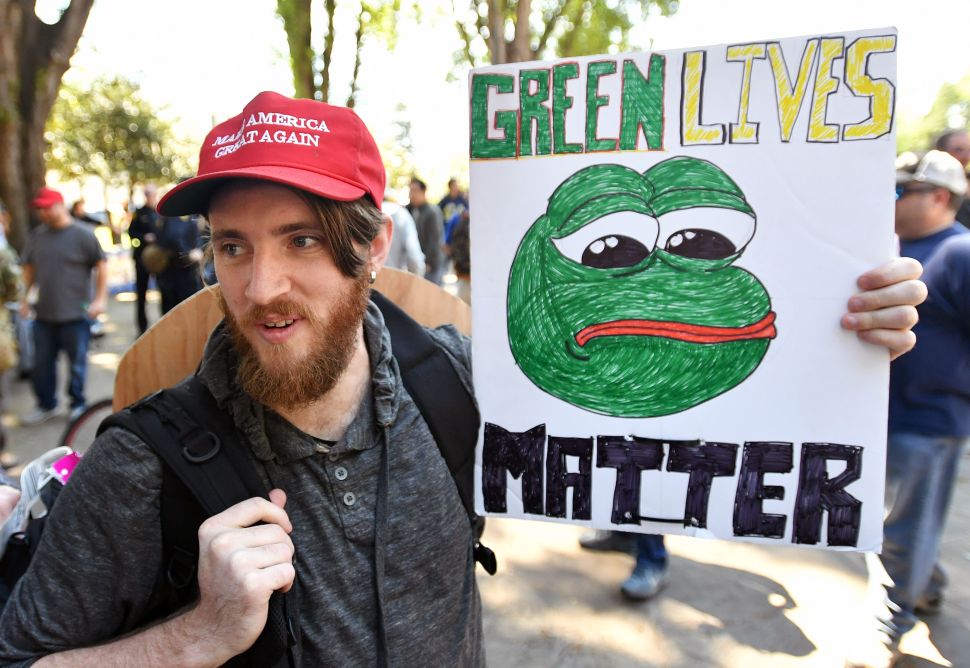