It’s an unseasonably crisp and gloomy May day in Los Angeles when Anthony Carrigan, the scene-stealing actor who plays Chechen mobster NoHo Hank on the HBO comedy Barry, poses for a picture on a quiet, residential Culver City street mere steps from the gated Sony Pictures lot. As the photographer snaps his shots, a young man walks by and assesses the scene—not a completely unexpected one in L.A.—and smiles with recognition. “It’s NoHo Hank!” the guy says, then moseys down the sidewalk to wherever he’s headed.

Carrigan flashes a grin. With Barry’s success—the show’s first season earned Emmys for its lead (and co-creator) Bill Hader and for supporting player Henry Winkler; HBO ordered a third season just weeks into its second—this is the sort of thing the actor prepares for. Because while Carrigan himself might not yet be a household name, NoHo Hank surely is.

As with any actor who delivers such a believable, lived-in performance, you’d expect Carrigan to display his alter ego’s most recognizable traits—so much so that it’s jarring to meet him and not hear him speak with an Chechen accent. “Sometimes people are a little disappointed,” he says. “Like, ‘Wait, you’re not Russian or Chechen?’” But he’s too polite not to indulge them. “They always ask, ‘Well, can you do it? Can you do the voice real quick?’” The good news is that he’ll put on a show if you’re nice enough.

Hank is one of the many oddballs surrounding Hader’s titular character, an army vet turned reluctant hitman. In the series’ first season, Barry begrudgingly works with the Chechen mob after Hank’s boss hires him to kill the man who’s sleeping with his wife. While pursuing his target, Barry stumbles upon an acting class run by self-established guru Gene Cousineau (Winkler), and a brief moment on stage brings a sudden rush and meaning into his life.

Barry quickly finds himself straddling two worlds: a louche criminal L.A. underbelly controlled by rival ethnic gangs, and the sometimes equally dispiriting local acting scene, full of struggling thespians hoping to get their big break. Hank resides in just one of those worlds—though Carrigan says he’s not unlike Barry in that he’s trying to fit the mold of something he doesn’t entirely relate to. Barry’s self-examination forces him to question his darker side in his acting class, which delivers some of the show’s bleak emotional lows. Meanwhile, the gangland side, ironically, offers some of the more light-hearted moments, particularly when Hank serves up the comic relief. In one memorable scene, a sullen Barry asks Hank, “Am I evil?” Hank’s face lights up before he replies, “Oh, my God, absolutely. Do I not tell you that enough? You are, like, the most evil guy I know, man!”

He is not your typical gangster; he’s gregarious, almost good-natured, striving to be the thug and the best friend. He’s the pit bull you expect to growl at you when you walk through the door, only to have him jump up and lick your face with excitement. “But he still has teeth,” Carrigan says. As someone who’s made a career out of playing villains (not necessarily by choice), he’s especially adept at oscillating from affectionate (at one point Hank texts Barry a wide-eyed Bitmoji that reads “GULP!”) to cruel (of his many targets, he’s particularly obsessed with knocking off Esther, the leader of a Burmese gang who’s winning the attention of his mentor, the Bolivian crime boss Cristobal).

While Barry tries to leave his violent past behind him, Hank, too, tries to assimilate into a world he thinks he’s supposed to be a part of. “What Barry does really beautifully is create these characters with such weird juxtapositions, and in this season in particular, their true nature is coming out,” Carrigan says. “Hank, I think, has come from a really hard upbringing and wants to embody this over-the-top glorified mob boss, kind of part Tony Robbins and part Tony Montana. But his true nature is such that it’s hard for him. He’s actually a good person, just kind of a product of what he grew up in. The show pushes these characters in terms of who they’re trying to be versus who they really are.”

If you strip Carrigan of the bright clothes and myriad tattoos that Hank sports—and also wipe away that accent—you start to wonder if he isn’t that different from his character. He’s certainly personable and charming. But he says he’s actually more like Barry, comparing how the tortured antihero dove into acting in order to flee the real person he didn’t want to be.

Carrigan has had alopecia areata, an autoimmune disease that causes hair loss, since he was 3 years old. “I was always very shy because of it,” he says. “I never really wanted anyone to find out about it, so I always wore baseball caps, and I kept them so low, no one could make eye contact with me.”

Like Barry, Carrigan discovered the thrill of performing on stage, though his epiphany arrived when he was a kid and played a pirate in a production of Peter Pan. (“A villain from the start,” he jokes.) Being able to express himself that way, as a completely different person, was empowering. He knew he wanted to keep going.

He went on to study theater at Carnegie Mellon University, and after finishing his degree he appeared in a 2007 Shakespeare in the Park production of Romeo and Juliet along with a then-little-known Oscar Isaac. He made his TV debut soon after with the short-lived late-aughts ABC crime drama The Forgotten. But as his career slowly took off, Carrigan was slowly losing more hair.

“I tried to cover it up,” he says. Wearing hairpieces and fake eyebrows, which he’d draw on himself, didn’t exactly keep his condition a secret. “People were noticing that something was off about me. They were noticing the alopecia, sure, but I was also broadcasting a lot of fear and panic.” He describes the message he was putting out into the world as “Don’t look at me.”

That sort of thing can backfire, especially when your chosen profession requires you to grab others’ attention. And for Carrigan, it did. “I had a lot of people telling me that my alopecia was going to hobble me to the point where I was never going to work again,” he says. “I had people telling me I was no longer good-looking enough to be on television. They were being honest, trying to spare me some of the pain.”

Carrigan realized he had two options: accept that being an actor wasn’t in the cards, or decide that alopecia wouldn’t put an end to his career. He took a gamble. He shaved his head and ditched the fake eyebrows. “The thing I was always scared of was someone telling me, ‘This isn’t going to happen for you because of alopecia,’” he says. When that happened, it ultimately propelled him forward: “I was still there. It didn’t annihilate me. I didn’t turn into dust.”

He started booking jobs playing comic book bad guys (Mist on the CW’s The Flash, Victor Zsasz on Fox’s Gotham), but while there’s a certain caricature-like absurdity to those roles and to Hank, the latter is far from one-dimensional. Carrigan describes him as being “way more comfortable in the assistant position” than as a boss: “It’s hard to be a people pleaser when you’re also ordering people to be killed,” he says.

Hank loves being around Barry even if he doesn’t pick up the cues that the admiration is unrequited. But his presence in Barry’s life is both chaotic and infectious—which is how you could sum up the buzz Carrigan gets playing him. “It’s the most fun I’ve ever had,” he says. “Honestly, I’m being spoiled, and the cast all feel it, too. We know how special this thing is.”

Talking to Carrigan, whose optimism seems infinite, you get a little envious. Maybe that’s what happens when you think you’ve got nothing to lose. Carrigan says that when he shaved his head and broke free from the fear that was holding him back, he only felt empowered. “The hard part’s over,” he remembers thinking.

So he got to work. He bought a notebook, and he wrote down a list of things he wanted. “I wanted to be in a fantastic show with a wonderful creator and a cast and crew that felt like a great family,” he says. “I wanted to play a really fun, vibrant character and bring a lot of enjoyment to people. And I wanted to be on HBO.”

The Season 2 finale of Barry airs Sunday, May 19. 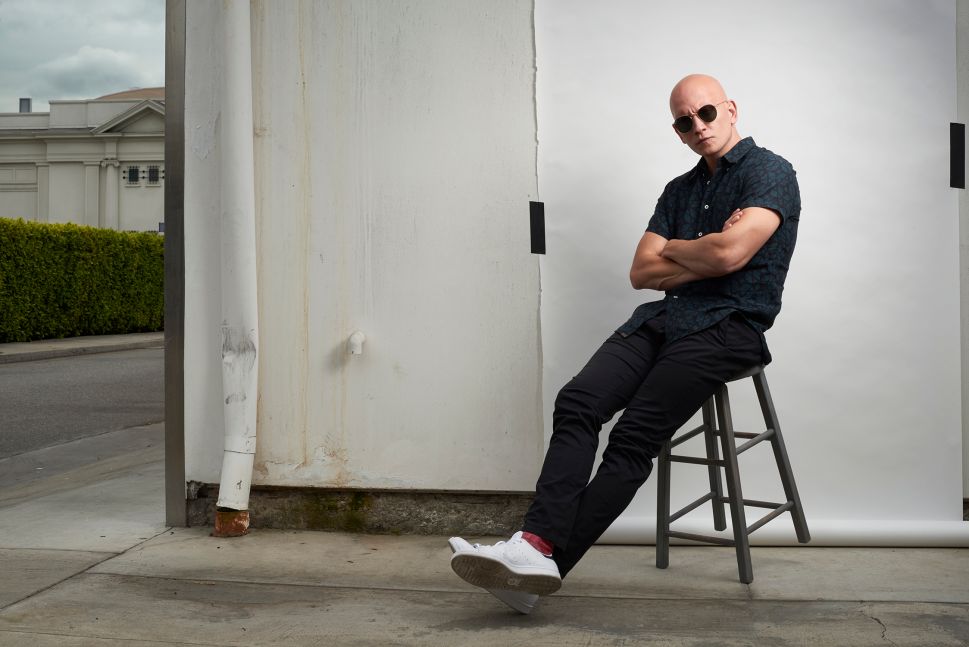