If you’ve ever sat in an office next to that one coworker who insists on having his or her ringtones on loud, congratulations: you’ve experienced having your nerves grated on by someone else’s noisy notifications.

It’s safe to assume that for most of us, the ring features on our phones are merely there to be quickly shut down in favor of the less intrusive vibrate. Or perhaps only turned up during emergencies or expected calls. After all, the sing-song mash-up of iMessage, WhatsApp and Twitter sound notifications is undeniably irritating.

The massive popularity of vibrate mode has left most of us with very little idea of what half the apps on our devices sound like while they silently vie for our attention. In fact, I myself have spent the past five-plus years with my phone on silent (with the exception of a couple of emergencies). Listening to a mélange of WhatsApp’s family group chat pop-ups, incoming Gmail messages and, of course, the iconic iMessage “tri-tone” all at once is eventually unbearable on any ear.

But are our social habits (i.e., keeping our phones quiet) preventing us from enjoying an app’s full potential?

Turns out, like everything else involving technology, the process of creating a brand’s custom notifications and alerts is more complicated than you may have previously imagined. While it’s easy to assume a sound engineer throws a last-minute tone on an app’s backend, these days: app makers are going to great lengths to build the sounds of our favorite apps from the ground up.

To the untrained ear, the pings and rings of mobile social and utility apps, like Facebook, Tumblr and even LinkedIn, can sound like generic noises. But long gone are the days of AOL’s notorious ‘You’ve Got Mail’ and AIM’s door-swinging Buddy List notifications.

The new age of mobile sound is as much about representing the app’s brand and mission as it is about the user experience. It not only requires extensive musical knowledge, but also the tech skills to design these sounds.

Josh Mobley, a composer and sound designer who’s created sounds for apps like Tumblr, LinkedIn and Clear, says that working from a musical sense allows for the final product to be as pleasant to the ear, and as least intrusive, as possible.

“The trick is to make a sound that people will hear that isn’t going to annoy the shit out of them every time it plays,” Mobley told Observer. “It needs to be distinctive yet unobtrusive.”

As for the technical musicality, there’s more than meets the eye… erm, ear.

“I always work in the upper register because the human ear is attenuated to the 2K to 5K range of frequencies,” Mobley explained. “And I’m confident most phones can handle that range already.”

Speaking of the technical side, Chris Kyriakakis, a professor of electrical and computer engineering/systems and the director of the Immersive Audio Laboratory at USC, believes that first and foremost: sound quality is a large consideration.

“Small speakers in mobile devices and cheap plastic headphones can be made to sound great by harnessing the processing power in the device they are connected to,” he explained. And by studying the sound problems of the playback system in advance, engineers can make sure apps will process the sound before it plays. Of course, today’s advanced smartphones have helped in elevating audio, thus helping engineers design more nuanced noises.

These wonders of audio engineering make a dramatic difference to app users, according to Kyriakakis, with the listener sometimes led to wonder, “How can it sound so good from such a small speaker?”

With tech companies becoming notorious for specific branding strategies to present their products well, sound has become a nuanced feature for developers to incorporate into an interface.

So these days, both startups and tech giants want the crème de la crème of sound design.

With Tumblr, for example, being a creative, playful environment, the possibilities were endless for Mobley. “They approached me wanting something fun and lively, nothing harsh or overbearing,” he explained. After coming up with numerous different sounds, both parties whittled it down to one tone that spoke to the culture of the company. “When you hear it, you want to go to the app,” Mobley said.

That’s exactly the purpose of an app’s notification tone. Sound engineer Connor Moore knows how sound can define a product’s popularity. Before becoming entrenched in San Francisco tech scene, Moore’s path included a musical career as an instrumentalist; he even had a band in college.

“With music defining who you are growing up and who you are, my thinking was ‘why wouldn’t products think this way?'” Moore told Observer. “It’s a great way for them to communicate a personality and point of view in a creative way.”

Having worked on audio of products like the Amazon Fire Phone, Google Glass and Uber Rush, Moore says the sound creation process is a full-on mission to not only make the brand happy, but also to think of the sound’s effect on users.

To get the tone just right, Moore and his team at CMoore Sound study creative briefs, brand strategy and the product’s industrial design to see how they can match it sonically.

Once a sound idea is decided upon, the entire process includes three phases: tune exploration to build out the instrumentation; referencing music theory to be sure the human ear can innately understand the notes; and finally, testing functionality.

Of course, there’s the aforementioned issue of avoiding the user’s (me!) weariness, with the mish-mosh of notifications blasting from phones and pushing people over the edge.

“With the sounds we design, we think long and hard about listening fatigue and not driving users batshit crazy,” Moore explained, echoing Mobley’s sentiment. “Especially for those mobile apps, where sound isn’t even necessary.”

The question is: How does an artist—and let’s face it, that’s what sound engineers are, in this case—convince a brand to take a minimalist approach to audio?

“Sometimes a client wants 15 sounds for a service,” Moore said. “But a good sound designer can identify when it’s too much and convince the client to pull back.”

Kyriakakis likened the piled ringtone effect from all of your favorite apps to another example of notification fatigue—fighter jet communications. “In these situations, it’s common for the pilot to have to communicate with multiple teams such as engine and radar, along with incoming threats.”

Regarding this rippling effect, Moore says that sound engineers don’t put too much stock in avoiding it. Not to mention, it would be virtually impossible to do so.

While he and others do study the competitive landscape for knowledge and inspiration, “we’re not necessarily looking to be harmonious with other apps,” Moore explained. “Instead, when we design sound for an app, we’re going for the in-app experience to be cohesive.”

Admittedly, Mobley noted that even “when you hear an inoffensive sound, when it’s every five minutes, on top of hundreds of others, it becomes madness.”

For Mobley, the least that a sound engineer can do, much like a recording artist, is go easy on the listener’s ears. “I find that making tones that aren’t too complex—very simple but have the modality—tends to be the least offensive route,” he said, admitting that, of course, “there are developers who don’t respect your peace of mind and try to push out apps with terrible sounds.”

For users, until app makers wake up to our hearing woes, the best policy is to customize notifications according to your specific taste… and tolerance.

Even for Mobley, as a technology owner, he’s aware of how overwhelming muddled audio can be for the everyday user. “There’s a divide for everyone’s attention,” he said, admitting that even he has a hard time keeping his phone on loud. “I try to be aware of other people because I don’t wanna be that person.”

Perhaps “that person” is the actual problem—and not the ringtone technology itself.

Then again, what is the point of apps putting so many resources into their sounds? In reality, if we all collectively decide to mute our devices, designing ringtones would seem like a waste of effort and talent.

Learning what it takes to not only design these sounds, but to actually collaborate on the process with brands, is eye-opening for any technology enthusiast. And while the insight won’t necessarily get users to turn their sound on to the loudest setting, there’s something to be said about the effort put into the notifications we swipe away on a daily basis.

The Future Beyond Ringtones

While branding an app’s individuality with sound is great, the future of audio design in tech is expected to exceed the standard of today’s apps.

According to Kyriakakis, we are still in the early stages of tech audio design, in which the emphasis is on the jingle, but the possibilities are endless. Kyriakakis says in the future, consumer technology could borrow techniques from jet flying communications to ease notifications on the ear with subtle sensations.

“With more and more users listening over headphones connected to their mobile device, the technology to spatialize sounds in 3D space is already here,” said Kyriakakis. “It would be a great leap forward if notifications were spatialized so that the user can utilize its direction to decipher the communication.” For example, a ding from front and center of your headphones could signal an urgent text, while a softer one from the back-end could be a less important notification.

Until audio design progresses to get to the aforementioned preciseness, users must take the reins when it comes to controlling all of their mobile alerts.

Whether it’s checking off which apps use specific tones, or muting sound altogether in favor of custom vibrations, the choice is in the users’ literal hands. For now, all we can do is be aware of our surroundings and follow basic tech social etiquette.

Whatever you decide, just avoid using lame songs for your notifications—in the style of the early aughts. As Mobley quipped: “The most unforgivable sin is when some Top 40 song goes off as a ringtone.” 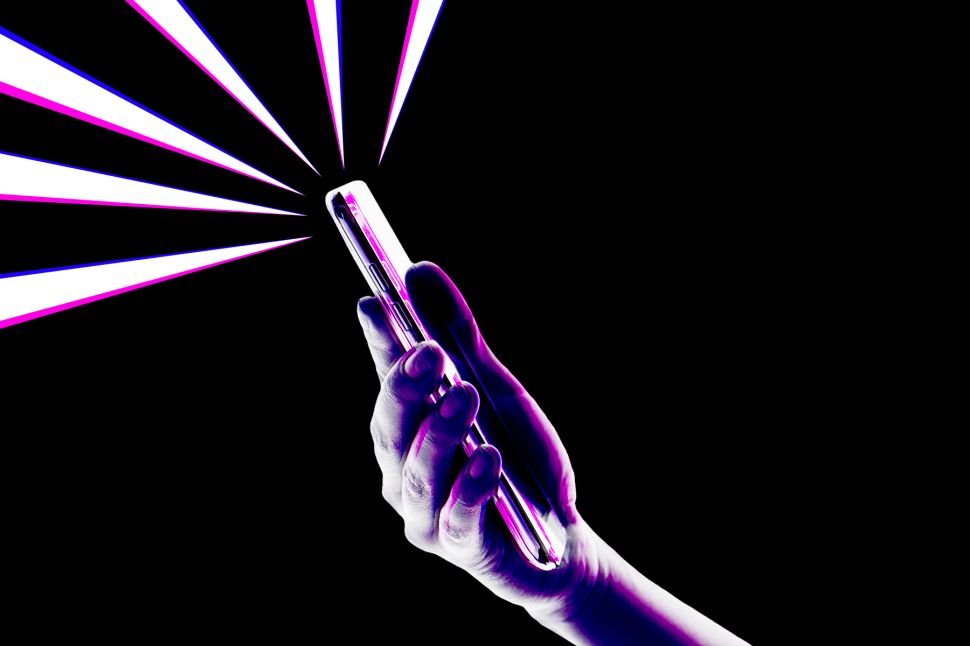