The conflict is over, and the dust—both the Thanos kind and the figurative kind—has settled. The current iteration of the Marvel Cinematic Universe has drawn to a close with Avengers: Endgame, and with it comes a new understanding of blockbuster capabilities. As that blockbuster annihilates our perception of what’s financially possible for the film industry, we’re left to ponder: What’s next for Hollywood? How does a studio compete with franchise tales like this that span decades?

Marvel ushered in the definitive era of the shared cinematic universe, and in the 11 years since Robert Downey Jr.’s Iron Man jump-started this journey, Hollywood has scrambled to keep up. Instead of single, standalone franchises such as Back to the Future or The Matrix, Marvel has popularized the idea of several connected franchises all feeding into one large nucleus.

The next would-be contender in this pursuit: Artists, Writers & Artisans.

In April, The Wall Street Journal reported that James Murdoch was making a sizable investment in AWA, a venture-backed comic book publisher led by Bill Jemas, the former publisher and chief operating officer of Marvel Enterprises. Founded last year, AWA is looking to create a shared universe of comic book characters that it can license for motion pictures, video games and other merchandise. The hope, as always, is to create the next MCU—a cross-platform blockbuster engine that powers consistent demand, profitability and engagement.

But is this really the best strategy in a post-Endgame world?

The Art of the Shared Cinematic Universe

There are two key factors to consider when attempting to launch a franchise-spawning web of connected stories, says Paul Dergarabedian, senior media analyst at Comscore.

“Number one: great content and great writing,” Dergarabedian told Observer. “Think back to the first Iron Man, which was a great way for the MCU to start. You need that first good movie to serve as a foundation. Number two: patience. It takes a very long time to develop characters and universes, and it takes a very long time to develop a character that audiences like that can then be melded into an Avengers-style team-up. Everything has to fall into place. This is no small endeavor.”

The biggest mistake, Dergarabedian says—and many audiences would agree—is when studios rush content to the marketplace without properly developing the scripts. It’s futile to try to capitalize on a trend based on a knee-jerk reaction, and when studios invest in chasing dollars and concepts rather than quality, they often wind up with a box-office flop. For example, Warner Bros. originally intended 2017’s King Arthur: Legend of the Sword to launch its own franchise with its legendary characters receiving their own self-contained introductory tales. But the movie was a massive misfire both financially and creatively.

Good ideas can be hard to come by, especially for a fledgling upstart like AWA. But the publisher seems to recognize that and is adjusting accordingly. AT&T’s DC Comics and Disney’s Marvel Comics do not historically guarantee creators a percentage of the licensing deals they strike, but AWA is allotting 20 percent of the revenue it generates from any option deals to the artists and writers who create the characters. By making them profit participants, AWA is showing that it truly values its talent (you know, beyond those dudes just spouting one-liners on camera). That’s a draw that could prove enticing to both industry veterans and talented rookies alike.

In theory, this could lead to AWA delivering top-notch storytelling. But will the market allow its ambition to become a reality? As Hollywood’s theatrical model continues to narrow it scope, is there even room for this sort of risk-taking ingenuity?

The Fate of the Franchise

Despite AWA’s alluring payment plan, the company will still be fighting an uphill battle to get its projects on the big screen. Its struggle is a microcosm of the challenge currently plaguing Hollywood: How do you get audiences to go see something new?

“I’m not sure the other studios can successfully develop top-tier blockbuster franchises anymore since there seems to be such an aversion to anything new to cinema,” Scott Mendelson, film critic and box-office pundit at Forbes, told Observer. “Yes, the DCU and MCU brands will still launch new biggies, and animated brands like Pixar and Illumination will still crank out original hits. But otherwise, at best we’ll see smaller-scale ‘new’ franchises like John Wick or Pitch Perfect.”

He added, “I still maintain that The Hunger Games was the last mega-bucks ‘new to cinema’ franchise we’re probably ever going to see outside of already established brands.”

Run through recent box-office history, and it’s hard to argue with that. M. Night Shyamalan’s Unbreakable universe may very well be the last original shared cinematic continuity to break out, and even its grosses never approached the record-breaking highs of Marvel, DC or Fast and Furious. (While Universal Pictures fell backwards into the F&F series, another original franchise, because of early casting complications, it has done a good job of developing its films into a worldwide sensation.)

Meanwhile, recent attempts at new-to-screen franchises—Robin Hood, Mortal Engines, Alita: Battle Angel—have been met with mixed-to-negative critical reactions and a collective shoulder shrug of indifference at the box office. As streaming and other at-home entertainment avenues continue to soak up more consumer attention, the theatrical landscape becomes exceedingly fraught with risk. In response, studios have retreated into the comforts of their own libraries—reboots, revivals, sequels, prequels!—rather than seek out new concepts.

Though Marvel and DC have proven that audiences have not yet tired of the superhero movie, the ugly truth is that launching a new franchise in today’s climate is a task of Sisyphean proportions. That’s where studios must get creative, adjusting their approaches or offering compelling counter-programming.

“You don’t have to have shared cinematic universes,” Dergarabedian said. “Jordan Peele is a universe unto himself. Get Out and Us are different movies, but everything is in some way branded and part of a universe, even if the films aren’t connected. They are interwoven, cross-pollinating pieces of content that create a sense of continuity and familiarity while offering up something fresh.”

According to Comscore data, which tracks the key reason why audiences attend a certain film through post-screening surveys, 40 percent of audiences went to see Us because of Peele—the highest figure in the survey’s history, notes Dergarabedian. The film went on to earn $252 million worldwide against a $20 million budget. But that type of brand image and audience connection is hard to recreate when you’re not a Steven Spielberg or a Christopher Nolan. As such, many studios are cutting their losses and quitting the game of franchise copycatting altogether.

“I think studios are moving away from the explicit cinematic universe because—save for WB’s The Conjuring and Monster-Verse—most post-Avengers attempts didn’t quite work,” Mendelson said. “DC has emphasized a new disconnected status, and even Star Wars didn’t cut it as a spin-off and cinematic universe vehicle.”

He’s right: Wonder Woman, Aquaman and Shazam! all took place in the same continuity but avoided any of the direct crossovers and team-ups that have yet to pop for DC, and the financial disappointment of Solo: A Star Wars Story halted Lucasfilm’s emphasis on anthology spin-offs. Singularity seems to be making a comeback.

But creative teams can’t simply give up because Hollywood has constricted the parameters of mainstream blockbuster success. Despite the crowded competition—even Netflix is setting up its own joint capes-and-cowls continuity—AWA offers a lot of upside. Talented visionaries would be foolish not to give it a chance and reap its financial benefits. However, as Endgame closes out the era that brought us to this point, one can’t help but wonder if the age of the shared cinematic universe is already over.

Dergarabedian is more hopeful. “The next big thing is already here,” he said. “We’re sitting in it right now. We just haven’t realized the is boiling.” 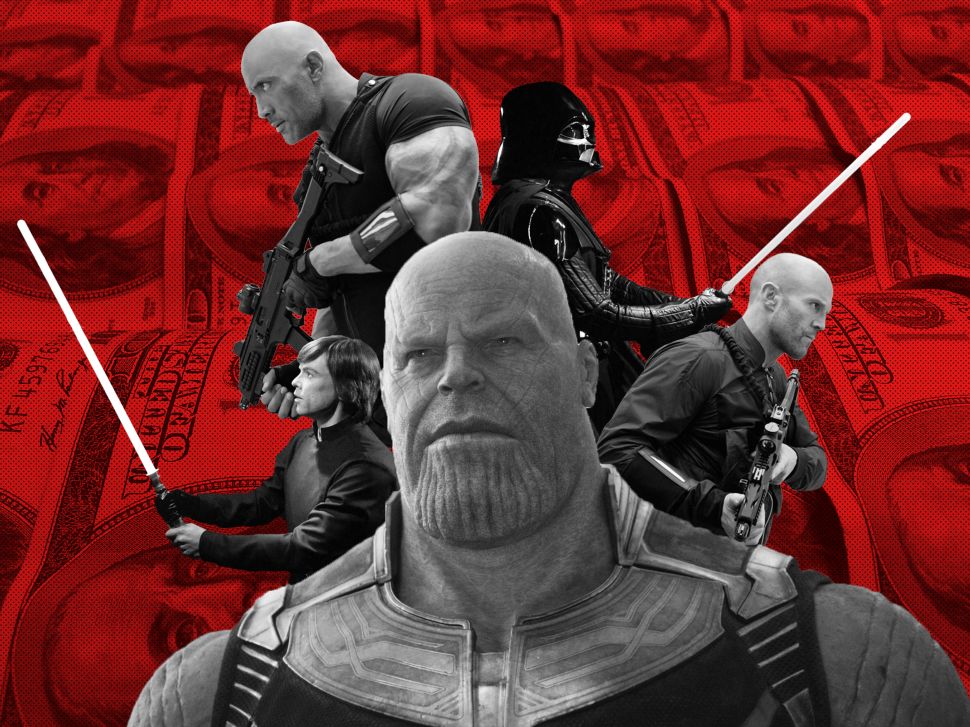