Camp? One phrase that you’re sure to hear this week is “I can’t define it, but I know it when I see it.”

The same could almost be said for “Camp: Notes on Fashion,” this season’s Gucci-sponsored Costume Institute exhibition at the Metropolitan Museum of Art (open May 9). Featuring items that play on parody, mockery, celebration, excess, queer identity, irreverence, fun and a few hundred other things, the Met’s own “Camp” video suggests how much the Costume Institute has taken on.

First, there’s the range. It’s far beyond anything imagined by Oscar Wilde, Andy Warhol or Susan Sontag. (The latter’s seminal 1964 essay “Notes On Camp” is saluted in the show’s title.) The pink and chartreuse exhibition catalogue reprints Sontag’s entire text. The underpinnings take us back to ancient sculpture, cross-dressing Victorians and to the opulence of Louis XIV in Versailles.

Then there is the problem of beauty. The Met is an art museum, after all. Jeremy Scott, for House of Moschino, reminds us that camp can be beautiful in an ensemble of butterflies in perpetual motion on a purple background. The camp element here, presumably, is in the sheer excess.

You could argue that “Camp” already began a year ago, when Andrew Bolton, the show’s lead curator, paired Versace jeweled bustiers and Gaultier leather with sacred objects from the museum’s medieval collection in the exhibition “Heavenly Bodies: Fashion and the Catholic Imagination.”

In his thorough catalogue essay, Fabio Cleto of the University of Bergamo writes reassuringly that “Camp does not make fun of things grave, momentous and solemn: it makes fun out of them, cherishing them as it transcends their solemnity into irony.” Sure, and I only go to Las Vegas to look at the art.

We’ll be hearing a lot from critics about the Met’s take on camp, but there’s no denying that some of the exhibition’s standout pieces perfectly exemplify that which is so notoriously difficult to describe.

The show’s figure-head, or one of them, is an ensemble in pink, designed last year by Bertrand Guyon for House of Schiaparelli—a head-piece of two flamingoes that rises like a heraldic crest. The word for this creation might be divine. It’s a salute to John Waters, the auteur who made Pink Flamingoes a household term. As Andrew Bolton responded at a press conference in the winter about the intentions behind a camp object, “only her hairdresser knows for sure.”

In the catalogue Bolton pairs the Guyon design with a quote from Susan Sontag. Camp, she said, “is not a natural mode of sensibility, if there be any such. Indeed, the essence of Camp is its love of the unnatural: of artifice and exaggeration.”

Hardly unnatural is the monochromatic number by Off-White, a little black dress and black boots, labeled, respectively, “Little Black Dress,” and “for walking,” by Virgil Abloh. Besides taking a dig at label-porn, it’s also a parody of Prada’s dogged self-promotion. Yet the label-art prize in “Camp” should go to Jeremy Scott, who put golden arches on a red dress that reads “Moschino, ‘Over 20 Billion Served,’” a twist on Oscar Wilde’s advice that one should either be a work of art, or wear one. It’s a stylish far cry from the Bloomingdale’s Big Brown Bag (by Massimo Vignelli), which turned shoppers into walking billboards in the 1970s.

No camp show would be complete without Andy Warhol. Marc Jacobs, with the Warhol-style celebrity portrait grid as a camp device, has printed photos of a gaping woman across a full length caftan. Oscar Wilde said either be a work of art, or wear one. Here, outrageous content liberates a conventional garment. In camp, there’s no such thing as overkill.

In the section “Gender With Genitals,” a ballsy summer ensemble by Jeremy Scott in pink and pointillist green has a fringed vest and a skin-tight open-crotched blend of chaps and bicycle shorts. In what suggests a uniform for an unnamed sport, Scott is playing for laughs as much as any designer in the exhibition. The ensemble comes with a catalogue quote from Richard Dyer, that camp “is a clenched fist on a limp wrist.”

Lest anything be left to the imagination, Walter van Beirenbonck and Vivienne Westwood (a frequent flyer in Costume Institute shows), offers two skin-tight body-suits, marked with details that identify male and female. There’s an antecedent to this camp adventure, the spoof on black tie formality in the form of a tight fitting long-sleeved t-shirt on which a tuxedo is drawn. Here, the female of the pair on view has a heart-shaped fig leaf (a favorite Westwood touch) and a hat with veil.

Vive la difference? We assume that the two body-suits are interchangeable. 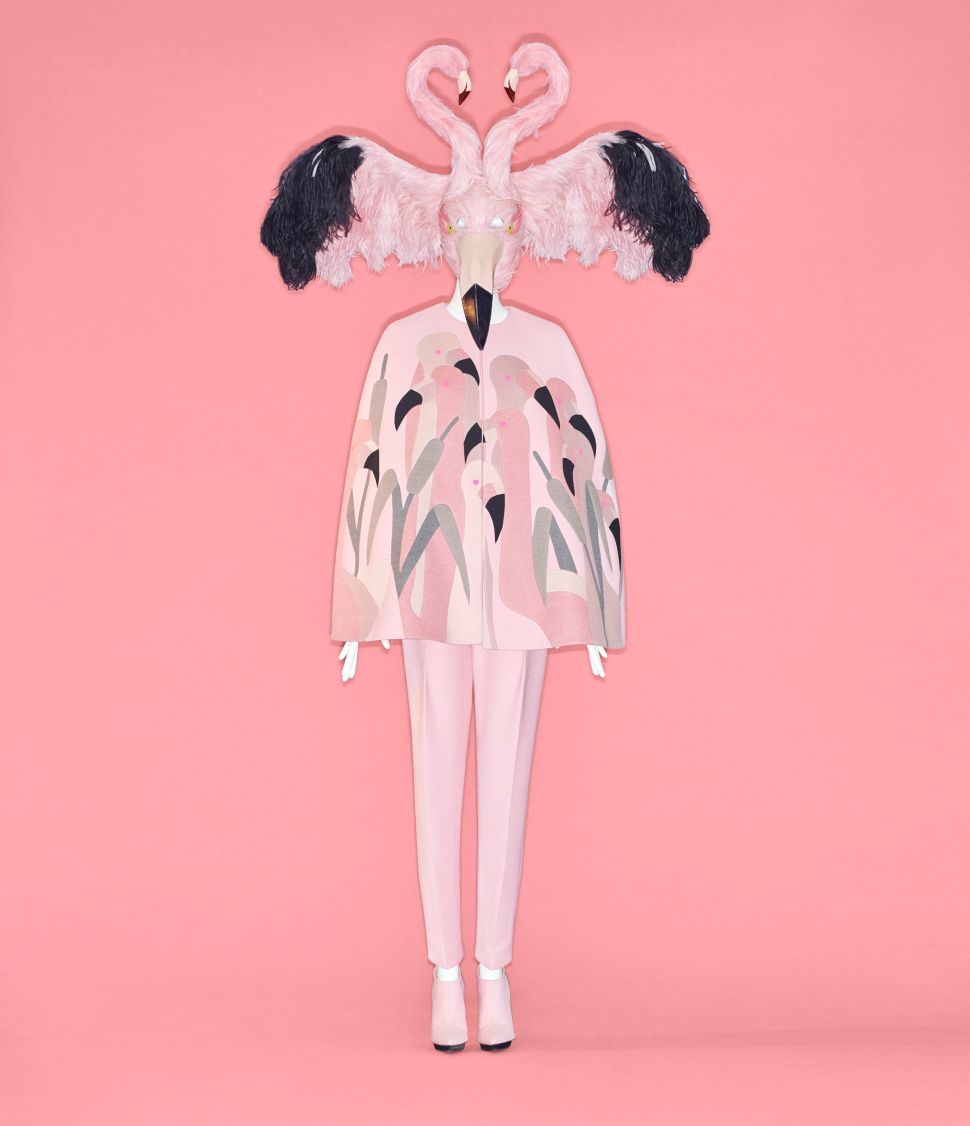