Columbia University, New York City’s Ivy League institution, is woke. Or at least Columbia tries to be, or tries to be as woke as an elite research university with a nearly $11 billion endowment marketing itself to the world’s most privileged can be.

But moorings such as these run very deep and are hard to escape no matter how much Fanon you assign or consume. Columbia is still in the world and still in the United States, where authorities treat people of color with suspicion or aggression. And so, Columbia last month had its very own racially charged viral incident.

This video was shot on the campus of Barnard College, which is across the street from Columbia and part of the university, at around 11:30 p.m. on April 11. The black man surrounded by the smooth-domed public safety officers is Alexander McNab, a 23-year old Columbia senior who studies anthropology. The officers physically restrained McNab against the bar of an on-campus cafe and demanded to see his student ID, because a few minutes earlier, McNab had strolled past a public-safety officer who had asked to see some identification. And McNab, tired of constantly being asked to show his credentials when other (white, Asian, non-black) students are not so challenged, decided to decline, triggering what he later told The New York Times was a “communicative act.”

After demanding in a raised voice that the officers leave him alone—the minimum reaction any boat-shoe wearing white man with an attorney in his family would have had, and far less shrill—McNab eventually showed his ID, at which point the officers left him alone. It was then that everything began. Within hours of the video’s posting to social media, Barnard’s dean issued a statement “deeply regret[ting]” the “unfortunate incident.”

Columbia deans emailed students apologizing for “anti-black racism.” The public-safety officers were suspended. If this had happened at a community college in Queens, you would never have heard about any of this. But since this is Columbia, and since Columbia is woke and also famous, The Root ran a story. Then the Times ran a story. On the other side of the echo chamber, The Wall Street Journal chimed in with a sneering op-ed, mocking the Ivy League kids for “play-acting” as “residents of Ferguson, Mo., chanting about police racism and brutality.” (You could almost hear the author’s polo-shirt collar pop in outrage.) University officials organized “listening sessions” and “reflecting sessions.” A female student at Barnard, still an all-women’s school (but Columbia dudes can hang out there and take classes) surmised that McNab was roughed up because he was a dude, and not a black dude, and her take received a write-up in Newsweek.

There was a panel during which McNab discussed the question of whether the university’s public-safety officers are “racially biased” with Coleman Hughes, another black Columbia undergrad and a writer for prominent conservative publications, like Quilette, where he posted a take that was pretty much the Journal’s, but written by a black guy, so you can imagine how that went. (“Yes, it is!” “No, it’s not!” “And—scene!”)

This might not cause much outrage or furor among internet-addled brains on to which images of police killings or ISIS beheadings are seared—the flap and the fury may even seem ridiculous—so let me try to put this in context for you.

I attend graduate school at Columbia University. (I am in the journalism school, which means I snuck into the Ivy League via the service entrance. I assure you, everyone who has heard me utter something in class believes my father must have donated $250,000 to the fencing team.) All universities are bubbles, as are many institutions in a city as enormous and variegated as New York, but Columbia is a very ludicrous bubble. I hope I can explain how unnaturally safe this place is, like a well-policed small-town utopia where nobody is armed and everyone eats at Shake Shack. At Columbia, people routinely leave expensive Apple laptops unattended in cafes or in the library, for hours. Nobody ever touches them.

Since you will ask: Yes. I have had public-safety officers ask me for my Columbia ID, when I’m at a computer at 3 a.m. or when I’m trying to watch Game of Thrones on a classroom projector. They look almost apologetic when they do it. “Just doing my job,” the look says. “Of course you belong here, white fellow.”

All this to say, it is a rare day that something happens, in public on campus, that you could call “exciting” in an adrenaline-including, “there is risk here, shit’s about to go down” type of way. So what happened to McNab was absolutely outrageous, while also entirely, hopelessly and depressingly banal.

Columbia does try. Columbia tries really hard. There is a Diversity Office. Lee Bollinger, the university’s president and an “affirmative-action advocate,” is committed to diversity. And there are results.

According to Columbia University’s own data, 16 percent of incoming American freshmen are “black or African American.” This would mean black people are in fact slightly over-represented at Columbia, as African Americans make up about 14.6 percent of all Americans. Columbia tries, but Columbia is still in the world. I am the only white male American in my concentration of 16 people; in my 40-person degree program, however, there are conspicuously no African Americans, only one black person, and almost every person of color is Asian.

The university hires lots of prominent thinkers and researchers, many of whom are not white. Sometimes you can even take a class taught by them. If you can’t—if they aren’t offered, or not offered to you, or you just can’t get into one of them, as was my situation—you will often find these writers and philosophizers and great minds at least approachable, if not available. Frantz Fanon, the militant anti-colonialist critical thinker, is required reading, which means you can find bankers and lawyers and industrialists who have read an argument in favor of visiting upon them violence.

But is is people like that, and authors, and readings of frothing Wall Street Journal op-eds skewering social-justice warriors, and miniature Brett Kavanaughs, who do most of the populating of places like Columbia— not people like Alexander McNab, “a visibly non-white student at a predominantly white university,” as he wrote, in a country that is (still, for now) predominantly white, in which non-white people are (still, forever?) treated with suspicion and violence.

The main justification for McNab’s stop and detention, according to public-safety officers, was that they’d received complaints of “homeless people” wandering around Barnard at odd hours. I have never seen a homeless person on campus (that I know of). Statements like “a homeless person looks like XXX” are worthless and ignorant—there is no homeless person uniform, and homeless people work very hard at blending in—but I feel safe in saying that McNab doesn’t look anything like one. It is not a logical excuse because there are not many logical reasons for a homeless person to be on campus, which is locked down. Doors need an ID swipe to open, most buildings have guards. A granola bar is $3.50, almost twice the price at the Duane Reade down the street, where folks hustling for pocket change can be found. If you were homeless, would you come here? No. If you were lost, maybe. This is not a safe space. The reason why McNab was stopped is so beyond obvious it doesn’t need mentioning.

McNab overreacted and went “communicative” because he was sick of public-safety officers demanding his papers and not someone else’s. I suspect public safety overreacted because they were tired of hearing someone overburdened with privilege, whose ID they generally did not check, complain about sharing spaces, probably with people who look too much like McNab. In America, worse stuff than this happens every day. Only at Columbia, where the ugliness of America still marches through the gates and disrupts the uncomfortable and artificial peace of the bubble, no matter how many listening sessions, can it become news. 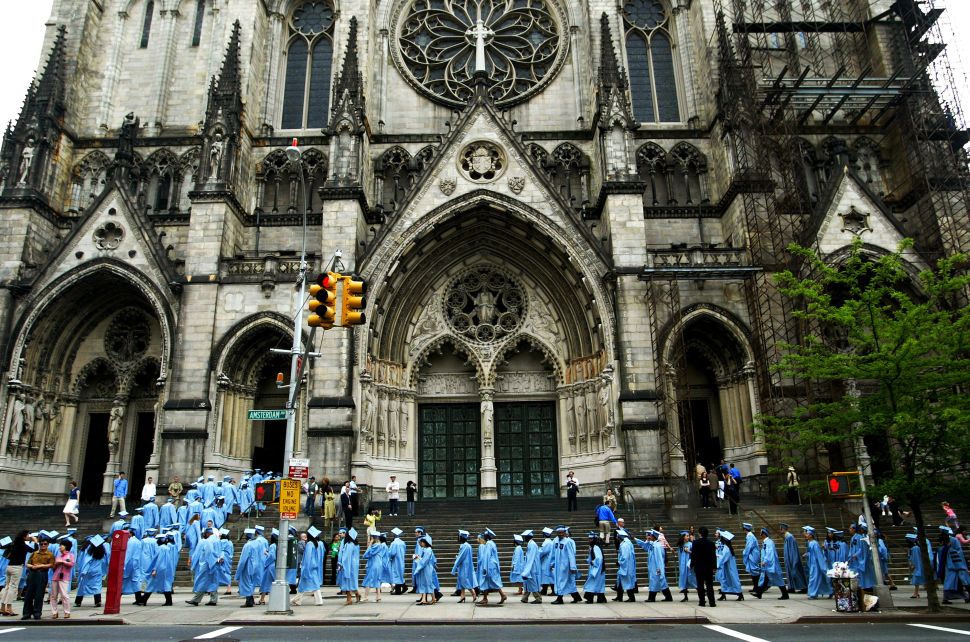