Mere moments after stepping through the doors of the Conrad Dublin, you’ll understand why the hotel is a frequent luxury-traveler favorite and sits atop various best-of lists.

It occupies an ideal locale just minutes away from the city center and St. Stephen’s Green, but it’s also nestled on a side street, so you won’t have to deal with any noisy crowds. Factor in its three restaurants and a truly impeccable level of service that includes a poem in your room upon arrival (like the one I discovered during my recent stint there), and you’ll feel like the place couldn’t be any more accommodating or charming.

It’s also distinctly Irish, with an eatery inspired by Gulliver’s Travels, the third largest craft beer bar in Dublin and the world’s first “limerick butler.” And don’t be surprised if you see some familiar faces when you visit—former President Bill Clinton and Hillary Clinton have reportedly checked in, as well as David Bowie. The hotel is known for protecting patrons’ privacy, and a Conrad Dublin spokesperson declined to comment on previous guests of the hotel, citing its guest privacy policy. During my visit, former Senator Joe Lieberman was dining at The Coburg, the hotel’s brasserie.

Here, everything you need to know about the fancy stay.

The recent renovation reflects the nearby Iveagh Gardens and local culture.

The Conrad Dublin received a multimillion-dollar renovation in the past two years, resulting in a sleek, modern, light-filled space inspired by the neighboring Iveagh Gardens. The lobby now has marble floors, a seafoam and neutral color palette, and plenty of garden-influenced details such as the tree chandelier and forest-like carpet. Similarly, the 192 rooms, which start at $317 a night, have nightstands shaped like bark, desks that resemble tree tops and Foxford throws that were handwoven in Ireland.

The hotel’s 1,800-square-foot Presidential Suite is the largest in Dublin.

The palatial suite occupies the top floor of the hotel, boasting a kingsize bedroom, a spacious living room with its own grand piano, a fully equipped kitchen and a dining table. Rates start at $2,580 a night, and climb from there.

Lemuel’s Bar & Lounge is named after Irish writer Jonathan Swift’s protagonist Lemuel Gulliver—the brass ceiling is actually a map of the character’s titular travels. The drinks menu is also themed around the novel, with cocktails like the Brobdingnag Sting and Horseshoe Punch.

…And some afternoon tea.

The hotel just launched a Gulliver’s Travels–inspired tea concept at Lemuel’s, where you shouldn’t expect the usual cucumber sandwich and scones.

“We want to be disrupters of the Dublin teatime,” Gary Rogers, the executive head chef, told the crowd at the launch event. “We want to take you around the world.”

He achieves this by crafting unique dishes like Goatsbridge trout mousse with caviar, cashel blue cheese tart, and coconut and mango panna cotta. For the official launch, the Conrad Dublin brought in Michelin-starred chef Eddie Benghanem of the Waldorf Astoria Trianon Palace in Versailles and partnered him with the hotel’s pastry chef, Brizaida Hernandez.

You can indulge in a tasting menu amid Hermès scarves—or go for a beer flight.

Splurge on the tasting menu at stylish brasserie The Coburg, where the walls are adorned with framed Hermès scarves, or go for a more casual situation at Alfie Byrne’s downstairs, where you can order a beer flight from a list that features the third-largest selection of craft beer in all of Dublin. (Just avoid my beginner’s mistake and refrain from doing this while jet-lagged.)

The “limerick butler” will whip up a custom poem for you.

The Conrad Dublin’s “limerick butler,” Stephen Clare, needs only two questions answered—”Who’s it for?” and “What’s it about?”—before composing your personal poem. He then immediately gets to work on his typewriter right in front of you, though he did let guests in on a secret.

“I don’t actually write limericks,” he told us. “They’re poems, but the name just stuck.” We suggested a few alternatives (“poetologist”?), but to be fair, it’s hard to beat “limerick butler.” 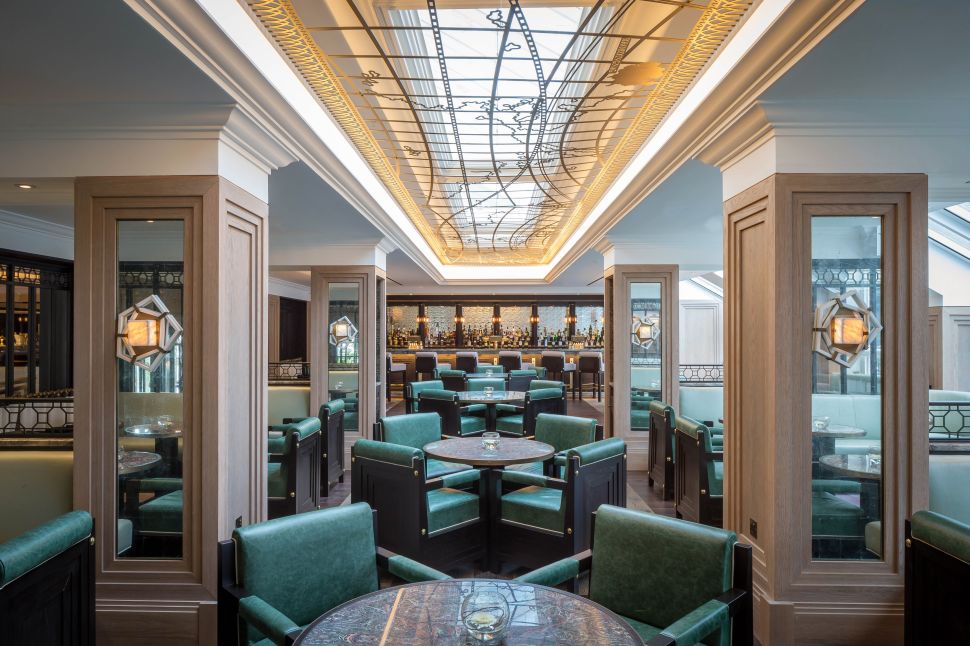