So you’re a restless teen, and you’re skimming Sam Shepard’s Curse of the Starving Class. Cool title. It’s about a miserable land-poor family out West. Mother Ella selfishly cooks herself the last of the fridge’s provisions: bacon and bread. Daughter Emma is furious that Ella boiled a fryer chicken that Emma had incubated, raised, slaughtered and plucked—for a 4-H Club project about quartering chicken. Emma storms off, howling with anger, leaving behind her hand-drawn charts about poultry prep. Sullen son Wesley? Per stage directions, Wesley unzips his fly, takes out his pecker, and starts pissing all over the chart on the floor. Ella just keeps eating at the table, not noticing. Whoa, wait; actors can just pee onstage?!?

Such punk-rock gestures won Shepard many an ardent young fan and polished his legend as the nation’s premier—hell, only—cowboy-poet stage nihilist, chronicling the decay of the American Dream in a series of torn, whiskey-spattered postcards from the frontier. Shepard was redefining mainstream theater by kicking holes in its phony sets with his beat-up Stetsons, and we loved him for it. Or rather, we did in his heyday, the 1960s through the early ’90s. In the cold light of 2019, Shepard’s blend of Pinteresque opacity, Beat Poet word jazz, and Pop Art recycling of cultural clichés seems inevitably dated and overtaken by more alienated and atomized dramaturgies (specifically dissecting technology and race). Such was the case in the Roundabout Theatre Company’s miscast and poky revival of True West. At the Signature, confident director Terry Kinney and a stronger ensemble fare better with Curse, which may be overlong and lopsided, but still throws off sparks of that crazy Shepard vibe.

A 1978 work poised between the playwright’s first decade or so of anarchic rock-and-roll experimentation (Cowboy Mouth, The Tooth of Crime) and the gothic naturalism of his middle phase (Buried Child, Fool for Love), Curse is a gruesome, gleeful demolition of the nuclear family and its fissionable discontents. Kinney schedules the demolition work early; as lights go down for the first scene, he amps up sound designer and composer Rob Milburn and Michael Bodeen’s ambient-rock cacophony as set designer Julian Crouch’s seedy suburban-kitchen set fractures into pieces: jagged chunks of wall hang suspended in mid-air; the prairie beckons from the outer dark. “Is this inside or outside?” drunken father Weston (David Warshofsky) later queries the maggot-infested lamb (real, cute) he finds penned in his kitchen. Yes, the border between nature and civilization is vanishing fast, if it ever existed.

Boundaries in Shepard’s realm are forever blurring and bleeding. The names of the family members—Weston/Wesley and Ella/Emma—signal that the kids are smeared photocopies of their progenitors, born to replace/replicate their parents. In the play’s second half, Wesley (Gilles Geary) discovers his newly (absurdly) sobered-up dad’s filthy clothes in the trash, dons them, and morphs into the wastrel patriarch. Emma (Lizzy DeClement) and Ella (Maggie Siff) each scheme to escape the squalor of the house, but their plans are doomed to fail. “It goes back and back to tiny little cells and genes,” Ella tells Wesley, with Weston passed out on the kitchen table. “To atoms. To tiny little swimming things making up their minds without us. Plotting in the womb…. We spread it. We pass it on. We inherit it and pass it down, and then pass it down again. It goes on and on like that without us.” This is Ella’s dazed explanation of the “curse” that attaches itself to the family: the curse of unstoppable, impersonal life.

As another part of the title broadcasts, the play’s keynote is hunger, and the refrigerator located stage right figures heavily into the action, frequently opened, consulted, talked to, and even replenished. “We don’t belong to the starving class!” Emma screams at her mother, who is stuffing her face with bacon and Wonder Bread. Later, Wesley will gorge himself on the contents of the restocked fridge like a ravenous coyote loping off the plain, tearing through a whole chicken, ground beef, cold cuts, tomatoes and a carton of milk. The family’s starvation is physical, emotional, spiritual, and it will never be remedied.

As written, the characters—debased sub-archetypes—are hard to care about. They blather too much, screech and commit mindless, selfish acts, and show no feeling for one another. They’re meat puppets for a restless, meandering theatrical imagination. That’s not exactly a criticism, since Shepard never claimed to write real people, clean stories, or dramatic moments meant to elicit our affection or sympathy. That’s partly what makes them so primitively attractive but also unsatisfying in action. Still, Kinney’s staging is tight and propulsive, and he guides the actors to unlocking pure moments of animal magnetism.

As the heartless mother, Siff is too young for her role, but shrewd and steely in an appealing, unsentimental way. DeClement has tremendous fun with the shrill, hellacious tomboy Emma, who seeks transcendence in a life of crime. Warshofsky is most effective, first as a ranting, filthy desert rat, falling-down drunk as he crashes around the kitchen, then demonically pleased with himself after he’s cleaned up and putting on the suburban-dad act. In the thankless role of Wesley, Geary does what he can with a character who has a rambling monologue at the top of the show, then a lot of cryptic, flashy business to do afterward—entering naked, gathering up the lamb, and taking it out to slaughter. Still, for the long (90-minute) first part of this production, Shepard’s black humor and the hard-working cast keep the gritty nonsense humming.

It’s the final 40 minutes after intermission where things go truly bonkers and, sadly, dull. Ella had planned to sell the house with the help of a lawyer-boyfriend (Andrew Rothenberg) and fly to Europe; Weston sold the house to pay off debts, but a club owner (Esau Pritchett) robs him. But what the plot culminates in an orgy of identity breakdown, car bombing, and yet more interminable monologues laden with heavy-handed nature imagery (an eagle and tomcat locked in deadly aerial combat). The only thing that could save Shepard from himself (by the way, read interviews with him about playwriting; he didn’t want to be saved) would be deep, surgical cuts to his shaggy, digressive scripts. Or bring in an audience of teens with an appetite for transgression; they might think it total badass. 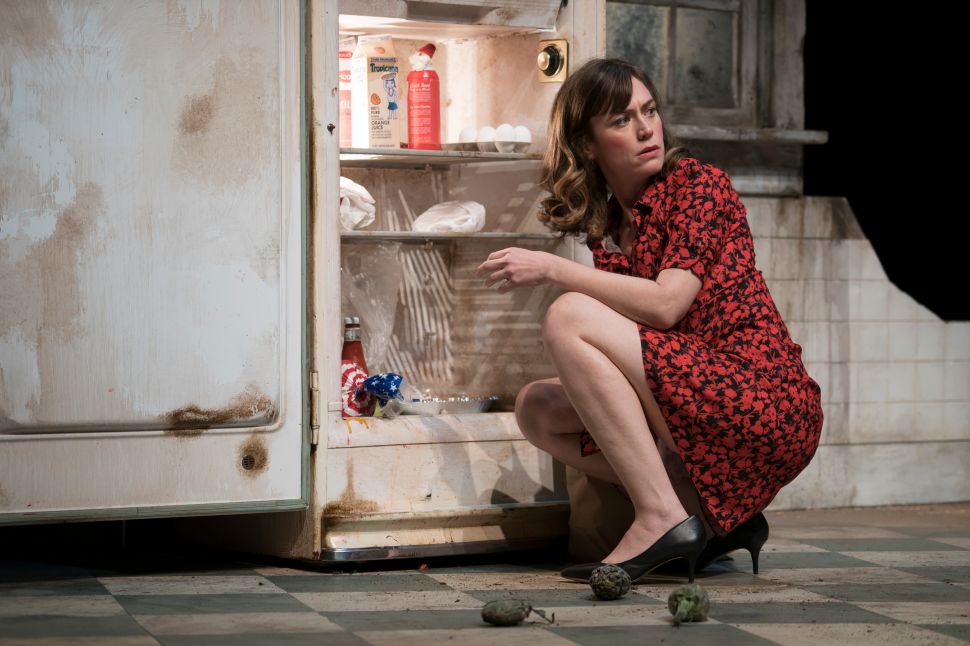