As the Metropolitan Opera’s 2018-2019 season—marred by new productions of egregious tackiness and revivals of the company’s ugliest,  most garish and most illogical stagings—winds down, it is quite simply a blessing to have a few performances vouchsafed to us of John Dexter’s splendid vision of Francis Poulenc’s Dialogues des Carmélites.

As the decades have passed since this production’s 1977 premiere at the Met (yes, it predates even Franco Zeffirelli’s classic La Bohème!), it has developed a fascinating patina of irony. The intensely spare aesthetic, a function of the Met’s struggling finances during the stagflation of the 1970s, has hardly dated over the decades.

However, unlike the opera’s main characters (a convent of Carmelite nuns who take a vow of martyrdom during the French Revolution), Dexter’s production has survived and indeed thrived. Stage director David Kneuss has recreated with loving detail both the show’s grand coups (the breathtaking reveal of the sisters lying prone in prayer upon a stage-spanning cruciform platform) and minute touches like the nuns’ reproving glances as novices Blanche  and Constance bicker during their chores.

The cast is superb. I might quibble for a moment about the sheer beauty of everything about mezzo Isabel Leonard’s performances as Sister Blanche. With that velvet voice and those film-star looks, she seems too poised, even a bit smug, for an aristocrat too morbidly sensitive to venture out of a convent. But there is no denying she is a perfectly opulent singer.

More to the point of the piece is Karita Mattila’s fierce, iconoclastic take on the elderly, ill Prioress who grudgingly accepts Blanche into the sisterhood. As Mattila portrayed her, the old nun was wracked with horrific pain from her first appearance, her whole body convulsing in agony, barely able to groan out her lines. Then, as the Prioress lost control, Mattila unleashed her dramatic soprano in giant waves of steely sound.

As her successor as Prioress, soprano Adrianne Pieczonka sang with modesty and immaculate musicality. Poulenc wrote for this character some magically glamorous high phrases that would not be out of place in Massenet or Puccini, but Pieczonka tactfully (and in character) refused to wallow.

If Erin Morley didn’t quite escape the trap of making the wide-eyed Sister Constance too sweet (she did chirp a lot, but blame that on Poulenc), the saving grace was that her soprano was always warm and perfectly true.

Yet more luxury casting brought us Karen Cargill as the manipulative Mother Marie, who essentially bullies the other sisters into their fatal vow. Her rich mezzo, though, made her case sound downright seductive. And tenor David Portillo shimmered in one of the opera’s few male roles, as Blanche’s heartbroken brother who begs her to flee war-torn France.

The music in this opera is so sweet that it can at times ooze into the sensual. (The new prioress has a moment of prayer in which the orchestra gets so jazzy you can’t help picturing the Savior as the young Alain Delon.)  But conductor Yannick Nézet-Séguin cut right through the sugar with a volatile, nervous attack that had me almost jumping out of my seat.

Under the Met’s music director, Carmélites is crazy music for a crazy time, as politically radical a gesture as anything in Dexter’s crackling staging. Nézet-Séguin was less than two years old when this production premiered at the Met, and yet Friday night’s performance demonstrated that he and Dexter are artistic soul mates. 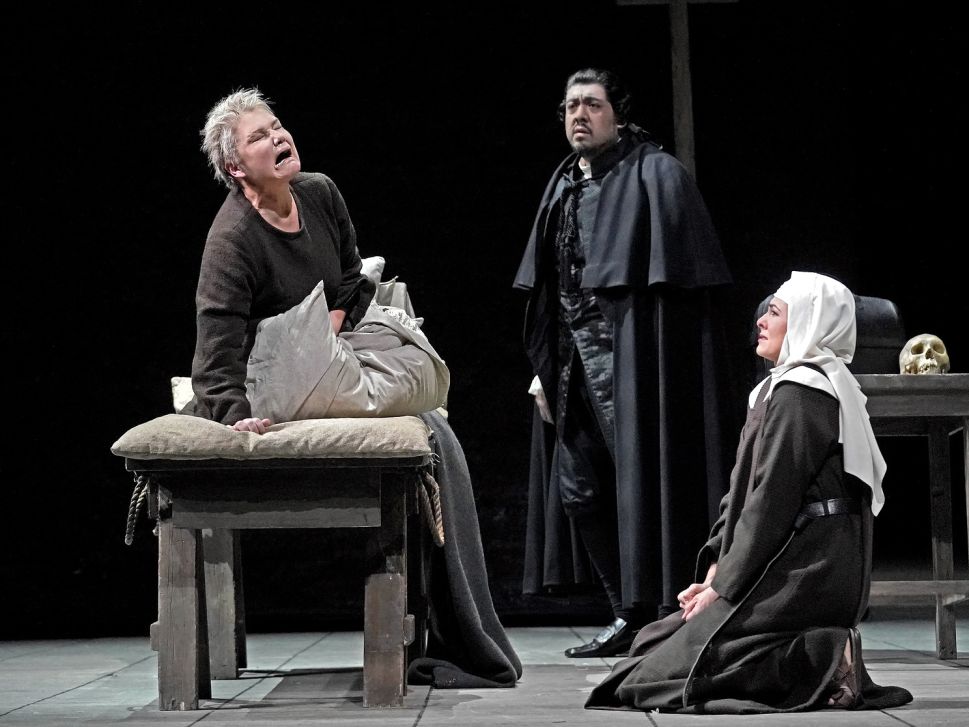