If you look at charts of worldwide wealth since about the year 1 A.D., it’s like a flat line and then all of a sudden at the end of the 19th century it makes a very sharp turn and shoots nearly straight upward. One could safely bet that there are more aristocrats today who can afford to buy exorbitantly expensive decorative objects, and want them, than ever before; the top one percent of the population today is comprised of many, many more people than it was 350 years ago. An upcoming auction featuring an item made in China called a “Dragon Throne,” created at some point during the mid to late 18th century, provides a good opportunity for us to consider the cultural relevance of how that history is embodied (and not merely because there’s currently an obsession with all things related to thrones and dragons).

So how many collectors out there might be in the market for a throne? When the object goes up for sale on May 14, it’s likely we’ll find the answer to that question. Christie’s London will host the special auction of what is billed as “A Very Rare and Magnificent Imperial Three-Color Carved ‘Nine Dragon’ Lacquer Throne,” or “Dragon Throne for the Son of Heaven,” Son of Heaven being a sacred title given to Chinese emperors since about 1000 B.C.

The throne is given a standalone catalogue, with an elaborate description that reads, in part: “The throne is finely carved through the red lacquer to the ochre and dark green lacquer and has a stepped back separated into three vertical panels each containing dragons chasing flaming pearls amidst dense clouds.” It goes on to note the object’s two sides carved in high-relief with bats in flight and more dragons, the rendering of an archaistic lotus scroll, and another bat suspending a chime near a duo of frolicking fishes.

The throne is ornate and certifiably regal, and estimated to fetch between $1.1 and $1.6 million. It’s a love seat-sized chair with a low back, intricately carved in three colors, with red lacquer covering almost the entirety. Zhang Rong, a scholar and director of the National Palace Museum in Taipei, in his essay for the catalogue, notes that the lacquering and carving process is extremely delicate and time-consuming, taking perhaps a year or more in total. The background is rendered in yellow lacquer, with the main carving in red, with green embellishments coming off the undulant clouds running throughout. It is decorated with nine major dragons on the backrest and sides (along with smaller ones around the waisted skirt), which were considered imperial symbols. The Chinese names of the bats and fish form a homophonous rebus meaning “May there be a superabundance of auspicious happiness,” a blessing that seems somewhat redundant to the ostentatious wealth the throne displays. It was made for the Qianlong Emperor, who had one of the longest reigns of any sovereign in world history (1735–1796), and presided over an especially prosperous and expansive period of Chinese history.

Among my curiosities about this object is its provenance. Both catalogue essays (by Zhang and by Rosemary Scott, a senior international academic consultant to Christie’s) cite clerical records and scholarship of the Chinese Imperial government from the period of the throne’s fabrication, with what amount to purchase orders and bills of lading—regular bureaucratic receipts necessary even today for procuring expensive, fancy, handcrafted furniture. Despite this granular and intimate record keeping from the 18th century, the origin of the throne is unclear—it may have been commissioned by the court, or it may have been a gift from a regional aristocrat. In other words, whose decision it was to bring this object into being is unknown.

What’s more, the only absolute provenance listed in the catalogue is “Private Asian Collection, acquired in Hong Kong in 1997.” In that year, Hong Kong, which had been leased to and administered by Britain for the prior century, was transferred to rule by Beijing. Part of the upshot of that event was the emigration of about half a million people who, in part, feared a crackdown by Chinese authorities, who might revoke the civil rights then enjoyed by Hongkongers. I’m curious whether the acquisition of this throne was effectuated by that transition—perhaps the wealth of an emigrating European colonist transferred back to a Chinese citizen.

If you look at charts on the concentration of global riches since about the year 1700, we’ve gone from Asia holding the majority of wealth, to it then dispersing to other places around the world, before now returning again to Asia; currently about 40 percent of the world’s riches are contained in the continent. That the throne is being auctioned off in London, which may be a fading economic power, seems like a poetic loop—if you want to call international markets and flows of capital poetic. Or blasphemous that a sacred title can be won by any old financial guy at auction. I don’t know. Global wealth has never been concentrated enough around me personally that I ever shopped for a throne. 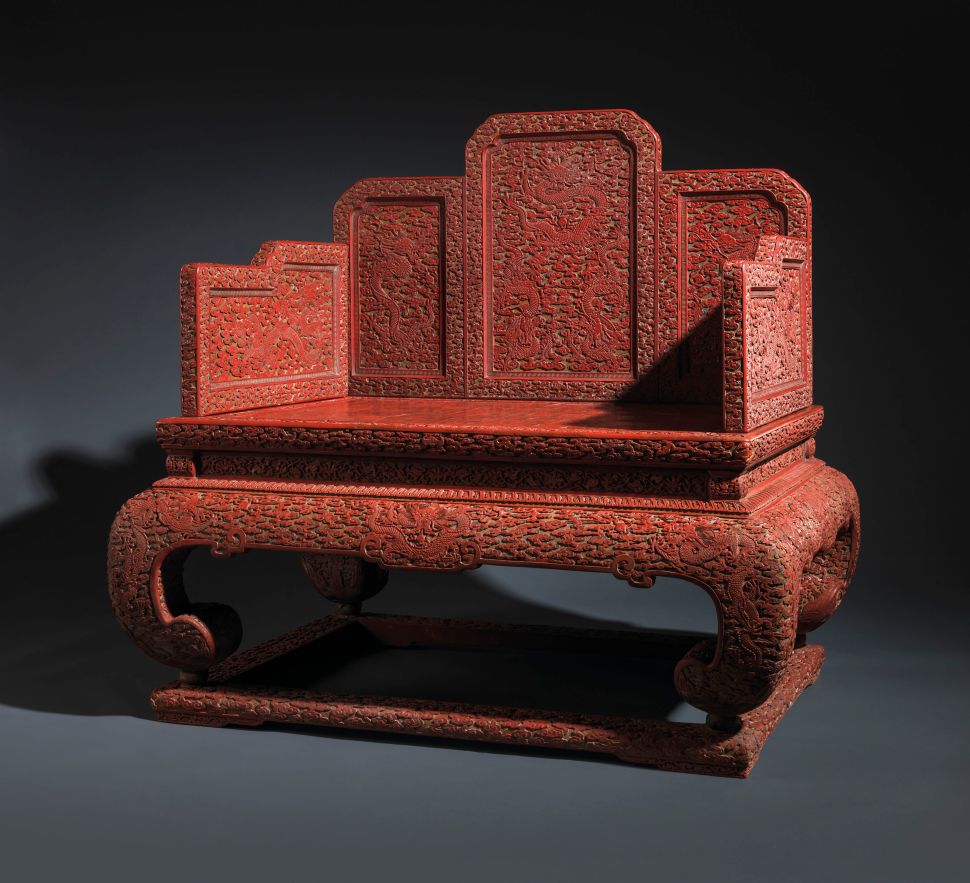