Chinese military strategist Sun Tzu said, “If you know the enemy and know yourself, you need not fear the result of a hundred battles.”

Well, some people didn’t get to know the enemy this past week.

An uproar erupted in the New York City comedy community when Milo Yiannopoulos was scheduled to appear at the Creek and the Cave in Long Island City. The controversial right-wing internet troll was to be a guest at the comedy venue for a live recording of the podcast “Legion of Skanks.”

But then, an online frenzy ignited to shut down the show.

People in the social media sphere attacked the venue (an independently run comedy club), the podcast for both being racist and promoting racism (hosted by one Puerto Rican and two Jewish men), and the owner of the club (a woman who has helped foster young comedians’ careers).

I got two takes on this: 1. Yes, Nazis are bad. 2. We on the left want free speech—but we also, apparently, want to shut down viewpoints that we don’t agree with.

One site declared that shutting down Yiannopoulos’ appearance was a fight against fascism:

“We denounce this gesture and wish to oppose fascism wherever it may rear its ugly head,” reads the site, despite the fact that trying to shut down free speech is, well… fascism.

Was the live show providing a forum? An exchange of opposing ideas? A missed opportunity to challenge an ethos face-to-face in a public forum?

Strange to hear people in the comedy community calling for censorship at a comedy club, when they too would hate if the goal posts were moved and their right to freely talk into a microphone in a dank room was taken away. (Scenario: A comedy club owner says you can no longer do anti-Trump material on stage.)

The “Legion of Skanks” show featuring Yiannopoulos was eventually moved to an undisclosed location.

“Joe McCarthy was done in when he was confronted by someone with intelligence and guts, before a live audience,” tweeted Malcolm Gladwell last fall, when former Trump strategist/xenophobic lunatic Steve Bannon was disinvited to speak at the New Yorker Festival. “Sometimes a platform is actually a gallows.”

Gladwell went on to tweet: “Call me old-fashioned. But I would have thought that the point of a festival of ideas was to expose the audience to ideas. If you only invite your friends over, it’s called a dinner party.”

Imagine, you could have seen Steve Bannon on the same bill as Jim Carrey—at the very least, it’s interesting.

In the case of these right-wing purveyor of spew-speech, I’d say, let them hang themselves with his own words on liberal home-turf; it takes away their power.

Over the years, in my journalistic exploits, I’ve not only infiltrated white supremacist hate groups, but I also spent time with the infamous Westboro Baptist Church. These are some of the most hateful people in the world. In the end, I walked away from these groups that I had feared thinking they were really just a bunch of floppy-shoed hateful clowns.

I got to know my enemy—and realized I need not fear the result of a hundred battles.

Shouldn’t people have been able to see Milo Yiannopoulos framed as a floppy-shoed hateful clown?

As Big Brother orator George Orwell said: “If liberty means anything at all, it means the right to tell people what they do not want to hear.” 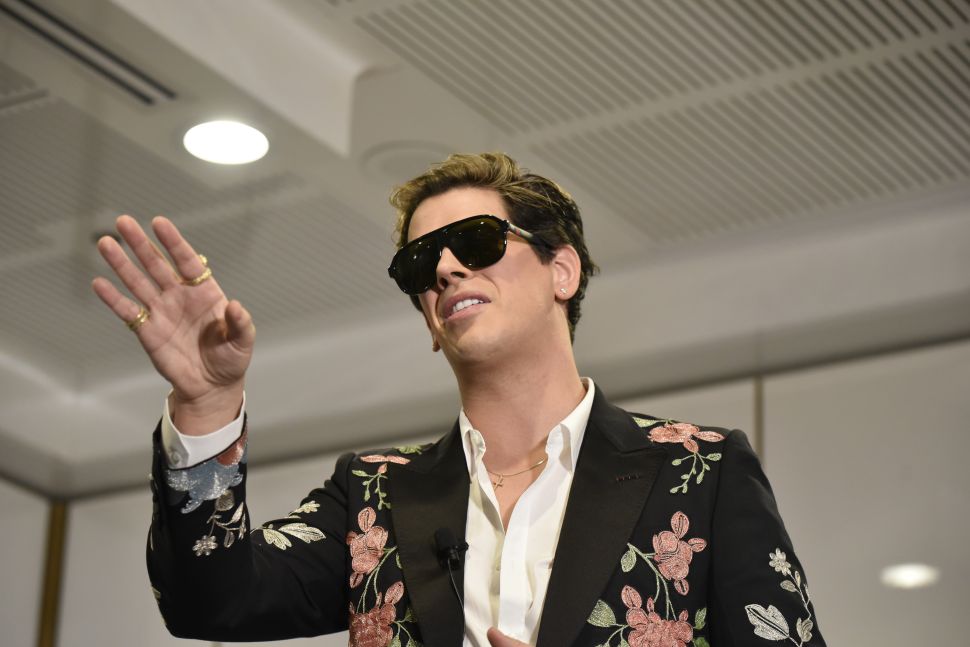