On my way to Randall’s Island, the location for this year’s iteration of The Frieze Art Fair, I spent most of my time worrying about politics. The night before, news broke that Special Investigator Robert Mueller disputed Attorney General William Barr’s summary of his 448-page report on Russian interference in the 2016 general election. That framed Barr’s testimony in front of Congress Wednesday, during which time he expressed the belief that, among other things, a president should be able to change a lawyer’s account to prevent further criticism.

The feeling reminded me of viewing the Venice Biennale two years ago, which took place in the midst of President Donald Trump’s firing of FBI head James Comey. At the biennial, everyone spoke fearfully of what would happen next and discussed a historically bad art show later.  At Frieze, though, nobody even mentioned Barr. Visiting Frieze, for me, was recognizing that our pre-election fears of normalized corruption, lies and crumbling democracy are represented by this fair—it’s apolitical, contextless and completely divorced from 2019.

This stands in contrast to many of the more tuned-in fairs and exhibitions cropping up around the country this past year. The most identifiable trend showcased by the 196 participating galleries at Frieze, however, builds on the pre-existing—a desire to make Instagram-friendly shows. As such, living room-colored walls, thinly painted canvases with screen-like luminescence and patterned pieces proliferated the fair, while unfriendly Instagram art like minimalist paintings and neon lights were almost absent. That’s not necessarily a problem—there are more highlights than I can list here.  But this year’s Frieze may be better described as a retreat from reality. We all need an escape sometimes. Yet there were a few booths that provided a mirror to our times. Assuming a three-hour commute on a boat to the fair and back feels like an adventure, not penance, make the trip for these following works and it’ll be worth it.

Sayre Gomez stitches together a sunrise, a wire fence and a glowing roadside sign to create an uncanny composition that feels both familiar and out-of-place at the same time. This extends to the context of the art fair, which featured very little of the once ubiquitous art stars dealing with advertising—Barbara Kruger, Jenny Holzer and Mel Bochner to name just a few. No single reason explains the fickleness of the art market, but it’s hard not to see this absence through the lens of larger cultural trends. Advertising, outside what’s found on strip malls and fast food joints, is now too targeted to serve as common cultural fodder. The result may be that as subject matter, it’s less relevant to artists and collectors alike—unless, as in the case of Gomez, it engages a kind of macabre nostalgia befitting of its time.

Similarly engaging nostalgia, William N. Copley’s 1975 homage to the comedian W.C. Fields at Kasmin Gallery’s booth weaves the entertainer’s quotes into the motif of the American Flag. Quips like “You can’t cheat an honest man,” “Never give a sucker an even break” and “At least it’s not Philadelphia” run over top each of the three scrolls. Copley’s double portrait of Fields and America plays out well today on all fronts, but for the jab at Philly. That city’s always worth a visit.

At the same booth, Roxy Paine’s carefully carved maquette rendering of an airline security checkpoint feels near electric, bristling with political overtones when it debuted in 2013. The viewing window alludes to a kind of theatre of illusions and outright deception. The cast, though, remains conspicuously absent, either signaling a shut down for the evening or the aftermath of a more dramatic event.

Ricci Albenda alludes to the 24-hour news cycle by replacing NBC’s Today Show sunshine logo with a bleary-eyed version of its evening show partner, The Tonight Show. It’s a simple, but clever idea that immediately communicates the effect of the media environment currently shaping culture.

It’s not easy to get a seat in Frieze’s first VR exhibition, “Electric.” With only eight headsets, thousands of fair visitors each day, and a 25-minute program that rotates only every half hour, spots were hard to come by during the preview. Expect the weekend to be worse.

To be honest, I’m still trying to figure out what to make of curator Daniel Birnbaum’s VR program, which includes the work of Anish Kapoor, Rachel Rossin, R.H. Quaytman, Timur Si-Qin, Koo Jeong A and Nathalie Djurberg and Hans Berg. The medium alone fits a kind of escapism that defines this iteration of the fair—particularly in the case of Kapoor, who renders a strange world in which the body and landscape collapse into each other.

The immersive experience certainly qualifies as entertaining but less than half way through the program I also felt like I wanted to vomit. That’s nothing to do with the content—just a response to the medium, which often causes nausea with extended viewing. Those who wish to experience the art at home can do so with the Acuteart App and a cardboard 3-D viewing device.

Matthew Ronay’s twelve discreet sculptures on view at Casey Kaplan were a clear highlight of the fair. A virtuoso craftsman with wood and dye, each piece seems to build on another.

A near 30-foot Chris Ofili painting depicting a mountain flocked by writhing figures and a collector glistens underneath the Frieze tent. The bright glow of the painting resembles that of a computer screen—or in this case, an IMAX theatre. It’s dazzling, and unsurprisingly, the fair’s unofficial selfie station.

Spelled out in dangling shoelaces plugged into the wall, Nari Ward’s piece We the People uses the first words of the constitution to allude to America’s deeply held, shared beliefs. This version, which is in Arabic, celebrates the values of inclusivity baked into the nation’s founding documents. 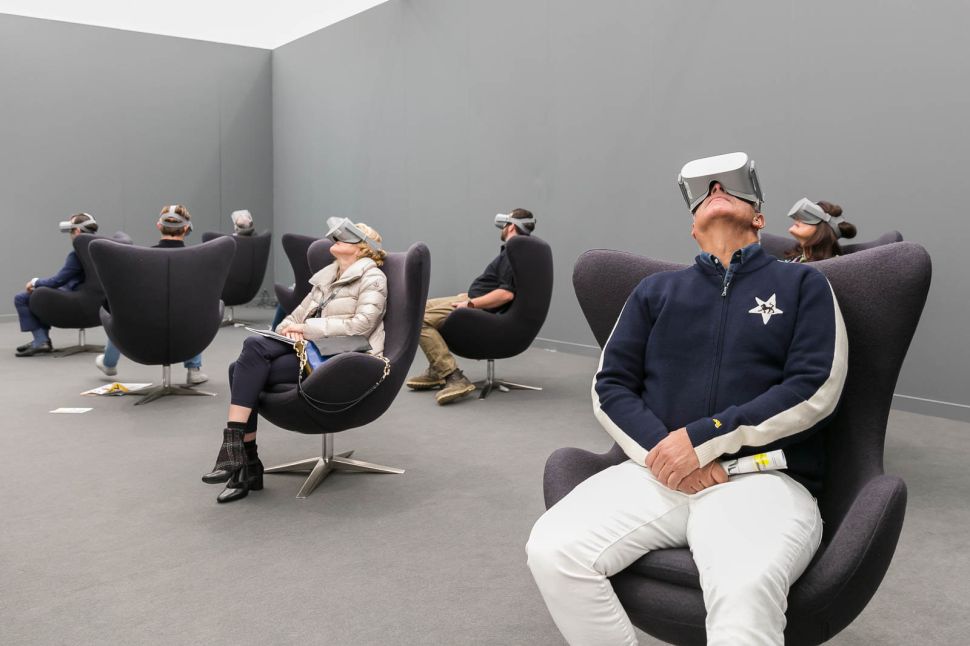