The first thudding monstrous footfalls roll across the theater and rumble your seat even before the images start.

What follows—from prehistoric trills, roars and wails to the sluice of gurgling lava or the crunch of a stomped building—is a master class of immersive, creative sound design. Godzilla: King of Monsters is a film that seems to paint with sound—sometimes Pop Art, but more often large canvas Jackson Pollock splatter.

Sound is not just a tool in this film: it’s the main focus. The story is a built around something called the Orca, a biosonar machine that can talk to the animals, Rex Harrison-style. Or more precisely, it can converse with the Titans—the super-sized species to which our titular 400-foot lizard belongs, seventeen of whom have been in deep slumber at different sites around the planet. The good guys can use the machine to chill the creatures out, while the bad guys—including a eco-terrorist played by Game of Thrones’ Charles Dance—can use it to rile them up so they can lay waste to Earth-destroying human society.

Of course, if you find yourself paying an undue amount of attention to a movie’s sound design (it was created by Erik Aadahl, an Oscar nominee for his sound editing on last year’s A Quiet Place, 2012’s Argo, and 2011’s Transformers: Dark Side of the Moon), it is usually an indication that there’s probably something lacking with the film, and that is certainly the case here. The guttural growls and plaintive moans of the Orca are far more compelling than most of the dialogue.

They are also considerably more emotionally resonant. Like Avengers: Endgame, current cinema’s reigning titan, the bulk of the action takes place five years after the devastation of the previous installment, 2014’s Godzilla, which was the 34th film in the venerable franchise that dates back to 1954. But you never feel the weight of the devastation, despite the fact that the main thread of a story is a family—paleobotanist Emma (Vera Farmiga), animal behaviorist Mark (Kyle Chandler) and their teen daughter Madison (Millie Bobby Brown)—torn apart by that tragedy.

You also feel little shared connection with the beasts—nor do they to each other. This is despite the fact that we are regularly reminded that the rivalry between Godzilla and King Ghidorah (the three-headed interloper from another planet and pretender to the throne) is as old as time itself. Fittingly, their final showdown is in Fenway Park.

Seeing these two grapple each other—the CGI equivalent of Andre the Giant facing off against Big John Studd back in the day—is of course the chief selling point of the film, just as it was when the draconic behemoth first shot electricity from its three mouths in 1964’s Ghidorah, the Three-Headed Monster. It’s an epic match-up that is genuinely thrilling, and provides some of the few moments when director Michael Dougherty’s film visually meets the high bar set by its sound. But the classic face-off arrives in an emotional vacuum rather than as an earned catharsis; the big fight never feels like a payoff.

Every bit as valiant a battle is waged between the mostly talented cast and the words—often pseudo-scientific jibber-jabber punctuated by unnecessary explanation (“Dude hates Titans”)—they are forced to utter. Of the human characters, Bradley Whitford’s flask-swilling crypto-sonographer, shifting between countdowns (“ETA to Monster Zero, 60 seconds!”) and incongruous wisecracks, registers best, along with Ken Watanabe, returning from the previous film as a compassionate scientist.

Watanabe even manages a few engaging platitudes, including one about how making peace with the demons that caused our wounds is the only way to heal them. There is also an initially heroic character who becomes so radicalized by the declining state of our environment that they team up with the bad guy extremists. Both ideas almost resonate in our era of divisive rhetoric and high stakes—almost. But Godzilla: King of the Monsters has only a passing interest in contextualizing its story with real world significance in the manner of the Toho classics.

Larger ideas generally remain locked in an arctic deep freeze, just like one of the creatures at the start of the film. But in the film at least, when the ice cracks, you hear the glorious sound it makes deep into your bones. 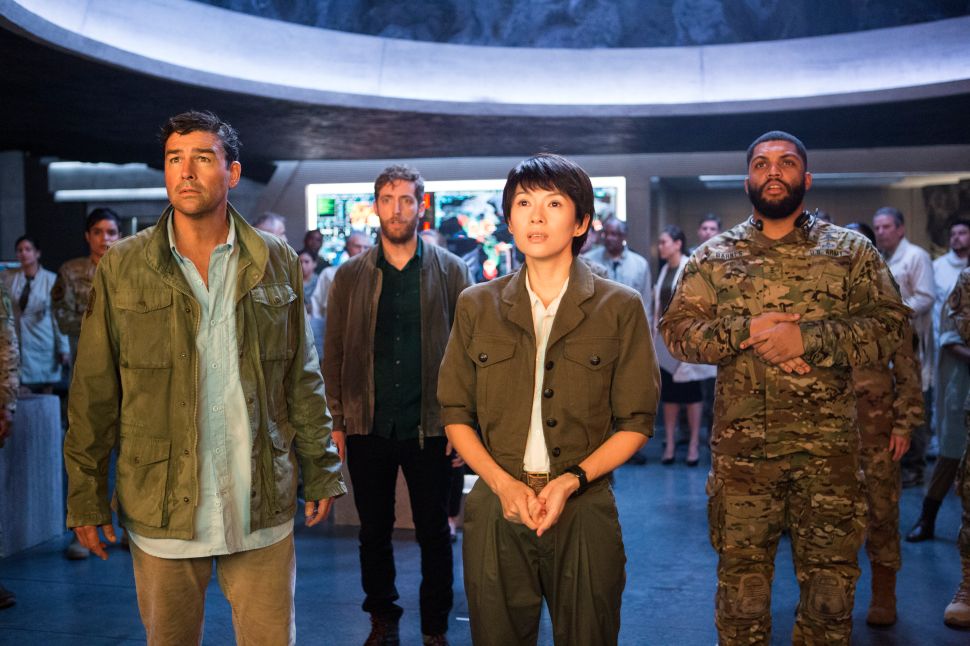