The gasp could be heard across the land during the Grammys this year. For once, it had nothing to do with a fashion faux pas or the awards themselves.

During a commercial break, audiences got a sneak peak of the upcoming film Aladdin, another in the seemingly unending string of efforts by Disney to revisit their animated classics by teaming live actors with generous helpings of CGI. The sight of Will Smith—with whom anyone who has engaged in pop culture over the last three decades has had a complicated and memorable journey—affixed with a top knot and painted up like an overzealous Kentucky Wildcat fan felt all kinds of wrong. Reactions on Twitter and around coolers the next morning ranged from amused to perplexed to incredulous: What was Will thinking?

So when Aladdin finally reaches theaters this week, it felt less like a movie release than the conclusion of a giant corporate walk back that began moments after that initial botched rollout in February. In that limited context, the movie is a success.

Which is to say this Aladdin, directed by Guy Ritchie, is not the disaster we dreaded it might be. Smith enjoys his opportunity to be the film’s master of ceremonies, and he is surrounded by a pair of charming and game leads in relative newcomers Mena Massoud (Aladdin) and Naomi Scott (Jasmine). It can be fun to play “spot the update,” whether it’s a revised song lyric, reimagined background element, or added plot device. (The Genie gets a love interest!) The new film never lags and some of the sturdiest elements from the original—namely the catchy and descriptive tunes by Alan Menken, Howard Ashman and Tim Rice—remain every bit as strong as they were in 1992.

The new telling brings little that feels essential, and the missing elements—chiefly, the controlled chaos and unbridled comedy of the late Robin Williams’ vocal performance—have given the film’s candy-colored visual palate a homesick pall. The lack of comedy is an issue throughout: it’s a problem when Billy Magnussen, playing a foppish Scandinavian-seeming suitor, gets almost equal the laughs as Smith’s Genie. Even the parrot (Alan Tudyck taking over voice duties from Gilbert Gottfried) is bereft of punch lines.

Moreover, while less pronounced in the film than in the short snippet of a trailer, the problem we all spotted this past winter persists. There is something off-putting and a little tone-deaf about Smith—who is best when he is defying authority in films like 2001’s Ali or 1997’s Men in Black—playing a wise and magical being beholden or otherwise in the employ of others. Call it the Bagger Vance conundrum.

He is in fine fiddle throughout the film, but much of the joy of the original Aladdin was how the film seemed tailored around Robin Williams’ studio antics—as if the movie itself was the bottle that could just barely contain his spirit. Here it’s the other way around: Smith contorting his crowd-pleasing street smarts to fit the contours of the film.

The primary new features of the movie are the constantly moving, swooping and gliding camera that make the experience feel like a theme park ride (a better name for the movie might have been Soarin’ Over Persia) and a more empowered Princess Jasmine. To this end, Jasmine gets a new song, “Speechless,” about finding her voice after a lifetime of being told to keep silent. While both of these new elements are handled competently by Richie and Scott, they come off as decisions made with their commercial appeal solely in mind rather than their artistic presentation. That is to say, while Scott sings it well, the newest song is the weakest in the picture.

Still, one leaves the theater more relieved that they didn’t totally screw things up than troubling too much over how they could have done it better. (Of course, it would have been nice, for example, if they had delved into some of the more nuanced aspects of Persian culture rather than using a 2500-year-old civilization as a stunt course for the title character to show off his parkour skills).

It may not be a whole new world, but it is a pleasingly familiar, if wholly unsurprising one. 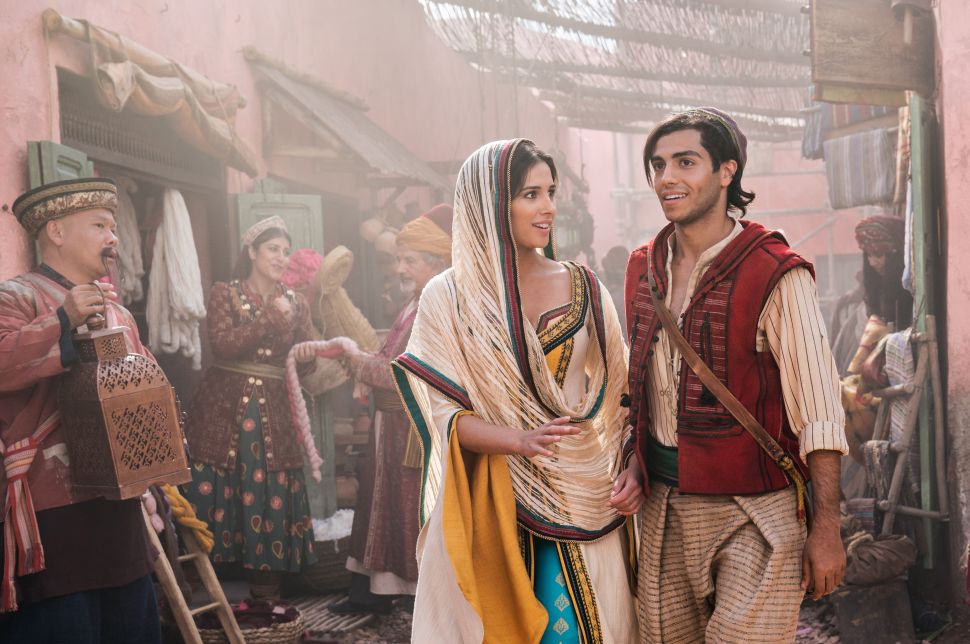