In my defense, Hooters on Mother’s Day is a real thing. The restaurant chain’s website says they’ve handed out over 300,000 free meals to moms since 2011.

As soon as I learned about such a wild promotion, the wheels started turning. What is Hooters like on Mother’s Day? What kind of person brings their mother to Hooters on Mother’s Day? And most importantly, could I be this person?

One quick phone call later, I found out that I was, indeed, that type of person.

“Free wings, I love wings,” my mom said as we were getting ready to leave.

“I wonder why they don’t give free breasts though?” she pondered aloud. “Is that because moms already have those?”

“I don’t know,” I responded dejectedly.

Then, she cackled and I felt a sinking sensation in the pit of my stomach. This might not be my best idea. Whenever I am about to do something, I ask myself, “Self, what is the weirdest and funniest way to go about this?” If I can answer this one simple question, I usually try to commit as quickly as possible. This is my burden. Frankly, I feel like Atlas sometimes, but instead of holding up the world, I shoulder an ideal: goofy, juvenile, carefree fun still exists. It’s hard work.

I was beginning to have second thoughts. Neither of us had ever been to Hooters, and my only experience with the joint comes from The Office. I felt like damn Magellan.

But this was my mother. My sister and I used to make her breakfast in bed on Mother’s Day, and now I was going to take her to Hooters. What went wrong?

We walked into the establishment at 12:30 p.m., because what’s more classic than a Mother’s Day brunch? There was nobody in the downstairs area. The bar area was roped off. Two dudes sat at the front desk.

They told us that Hooters was “not lit” right now.

My mom asked what that meant, and we tried to explain to her that lit basically meant poppin’ which was basically like a party. Eventually she got the idea.

We went upstairs and took our seats. There were some couples, mostly young, and a large number of middle-aged white men at the bar. I spotted one table while we were eating that looked like it could be a Mother’s Day situation, but the restaurant seemed to have about as many TVs as people.

College lacrosse, the Yankee pregame and a workout infomercial played as we looked at the menu and the Mother’s Day special. Some locations give free meals to mothers on their special day, while others, such as the one we were at, offered a buy-one-get-one free promotion.

This deal gave us the options of: 10-piece wings (traditional, smoked or boneless), a chicken sandwich (grilled or buffalo), chicken salad (also grilled or buffalo), or a Hooters Burger. Whatever that is. Plus, we needed to purchase a drink. We asked if a seltzer qualified, and our waitress told us she would have to check with her boss. Clearly not a ton of people had been asking these important questions before 1:00 p.m.

The waitress came back and told us that we were in the clear with seltzer, so my mom ordered hot wings “naked,” and I got the original wings with Honey Thai Chili Pepper sauce. Only fake people get boneless.

After ordering, most of the afternoon was spent watching my mom loudly read a wikiHow article called “How to Become a Hooters Girl: 15 Steps (With Pictures)” in the restaurant, while critiquing the waitstaff as they walked by, checking to see if their pantyhose were the right shade of “Suntan,” and if their shoes were white enough.

I tried not to stare.

I did find it interesting that every waitress has to keep her midriff covered with her tank top and avoid showing tattoos. I could think of any number of bartenders (male and female) over the years who would be immediately disqualified from a position at Hooters for these exact reasons. Maybe my impression of Hooters was wrong. My mom and I both walked into the restaurant thinking it would be one step below a strip club. Instead, it seemed like a sexy Applebee’s. Hell, they even played Jimmy Buffett at one point.

Our food arrived with the order backwards. The Thai wings were naked, and the hot wings were classic, but we ate them anyway. We both agreed that Buffalo Wild Wings was better, but our Hooters meal was still actually pretty good. (Side note: I had stomach troubles when we got home, and my mom took a nap. Neither is out of the ordinary, but worth mentioning.)

The place started to fill up, but I was ready to get out of there. We had accomplished what we set out to do, and I wanted to go home. I asked the waitress about her Mother’s Day experiences while we paid the check and packed up the leftovers.

She said we were her first table of the day, but that last year was busier because it wasn’t raining. Apparently, they do generally see more customers on Mother’s and Father’s Day.

We all laughed in agreement.

While my mom was in the bathroom, I talked to some families seated around the restaurant.

The first had a mom and two sons, and didn’t speak English. The second was a young mother with her boy, about six-years-old, who didn’t know about the Mother’s Day special. “We just know the wings are good,” she said. The third family also didn’t know about the free wings. Could it be that Hooters is more of a family restaurant than I thought?

One of the managers said that four or five people had taken advantage of the deal, so far, that day. He said they were expecting more, but not too many because “we’re Hooters.”

We walked out and saw the Hooters gift shop and pick-up area. I don’t know why anybody would want to order Hooters food to-go. The idea seems to undermine the boobs and chicken business model.

My head was spinning on the train ride home. Maybe I was wrong about Hooters all along. Maybe the cover and the book were not the same at all. Fifty Shades of Grey never was a novel about the inner workings of a boardroom like I had once thought. I could be wrong again.

I decided I would go back that night, and see what really went down.

That is how I found myself sitting at the Hooters bar, alone on Mother’s Day, nursing a seltzer. Indeed, it was pretty tame. Maybe because it was 8:00 p.m. on Mother’s Day, but maybe because my judgement had been incorrect all along. Men and women looked at menus. Two young men had their eyes firmly focused on the basketball game. A couple got up to leave with their young baby and small boy. My prejudices crumbled around me like the Red Keep after being blasted by the dragon fire that was in my stomach after trying to digest those wings.

I talked to some more staff, who all pretty much said the same thing: Even though they only hire attractive, busty, athletic women, Hooters is more of a family restaurant than people give it credit.

“I would say this is a good family restaurant,” the man at the door told me.

“The stigma that comes along with it is something that the corporation has been trying to change for the last 35 years,” added a manager.

I’d had enough. It was time to go. Walking to the train, I was grateful for my newfound understanding and improved outlook on Hooters—even if it came during one of the tamest days of the year, and not on a Friday at 11 p.m. Maybe being there during March Madness would offer a different point of view, but that’s another story.

“It takes a big man to admit his mistakes, and I am that big man.—Michael Scott.”—Lucien Formichella. 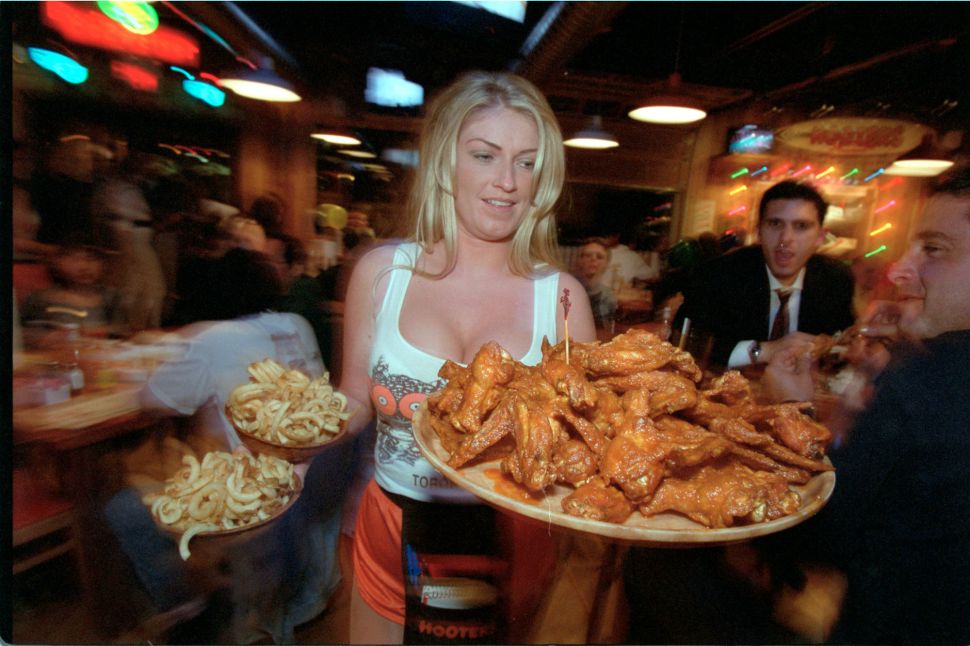