One of the first things Phoebe Waller-Bridge’s charming, wounded, brilliant character quips into the camera in the immaculate second season of Fleabag is the open-ended question, “You know when you’ve done everything?”

Fleabag, our unnamed heroine, is quite convinced that after scraping herself away from the trauma of losing her mother and best friend (this saga was covered in Season 1) and arriving at some approximation of inner quietude, she’s experienced the full spectrum of human emotion. Therefore, the audience immediately deduces, Fleabag thinks she has nothing else to learn. Of course, this turns out not to be the case, because before she knows it, she’s fallen head over heels in love with one of the most painfully unattainable men a human being could ever meet: the Hot Priest.

The genius of Fleabag is in the details, including but not limited to putting the hot dirty priest in THIS Hot Man™️ shirt, the shirt of hot men. pic.twitter.com/TK6mAUJCdo

Because Fleabag is an amazing show—and because tons of people have been watching it here and in Britain (where it came out a couple of months ago)—the internet has been subsequently set aflame with a wide variety of commentary about the merits and supposed shortcomings of the Hot Priest, who’s played by the masterfully sensitive-seeming Andrew Scott. Some people, who are wrong, have succumbed to the backlash cycle and proclaimed that the priest actually isn’t that hot. Others have been more inclined to push back against his character. Hot Priest isn’t truly in love with Fleabag, they claim. In fact, he’s just manipulating her. This, too, is wrong.

In fact, the reason that Season 2 of Fleabag hits so hard is because the narrative tragedy that writer and star Waller-Bridge constructs is shot through to the core with truth. The truth, to be clear, is that the Hot Priest is Fleabag’s soul mate. From the moment the two characters meet, it’s apparent that they compliment each other achingly well. He’s earnest whereas she’s cynical; he exudes a boundless enthusiasm for living that she (at least currently) lacks. As many have also pointed out, he sees through her so completely that he actually starts to notice when Fleabag turns to the camera conspiratorially to say something witty to us, her loyal audience.

Further into the season, something truly shocking happens: Hot Priest looks directly into the camera, following Fleabag’s gaze. We make eye contact with him, and it’s as potent a jump scare as anything we’ve seen onscreen this year (yes, even Us). That’s what it’s like when someone you’re dating breaks down your defenses and intuits that you’re not saying exactly what you mean or feel. It’s terrifying and thrilling simultaneously.

Ultimately, even as Fleabag reconciles with the fact that she can’t be with the person she loves, she understands that she has to be more like him and stop leaning on the crutch of emotional dissociation. This means that she has to abandon her sly asides to the camera, which she seems to do. She walks away, out of our lives and into an uncertain (but hopeful) future, coyly looking back and waving goodbye.

For all you naysayers out there, sure, it’s a bit objectively ridiculous to develop an earnest crush on a Catholic priest who isn’t allowed to have sex. But, hello, how many BuzzFeed listicles have been written about falling for cartoon characters? Shit happens. 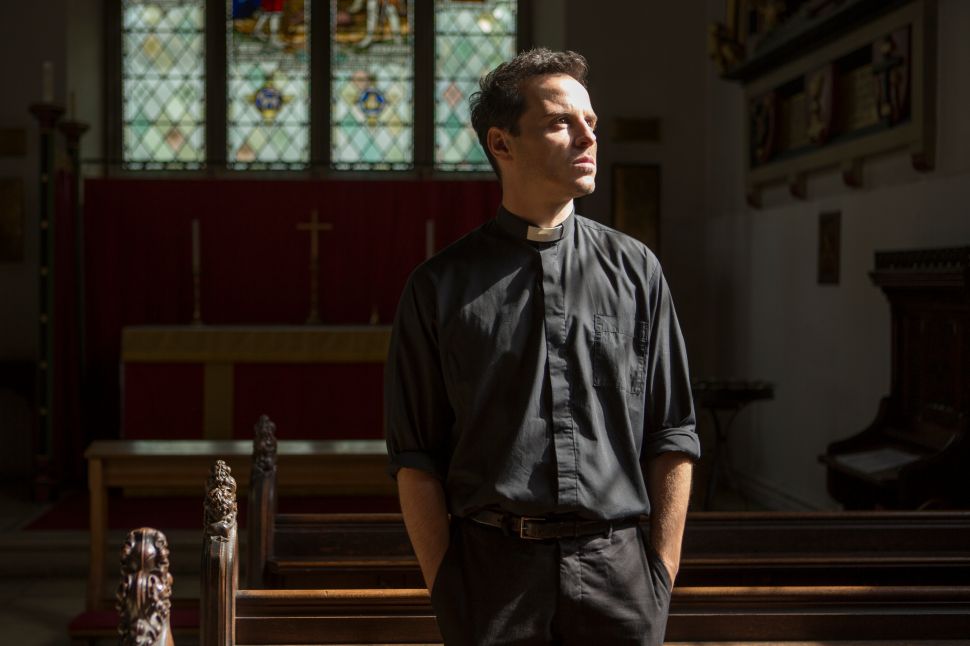