The Hotel Café Royal’s glitzy history goes all the way back to the 1860s, when a French wine merchant opened the building as a meeting place, restaurant and bar. It quickly became a favorite and over the years welcomed patrons like Princess Diana, Elizabeth Taylor, Mick Jagger, Brigitte Bardot and Oscar Wilde.

It shuttered its doors in 2008, but after a four-year, multimillion-pound renovation courtesy of David Chipperfield Architects reopened in 2012 as part of Leading Hotels of the World. The good news? It has lost none of its celebrity allure—Kanye West, Rihanna and Serena Williams are just some of the famous faces who’ve been spotted in the five-star, 160-room stay. Located between Mayfair and Soho, the space continues to pay homage to its star-studded past, with additions like the Oscar Wilde Lounge and Ziggy’s cocktail bar (a tribute to David Bowie).

Need more convincing? Here’s everything to know before you check in.

The Princess of Wales would often lunch there in the 1990s, as did Churchill, who was a big fan of the steak and champagne. Elizabeth Taylor and her then-husband Richard Burton, on the other hand, preferred the parties at the Café Royal.

More recently, Kate Moss, Naomi Campbell, Cara Delevingne and Harry Styles have all stopped by, and it’s easy to see why—everything is perfectly curated, from the subtle Diptyque scent wafting through the lobby (which happens to feature a resplendent chandelier so massive, it nearly graces the floor) to the restaurants to the Assouline book–filled library.

The Oscar Wilde Lounge is named after its most famous former patron, who made some not-so-wise decisions there.

The Hotel Café Royal reopened The Grill Room, which dated back to 1865, as the Oscar Wilde Lounge in honor of the famous writer. It’s the very room where Frank Harris famously attempted to get Wilde to drop charges against his lover Alfred Douglas’ father, the ninth Marquess of Queensberry. It didn’t work out, and Wilde eventually ended up in prison.

It isn’t home to this kind of intrigue nowadays (at least not that we know of), but the afternoon tea there is one of the best in London, and Wilde would surely appreciate its unapologetic opulence: gilded walls, velvet and mirrors for days.

David Bowie retired Ziggy Stardust with an epic party at the hotel.

The late music icon retired his alter ego in 1973, celebrating the occasion with a major after-party at the Café Royal attended by the likes of Paul McCartney, Mick Jagger and Lou Reed. The hotel decided to honor Bowie by opening Ziggy’s cocktail bar, a chic spot with walls covered in photographs of the star by Mick Rock. Even the drinks are a nod to him, like the Cat From Japan and Tiger on Vaseline.

Most of the rooms at the Hotel Café Royal (which start at $569) are furnished with contemporary low beds, pink and green leather couches and chairs, and English oak accents. The all-marble bathrooms contain dreamy carved tubs, rainfall showers and the very crucial television-screen-in-mirror.

The pièce de résistance is the $7,760-a-night Dome Penthouse.

The 3,000-square-foot Dome Penthouse occupies the sixth floor of the hotel, and has two furnished terraces overlooking the London cityscape as well as a circular master suite with a giant green marble tub. The three-bedroom suite, which starts at $7,760 a night, also comes with a dedicated butler and concierge who will fulfill any request, whether it be adding a fire pit or rooftop sauna (hear that, Ed Sheeran?), or preparing a glamping setup on the terrace.

Relax with a gold shea butter massage or Poetry in in the Akasha spa.

The holistic underground Akasha spa contains a 60-foot pool, a hammam, a sauna, a hot tub, nine treatment rooms and a Watsu pool, where you can enjoy a Poetry in treatment in which you’ll perform specific movements that will apparently change your perception of shape with zero gravity. Personally, we’d opt for the massage, which uses 23-karat-gold mineral shea butter. 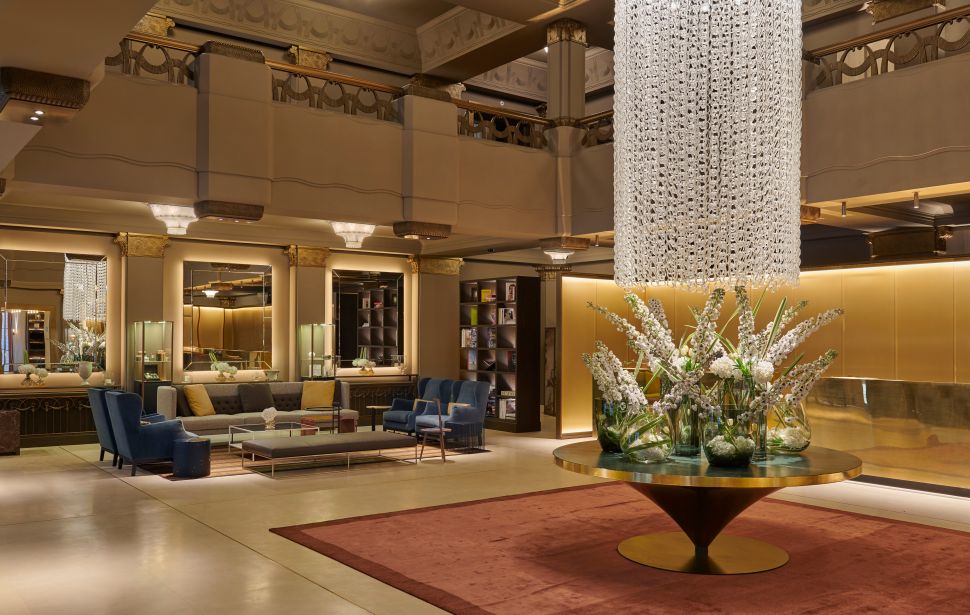