After an eight-year hiatus, India is making its return to the Venice Biennale with a strong, women-centric team and a heavy-hitting selection of modern and contemporary artists. The exhibition is curated by Roobina Karode, the director and chief curator of the private Kiran Nadar Museum of Art—the pavilion’s principal partner. Titled “Our Time for a Future Caring,” the India Pavilion hinges on the ongoing celebrations of “150 years of Gandhi” currently happening in India by spotlighting the rich artistic production that has occurred in response to the figure and philosophies of Mahatma Gandhi from the previous century to the present day. Contributions by the eight selected artists span object-based installations, wearable sculptures, modernist paintings and photos of performances.

“The exhibition uses Gandhi as a focal point, but through a diverse range of artworks, [also] explores wider themes from India’s history and nationhood to broader investigations of agency, freedom and action,” Karode said.

The reinstatement of the India Pavilion at the Biennale is the result of a partnership between private and public sectors at a crucial moment for the country’s developing contemporary art market. Last year, the Confederation of India Industry (CII), a private business association, established the Taskforce on Art and Culture in an attempt to show how “art can benefit the national economy, revitalize cities and support cultural diplomacy,” Tarana Sawhney, a Chairperson of CII’s new taskforce told Observer. In close collaboration, CII and the Indian government formulated a Steering Committee and a Curatorial Committee to realize the exhibition, the latter made up of representatives from CII, the Ministry of Culture and the National Gallery of Modern Art, with the Kiran Nadar Museum of Art at the head of curation.

“The India Pavilion represents a milestone commitment from India’s public and private sectors, who are collaborating to create a platform for international audiences to engage with our high-quality art scene,” Sawhney said. “It was crucial to reinstate our national pavilion and in this way contribute to the establishment of India’s place on the global art scene.”

While the Indian modern market has been on the rise for the past several years (most auction sales are generated by established Modern masters like Francis Newton Souza and S.H. Raza), the country is developing a contemporary art market—in large part due to initiatives like the India Art Fair and the e-commerce platform StoryLTD.

Despite the government’s dramatic demonetization effort at the end of 2016 and the implementation of a new Goods and Services Tax in 2017, a 2019 report published by Art Tactic showed that India has the fastest growing market globally. Sawhney shares that optimism, noting that “one of the many implications of growing wealth in India is that the passion for collecting is growing and spreading outside of the traditional centers in Delhi and Mumbai.” The mounting support, she believes, is paving the way for long-term development and sustainable growth in the market.

One of India’s major cultural institutions is the Kiran Nadar Museum of Art, the country’s first private modern and contemporary art museum. Since 2010, the institution has “focused on bridging the gap between art and the public and encouraging a richer museum-going culture in India,” its founder, Kiran Nadar, said.

For Nadar, India’s return to Venice is a crucial step towards cementing the country’s place within the global contemporary art stage. It took India nearly 116 years to reach Venice for the first time in 2011. Nadar hopes that, following the eight-year interlude, the team behind this year’s pavilion has created a more sustainable model to continue to participate in future editions of the fair. “The Biennale provides a perhaps an unparalleled platform for contemporary art globally, and we have taken the opportunity to present a range of artists working in different mediums and from different backgrounds,” Nadar said.

The eight multigenerational artists on view range from established modernists like M.F. Husain, whose painting, Zamin, 1965, explores questions of nationhood and identity through a conceptual representation Gandhi’s village republics, to the more contemporary Jitish Kallat, whose immersive video installation, Covering Letter, 2012, projects onto fog a letter Gandhi sent to Hitler before the start of WW II.

The exhibition also features sculptures, photographs and accessories from Shakuntala Kulkarni’s two-year project, Of Bodies and Cages (2010-2012). The wearable armor sculptures, which Kulkarni manufactured in close collaboration traditional Indian craftsmen, investigate notions of freedom and non-violence in relation to women in public spaces—particularly poignant in a pavilion almost exclusively organized by women. When I asked Nadar about the country’s presence of women in the arts, she told me that India’s contemporary art scene “is a complex web of socio-economic cues, and, often conflicts of interest.”

Whatever the obstacles in getting to Venice, India’s reinstatement at the Biennale proves a major step towards building a meaningful contemporary art market, not only giving India exposure to the biggest global art event, but giving local buyers confidence in their country’s artists and cultural value.

“Our Time for a Future Caring” will be on view at the Arsenale from May 11 to November 24. 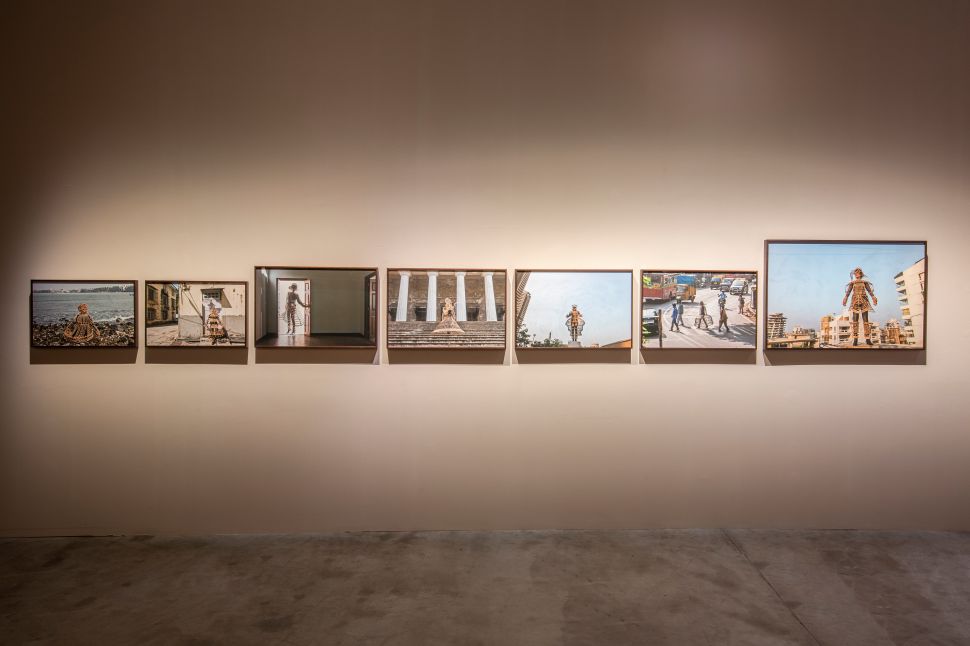