If I recall right, the first time I saw Jeff Koons’ Rabbit, 1986, was on the cover of Artforum’s March 2003 special on the ‘80s, staged in front of a painting by Peter Halley—the two standing like icons of cold-blooded economic demand, hot allure, fetishism, reflectivity, spectacle, speculation and other fairly pat narratives about that era and its art. Last year, the piece popped up in Nathaniel Kahn’s documentary film about the art market, The Price of Everything, in the collection of postwar and Pop art devotee Stefan Edlis. Everyone in that movie comes off as at least a little jaded and narcissistic, including Edlis, and it seemed funny that this thing with a similar reputation should make a cameo as an illustration of that conceit.

An edition of the sculpture—one of three, plus an artist’s proof—from the estate of S.I. Newhouse, the late publisher of Condé Nast, went up for sale at Christie’s yesterday and made headlines, selling for $91.1 million to Mnuchin Gallery (run by the dad of the Treasury Secretary), the highest price ever paid for a work by a living artist. It barely beat out the previous record holder, also from Christie’s, from exactly six months ago: David Hockney’s Portrait of an Artist (Pool with Two Figures), 1972, which sold for $90.3 million.

Art market commentator Josh Baer, in his Baer Faxt newsletter, called the sale “a huge win for Christie’s,” which he described as having “a seemingly insatiable global appetite for art and especially strong bidding at the highest levels.” Baer also noted that a piece by Robert Rauschenberg in that sale, Buffalo II, 1964, not nearly as touted but estimated in the same price range, sold for nearly the same amount. (Incidentally, Rauschenberg also makes an appearance in The Price of Everything, with a very negative reaction to the inauguration of high-priced contemporary art auctions.)

All this seems a little strange. Koons’ sculpture is exemplary of his oeuvre in a lot of ways. It’s technically amazing: an exacting stainless steel reproduction of a Mylar balloon in the shape of a cartoon bunny with a carrot in hand. It looks like a balloon, apparently lighter than air, but in fact extremely heavy. It’s about three-and-a-half feet tall, with a highly polished mirror surface. It calls back to art historical predecessors in a farcical but knowing jape, such as Andy Warhol’s Silver Clouds or Lucas Samaras’ Mirrored Room (both 1966). It’s suffused with bathetic saccharine—like Sputnik, but cute.

But the point is that first, Koons’ legacy is far more controversial and subject to jeering than either Rauschenberg or Hockney. Hyperallergic, for April Fools’ Day this year, ran an acidic article describing Koons as retiring from making art and much of the art world rejoicing. His major 2014 retrospective at the Whitney Museum (which also traveled to the Centre Pompidou and Guggenheim Bilbao) was kind of a zoo, panned by some critics and lauded by others. Two vandals—one in August  of that year and the other on the show’s final day in October—put their critiques on the walls right there at the museum, one in blood and the other with spray paint.

The sale looks like incontrovertible evidence the market doesn’t care one whit about this kind of critical appraisal of the showman and former stockbroker. He is consistently one of the highest-priced artists on the market. And growing? Koons’ previous record-high sale was slightly less than the low-end estimate for Rabbit.

Moreover, Christie’s is big into extravagant sales: In 2013, it hyped, with a high-profile media campaign, a sale that included Francis Bacon’s Three Studies of Lucian Freud, 1969, which became the most expensive artwork ever sold at auction. That record was then beaten twice in 2015, by Christie’s. In 2017, that record was beaten by Christie’s again, with the sale of a painting very dubiously attributed to Leonardo Da Vinci, called Salvator Mundi, ca. 1500. Sotheby’s, too, Christie’s greatest rival, also does this, but are met with less enthusiasm. A Monet painting sold there on Tuesday broke the record for Impressionist and Modern auctions, going for $110.7 million. This received a lackluster response, epitomized by the Artnet headline: “A Record-Shattering $111 Million Monet Powers an Otherwise Staid $350 Million Impressionist and Modern Sale at Sotheby’s.” Such are the benchmarks and expectations of the auction market.

Christie’s is raking in cash hand over fist. They are flashy, and get results, I guess not unlike Koons himself. And who better than he? His artwork is a testament to the perceived financial and art market excess of the 1980s, now on sale during the even more excessive financial and art markets of the post-2008 era. As Evan Beard, national art services executive at Bank of America Private Bank told Barron’s, the sky is “the limit for art-historical icons in our stratified global economy.” The journey of artworks in the upper strata is a spiral: Koons understands wealth and makes objects for the wealthy, who are in need of expensive investments and trophies. Like a prize at a carnival, someone won a bunny-shaped balloon. It will likely sell for more next time. Something will; the market remains hungry—for art and spectacle in equal measure. 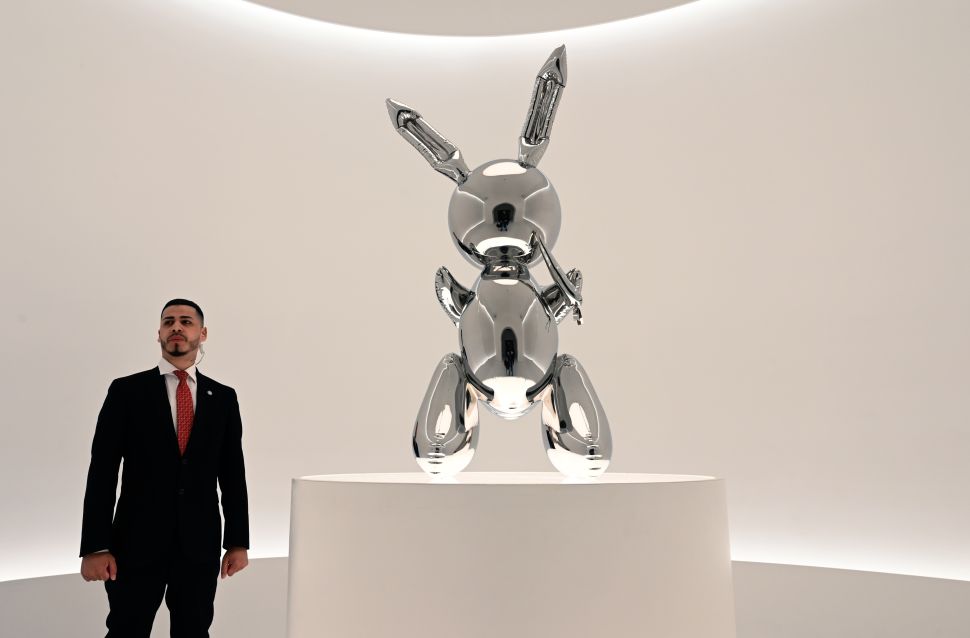