As former Vice President Joe Biden builds up a commanding lead, his opponents have tried to paint him as a moderate, too centrist to win the Democratic nomination. But a review of the evidence, in the form of Biden’s voting record, shows there is every indication that Barack Obama’s second-in-command is clearly “progressive enough.”

As Biden toyed with his decision to enter the race, many other candidates and pundits have decided to list the former Delaware senator as a “moderate” without a skeptical look at the evidence.

Simply Assuming Biden Is a Moderate

“Why Joe Biden (or any moderate) cannot be nominated,” is the headline of an op-ed by J.T. Young published by The Hill. Young goes on to write:

Young, the former Office of Management and Budget (OMB) communications director for the George W. Bush administration, just assumes Biden is moderate and takes an uncritical eye when making such an evaluation. Young is not alone, of course.

In fact, that’s what everyone does.

Mara Liasson with NPR recently asked whether Joe Biden is too centrist or not. She pointed to a Gallup poll from December of 2018 saying that Democrats are more likely to prefer a moderate, by several percentage points. But she still merely assumes Biden is a moderate, and then asks whether such a centrist can win, without really questioning the ex-vice president’s actual record to see if he is indeed a moderate.

Redstate.com took the mainstream media to task for claiming that Biden is too moderate to win, but considers the former Delaware senator to be moderate because of “identity politics.” We are led to believe he’s moderate, ostensibly because of his race and gender more than anything. The article writer Brandon Morse contrasts Biden with Kamala Harris, who is African American and a woman, and therefore assumed to be radical (without offering evidence of this).

Writing for Salon, Norman Solomon asked whether Biden is a “middle-of-the-road moderate” or a “corporate tool with a dubious record.” He went on to note that Biden associates with bankers and supported the Iraq war, providing some quotes, media comments and testimony from the Senate floor to back up his claims. While Solomon’s piece gets closer to the true Biden, it never provides any systematic analysis of how Biden has acted.

To determine how Biden voted in the U.S. Senate in Delaware, I used the American Conservative Union (ACU) ratings of his lifelong voting record, and found that his ACU rating comes out to 12.67, meaning Biden only votes with conservatives 12.67 percent of the time.

For the sake of comparison, Florida Senator Bill Nelson, voted out by Rick Scott voters for being too liberal had an ACU voting record of 28.95. Ditto former Sen. Joe Donnelly of Indiana, scoring a 23.86 on the American Conservative Union scale.

In the House, Hawaii’s Democratic Rep. Tulsi Gabbard’s ACU voting record is 7.36, while Rep. Seth Moulton (D-Mass.) has a 3.85 ACU score. Beto O’Rourke is a Biden-esque 8.08, according to the American Conservative Union. Before he became Washington’s governor, former Rep. Jay Inslee had a lifetime ACU voting record of an 8 in 2011.

There’s also New Jersey Senator Cory Booker, sporting a conservative rating of only 5.1. Colorado Senator Michael Bennet is only a little higher, at 5.45 in the American Conservative Union ratings, while the former Alaska Senator Mike Gravel actually has the highest ACU rating of any Democrat currently in the race at 16.

Kamala Harris is more liberal (ACU voting score of 4.55), pretty close to Senator Kirsten Gillibrand of New York, with an ACU voting record of 4.41. Minnesota Senator Amy Klobuchar has a 4.70 lifetime score, according to the ACU. Elizabeth Warren, the Massachusetts senator, came in at 4.16 for her lifetime, with a 2018 score of 9 (very near Biden). Vermont Senator Bernie Sanders, ironically, is more conservative than any of these senators, with an ACU score of 6.78. 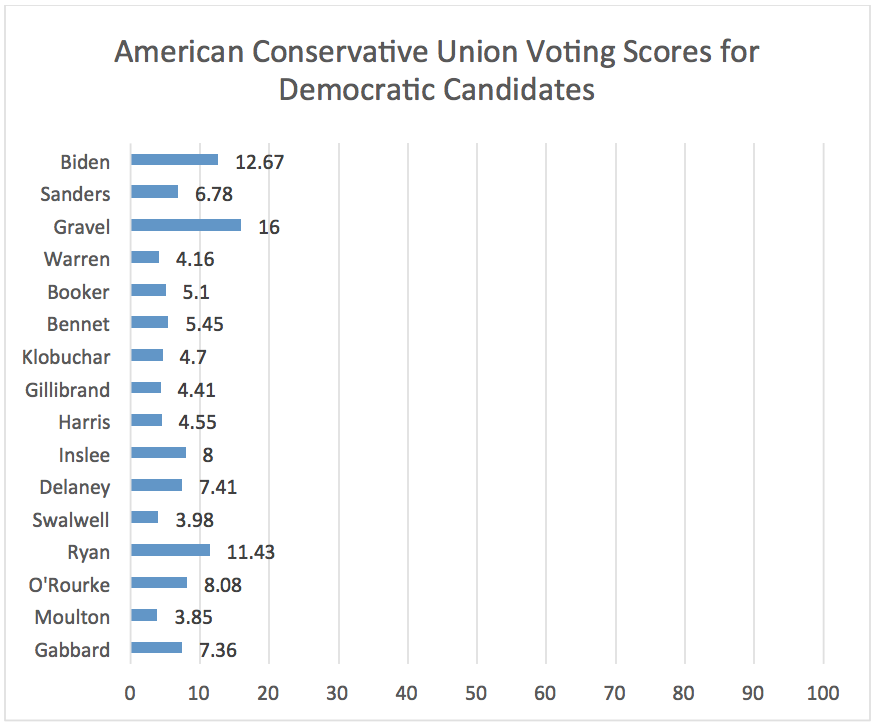 Rather than paint a picture of Biden as a more centrist character, all of these scores reveals that there’s not much distance between Democrats on this issue, and it’s fairly left-of-center.

And in case you are wondering, it’s not like Biden was some progressive firebrand in the 1970s, who somehow morphed into something more moderate as he aged. His record during his last two years of voting (2007 and 2008) were perfect zero scores, and it’s kind of tough to be more progressive than that.

The Reason This Matters

By portraying Biden as a moderate, his opponents are actually helping his candidacy. This somewhat false narrative inflates his centrist credentials, which might otherwise go to a different politician. Meanwhile, the rest of the Democrats are crowding the progressive sphere, ceding the path for the nomination to Biden.

This also helps Biden in the fall of 2020. As President Donald Trump becomes increasingly erratic, and extreme in position, Democrats will be able to point to Biden as “the centrist” and win the largest share of voters, as Anthony Downs might have told you (he thinks voters are normally distributed, with many in the middle). Such arguments, designed to sink Biden, are actually empowering him, putting him one step closer to the presidency. 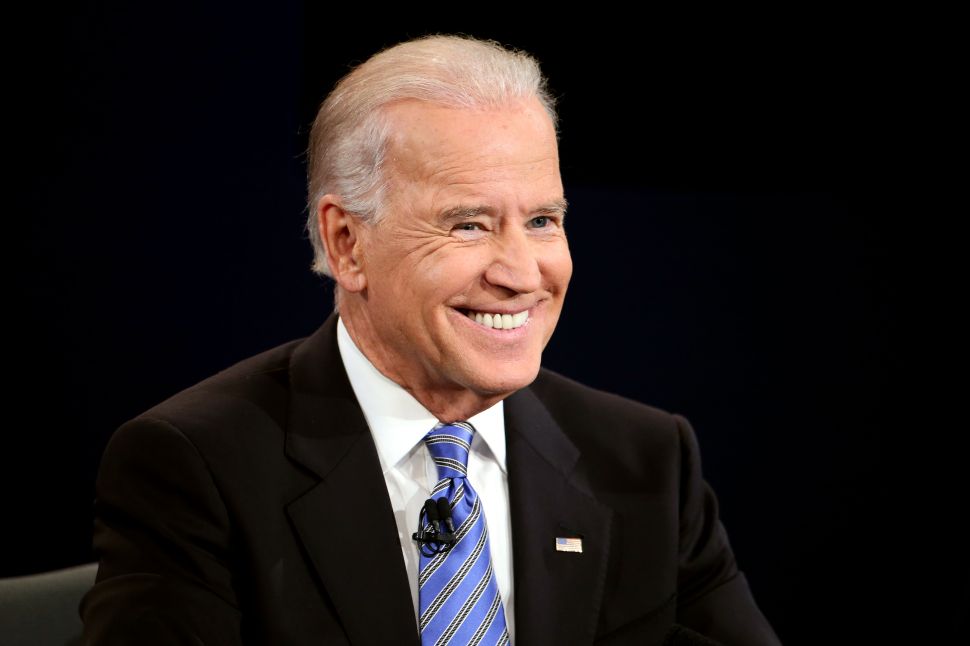