National security hawk John Bolton may finally have his opening to overthrow the Ayatollah.

As the Pentagon explores the possibility of deploying 120,000 troops to Iran, with President Donald Trump threatening the mullahs’ regime over Twitter, Bolton has a unique opportunity to imprint his own vision on the region. Neither Bolton, nor any Trump official, however, has discussed what an alternative to Ali Khamenei’s regime would look like—leaving a giant question mark over whether a president who campaigned on a non-interventionist platform intends to wage his own variant of the Iraq War.

Who Does Bolton Want to Replace the Mullahs?

Over the past decade, Bolton has endorsed regime change in Tehran at the hands of the People’s Mujahedeen of Iran (MEK).

Founded in 1965 as an opposition movement to the Pahlavi monarchy comprised mostly of younger members of Iran’s traditional middle-class intelligentsia, the group worked alongside Iran’s former Supreme leader Ruhollah Khomeini to overthrow the Shah, who the United States supported and later provided asylum to after his overthrow. The MEK’s intellectual foundation is rooted in a secular interpretation of Islam mixed with Marxism, and many of the movement’s founding members were opposed to United States interventionism—Massoud Rajavi, whose wife Maryam Rajavi now leads the MEK, once called U.S. imperialism the “main threat” facing the people of Iran. The group, both in its founding and up to the present day, advocates for violence—a summit hosted last fall featured blown up poster-boards emblazoned with the words “Death to Khamenei.”

After the group fell out of favor with Khomeini’s clerical leadership, MEK members organized demonstrations against the Islamic Republic. At the height of the group’s power, particularly in June 1981, the MEK could assemble crowds of tens of thousands of protestors, even 500,000, according to Iranian historian Ervand Abrahamian. As Khomeini executed and imprisoned MEK activists, the group’s leaders fled to Paris and installed the NCRI—an international lobbying organization which has courted support from Western powers—though the group was later expelled from France after the French government attempted unsuccessfully to curry favor with Tehran.

“The policy of the NCRI, since its inception in 1981, has been this regime needs to change,” Ali Safavi, a member of the NCRI’s Foreign Affairs Committee, told Observer. “The West has always weighed in on the side of the regime and to the detriment of the Iranian people. And it is time this imbalance is rectified.”

Following exile from Iran and Paris, the MEK relocated to Iraq and provided Saddam Hussein’s regime support against Iran. By MEK’s own estimate, it killed over 50,000 Iranian troops—a decision seen as a betrayal by many Iranians, which Tehran continues to weaponize as a narrative against the group.

MEK’s relationship with the U.S. government is complicated, mostly due to a string of bombings which resulted in the death of six Americans during the 1970s. The State Department in 1992 described the MEK as inciting a “swath of terror” in its designation of the group as a terrorist organization, prompting the NCRI to mount a lobbying campaign—according to the organization, the bombings were the work of a breakaway Marxist faction, though some State Department directors refute this narrative and note a line of succession between the attacks and current MEK leadership. In 2005, a Human Rights Watch report found the MEK allegedly committed “physical and psychological abuses” to its members.

Only in 2012 did the State Department delist the MEK as a terrorist group, faced with the increasing likelihood that the Iraqi government would slaughter them in the absence of U.S. leadership in the region.

“I supported the delisting for the simple reason that it was a humanitarian necessity. It was humanitarian to prevent them from getting slaughtered, and not because they had become a peaceful group or the United States believed they were completely without a nefarious design. Would the MEK have been delisted absent the situation in Iraq? I don’t [think] there’s any question they would not have been,” Daniel Benjamin, the State Department’s counterterrorism director at the time who worked on the delisting effort, told Observer. “They have often mischaracterized the delisting to show that it was all a big mistake and that Washington came to its senses and saw them as staunch supporters of a free Iran.”

“I think Daniel Benjamin has a lot to answer for because the delay to delist the MEK gave [former Iraqi Prime Minister Nouri al-Maliki] free reign to slaughter the MEK. From 2009 until the MEK was delisted, 140 MEK members were killed in Iraq,” countered Safavi.

Currently the MEK is headquartered in Albania, where it has been dogged by allegations of mistreating its members. According to the MEK’s vision, the Islamic Republic will inevitably collapse under mass unpopularity, prompting MEK members and the NCRI to establish the Democratic Republic of Iran.

It’s “the NCRI that would establish an interim government, and they have a plan with regard to timelines for a general election,” former President Barack Obama’s national security advisor General James Jones, who now speaks at the NCRI’s events, told Observer in a statement.

Many lawmakers and policy architects have promoted MEK’s interests in Washington.

But MEK’s biggest supporters are tasked with making foreign policy in the White House. Bolton has spoken at MEK events, touting regime change for over a decade, and as recently as 2017 promised the mullahs’ regime would collapse “before 2019.”

“There is a viable opposition to the rule of the ayatollahs,” Bolton told an MEK gathering in Paris at the time. “And that opposition is centered in this room today.”

The national security hawk’s actions over the past year indicate he is looking for a fight with Tehran. Last week, Bolton ordered the Pentagon to draw up military preparations for the possible deployment of 120,000 to the Middle East should Iran attack American forces or ramp up production on its nuclear weapons, according to a New York Times report. A video uploaded to the White House’s Twitter page in February featured Bolton accusing Tehran of “terrorizing [its] own people.”

A message to the Ayatollah of Iran: "For all your boasts, for all your threats to the life of the American President, YOU are responsible for terrorizing your own people." #40YearsofFailure pic.twitter.com/gpCL1FeLis

“You could really say that since the Islamic Revolution this is certainly the hot watermark of MEK’s influence,” Benjamin told Observer. “My guess is that they’re feeling pretty good about all the investments they’ve made to build their influence in Washington. Bolton has continued to make video messages that echo what he was saying before to MEK groups.”

Another member of President Donald Trump’s inner-circle who has spoken at MEK events at home and abroad includes Rudy Giuliani—who last fall told Iranian dissidents in Times Square that regime change is “going to happen.” When asked by Observer about the group’s controversial history said to include violence against Americans, he echoed the group’s narrative that an unaffiliated group of Marxist dissidents were behind the attacks.

“What you’re referring to happened over 30 years ago,” Giuliani told Observer during a press conference after his speech. “It happened during the overthrow of the Shah. It was a group of people that were not connected to the MEK. This particular organization has been extraordinarily friendly to the United States, embraced by the United States military.”

A spokesperson for Bolton at the National Security Council did not return Observer’s request for comment on whether he saw the NCRI’s vision as a suitable replacement for Tehran’s regime.

As the Trump administration escalates its rhetoric toward Iran and hints at possible military action in the region, the NCRI has seized on the conversation surrounding regime change to promote itself as an alternative to the Ayatollah.

“Decades of human rights abuses and domestic suppression need to be dealt with now,” reads a blog post uploaded to the organization’s website last week. “The regime is in the most vulnerable place it has ever been and this is when it could potentially be dangerous so the policy of exerting the maximum pressure should go on and the international community should more than ever listen to the only viable alternative which is the National Council of Resistance of Iran (NCRI) with its president elect Maryam Rajavi.”

Earlier in May, a former NCRI lobbyist launched an advertising campaign on Facebook to promote a Washington Times article about an NCRI event, which quoted the organization’s deputy director of U.S. operations, according to The Daily Beast.

The organization has been careful not to advocate explicitly for a U.S. military invasion and has walked a fine line in promoting regime change, while recognizing Trump’s aversion to interventionism. Representatives for the NCRI also reject the narrative that the U.S. is aggravating Iran and point to the regime’s sponsorship of state terrorism throughout Europe. One policy they are in favor of is a continued push of the White House’s maximum pressure campaign.

“The regime is having a lot of problems domestically. It is also isolated regionally and internationally,” Safavi told Observer. “The maximum pressure policy hasn’t yet run its complete course. There are other areas where the regime should be sanctioned, in particular the petrochemical and gas industry. Another step that we see is necessary is to designate the Ministry of Intelligence as a voluntary terrorist organization because it qualifies as such.”

“I’d be surprised if they want to oppose Trump in any vocal way,” added Benjamin. “That would only diminish their fanning.”

What Will Happen If the MEK Rises to Power?

The NCRI’s ten-point plan for Iran outlines a future free of nuclear weapons, Sharia law and the death penalty. The organization promotes universal suffrage, an independent judiciary and free market economics. Gen. Jones has praised the points as “Jeffersonian principles.”

Although the NCRI and MEK anticipate droves of Iranian activists flooding Tehran to support them should Khamenei’s regime fall—all cheering “Iran is Ravaji, Ravaji is Iran”—the group’s possible ascendance to power is likely to be met with fierce resistance from many Iranians who still see the group as traitorous given its support for Saddam Hussein.

“Any effort by the MEK to reinsert itself back into politics in Tehran would be met with a pretty violent reaction,” continued Benjamin. “We’re talking about an extremely marginal group with no support in Iran. It has some support in the diaspora, and there have been plenty of lawmakers who have carried their banner for them, but in terms of pushing for a regime change policy, we haven’t been this close since the invasion of Iraq… Absent an occupation, there is little chance of the government falling. Unless the U.S. manages a regime change, the MEK doesn’t have many prospects in Iran, and if there were regime change, the U.S. would have to put the MEK in the driver’s seat to have any role.”

With Bolton and Giuliani promoting the MEK, and other hardliners like State Secretary Mike Pompeo endorsing regime change, the group is the closest its ever been to claiming Tehran from the mullahs.

“They’ve got their man in the White House pushing dangerously hard against the opposition of his boss,” said Benjamin. “Their cult-like behavior, the abusive treatment of their members, their absolute refusal to acknowledge their past, all of those things cast a big shadow on the group.” 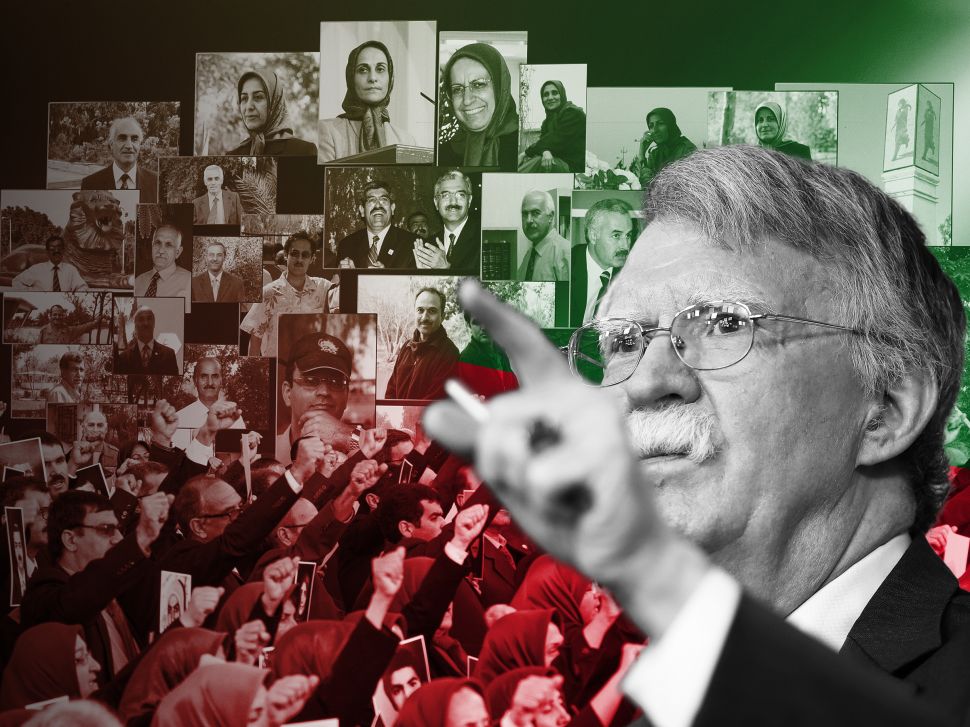