In the last decade, crowdfunding technology has revolutionized the arts community by taking some of the decision-making over who gets funded out of private board meetings and into the hands of the hoi polloi. Where grant competitions once limited the range of artists given access to platforms and resources, Kickstarter Arts has helped raise more than $100 million since 2009 to diversify the realm of storytelling in visual arts, globally. And this week, as the site celebrates 10 years in existence, evidence is only mounting that their presence in the art world will continue to gain steam.

Public arts non-profit Creative Time launched a project this week that speaks to the subject of democratization that Kickstarter could be called an example of. Called Privilege of Escape, it is a collaboration with artist Risa Puno, who will create an interactive escape room challenging issues surrounding social dynamics. “Traditional funding models continue to support a similar group of artists year after year, but Kickstarter allows for creative independence. If you have an idea, mobilize your community and you can make it happen,” Patton Hindle,  Kickstarter’s director of arts, told Observer. “The platform invites diversity in the types of projects…and as we say on staff, “fuck the monoculture.”

For groups who’ve successfully relied on the platform and have even returned to it, like Creative Time, art and action are inherently cinched. Crowdfunding, after all, teaches communities how to engage meaningfully—a mentality that aligns with civic participation. Looking back to celebrate their 10 year anniversary, these five visual art projects have all made history thanks to Kickstarter and the everyday people of the internet like you.

Created by the artist-run political non-profit called For Freedoms, this project was the largest creative collaboration in U.S. history. It ran from September to December 2018, with the aim of bringing a politically charged, artist-designed billboard to every U.S. state ahead of the midterm elections. With 52 simultaneous Kickstarter campaigns in action, it attracted over 2,000 backers. Taking inspiration from Norman Rockwell’s paintings of the four freedoms Franklin D. Roosevelt described during his State of the Union Address in 1941, the project led to a national conversation on civic issues and values as well as freedom of speech.

Shepard Fairey, the visual artist responsible for the iconic HOPE poster of Barack Obama that appeared in 2008, partnered with The Amplifier Foundation to implement a series of images surrounding the date of the 2016 presidential inauguration. Called We the People, the project consisted of images rejecting the hatred, fear and open racism that stirred conversations during the 2016 presidential campaign. Because of restrictions on banners and signage at the inauguration, protestors and activists found a different way to get the images out there, taking out full-page ads in the Washington Post and New York Times. They were also ubiquitous on placards during the ensuing Women’s March.

Teaming up with the gallery What Pipeline in Detroit, Chicago-based conceptual artist Pope.L created an installation, performance and artistic intervention that called attention to the Flint crisis using funds from his Kickstarter campaign. , contaminated with lead, E.coli and listeria, was purchased from the homes of Flint residents to be bottled and sold at the gallery as part of a performance installation educating audiences about the ongoing crisis. Proceeds from the exhibition were donated to the United Way of Genessee County and Hydrate Detroit to help mitigate the crisis and advocate for affordable laws in both Flint and Detroit.

Revitalizing an abandoned hydrotherapy pool in Swope Park and replacing caution signs and fences with flowers and benches, Called Up was an installation in Kansas City, Missouri, by Jamaican-born mixed media artist Ebony G. Patterson. Mounted during the inaugural public art event Open Spaces, Patterson educated audiences about the man named Harry M. Gilkey who once used the pool to work with handicapped children during the ‘50s and ‘60s. The piece was donated to the park’s community indefinitely as a place for reflection, honoring the children and residents who once used the site. 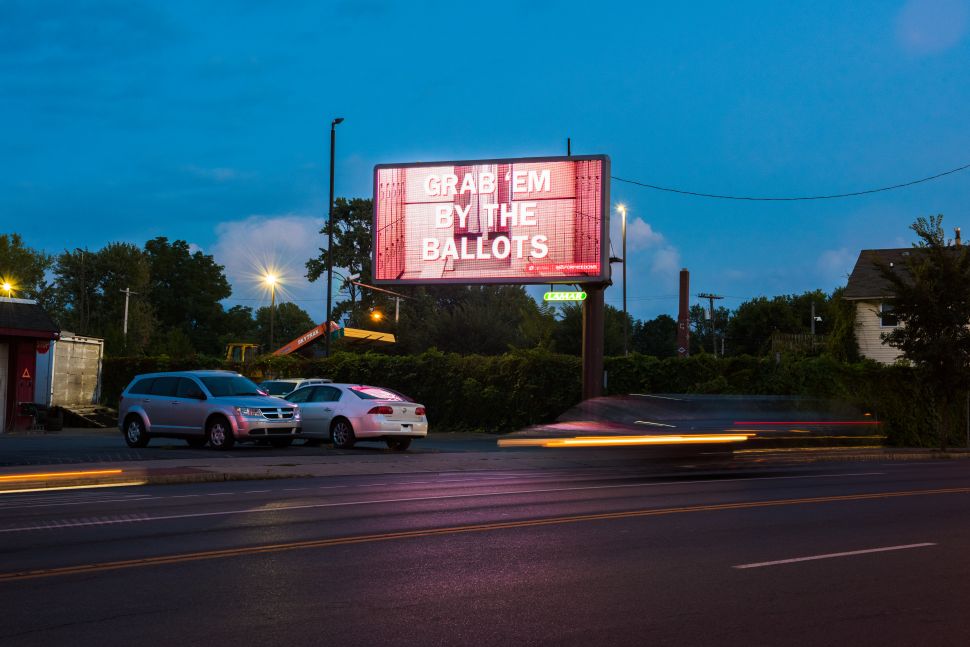