Knock Down the House begins with Alexandria Ocasio-Cortez, then a long shot candidate to unseat incumbent Representative Joe Crowley for New York’s 14th congressional district, in a vulnerable position. She is putting on makeup in a hotel bathroom before heading to a rally, wondering out loud about how fraught the ritual of presentation is for women candidates in comparison to their male counterparts. It’s both a practical concern—how much concealer is too much?—and an existential one.

“How do you prepare yourself for something you don’t know is coming?” she asks no one in particular.

Unlike Ocasio-Cortez, we all know what’s coming. AOC, as she is now known the world over, has—since the time of innocence depicted in Rachel Lears’ new Netflix documentary—won her election and gone on to become one of the most significant figures in U.S. politics and culture. In fact, she has become her own cottage industry.

After all, criticizing the 29-year-old first-time congressperson has become the most important talking point for the pundits at Fox News after supporting—and setting—the agenda for the Trump administration. Meanwhile, for media watchers and political junkies on all sides, witnessing her deftly fillet the conservative fixation on every aspect of her (“that jacket and coat doesn’t look like a girl who struggles”) has become one of the most entertaining parts of checking the morning Twitter feed.

So seeing a much less seasoned Ocasio-Cortez in a fight against a Bronx democratic establishment that hardly acknowledged her existence until they were phoning her on election night not only illuminates her remarkable and lightening quick evolution, but it also puts her struggle in proper context.

If nothing else, Knock Down the House is about context. Rather than a singular achievement, the film shows that Ocasio-Cortez’s election was just one part of a much larger movement jolted to life by the results of the 2016 presidential election and spearheaded by grassroots organizations like Brand New Congress.

While the grassroots may have been inspired by the insurgent candidacy of Senator Bernie Sanders (while the B word is hardly ever uttered, you see his bumper sticker on the laptops of volunteers), women—most of them with next to no political experience—were largely the reason for the Democrats’ success. But unlike Ocasio-Cortez, the other candidates featured in Knock Down the House did not become subjects of national obsession, or even poll that well in their home states. If not for Lears’ dogged dedication to telling their story, many of us wouldn’t know who they were.

They include Paula Jean Swearengin, an environmental activist in West Virginia fighting the coal mining interests that were not only funding her opponent, Senator Joe Manchin, but also helped poison her state’s natural resources and sicken members of her family. Cori Bush, running in the St. Louis congressional district that includes Ferguson, witnessed the effects of gun violence up close in her job as a registered nurse. Amy Vilela became a staunch advocate for universal health care after the death of her daughter, who died in part because she did not have health insurance and was denied treatment.

As the primary results pour in, Knock Down the House becomes the electoral equivalent of the Death Star raid in Star Wars. Each of these rebel fighters bite the dust as they valiantly storm the empire, only to have one miraculously make it through and hit the target. The film concludes with this modern Skywalker zipping around on a Lime scooter outside of her new workplace in Washington D.C. and reminiscing about her father, who passed a way while she was in college. (Loss is one of the film’s major themes.)

While it was a little disappointing to see the film relegate the other candidates to backup singers to Representative Ocasio-Cortez’s leading lady, that doesn’t make their contributions to the movement that elected her any less significant. Nor does it dull the emotional impact of her remarkable achievement.

Along with the daily concerns of the residents of New York’s 14th and the hopes of a generation disillusioned by the corporatization of American politics, Ocasio-Cortez is shouldering the struggles and aspirations of those women too. As for how far she can go with that heavy a load, only time will tell. 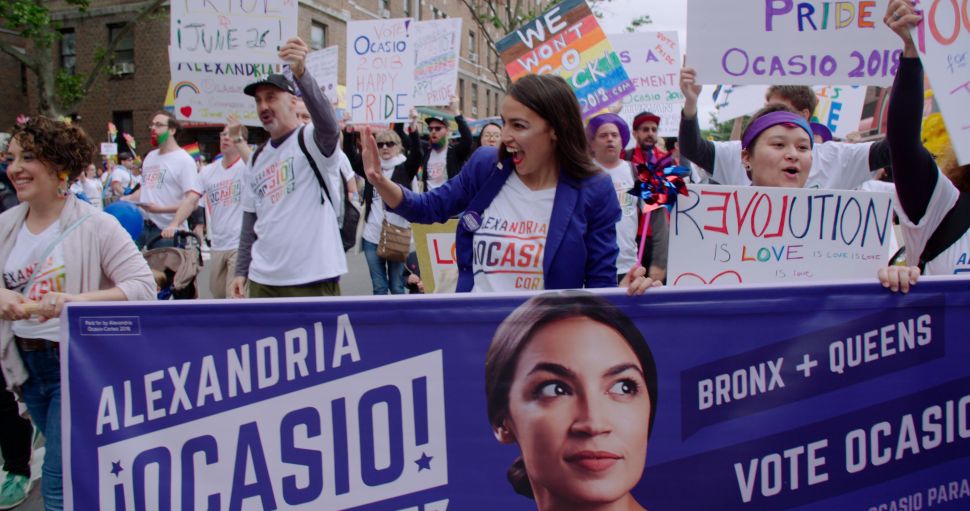