Although he has made no official announcement, Kroger CEO Rodney McMullen is sure to retire within the next 12 to 24 months. Like many companies, Kroger has a policy of promoting from within whenever possible. In industries where competition is stable with little disruption, promoting from within can be justified. In the case of Kroger and its next CEO, I believe it is critical for the Board of Directors to insist that the next CEO come from outside of the company. The question is from where?

Although the U.S. has many qualified grocery executives, most executives were caught flat-footed when Amazon announced it was acquiring Whole Foods. (I recommended that Amazon should acquire Whole Foods in this 2013 paper.) Since the acquisition, what I have witnessed is that executives continue to react with few leading. The exceptions are executives at Walmart and Aldi who continue to design and implement strategies that have proven very effective in growing market share and revenue. Obviously, the next CEO of Kroger should come from Walmart or Aldi, correct? No.

Another company that has gained a lot of press is Ocado. I recommended that Kroger enter into an agreement with Ocado, and indeed, Kroger and Ocado are actively working together. Does this mean that I believe the next CEO of Kroger should come from Ocado? No. I believe the most qualified individual to become the next CEO of Kroger doesn’t work for any grocery retailer in the U.S. In fact, the person doesn’t even live in the U.S. The person Kroger should choose to become its next CEO is Sergei Goncharov, general director of the largest grocery retailer in the world by store count, Pyaterochka.

X5 Retail Group is a leading Russian food retailer. The company operates several retail formats: proximity stores under the Pyaterochka brand, supermarkets under the Perekrestok brand and hypermarkets under the Karusel brand. (Full Disclosure: I recently traveled to Russia to support Pyaterochka on a consulting engagement. Pyaterochka is an exceptional grocery retailer with a highly skilled team of executives; many of whom are the best I’ve ever worked with.)

X5 Retail Group has announced that it has opened its 15,000th store. The new launch is a Pyaterochka outlet in Zelenograd featuring a new store design. The move is a part of the retail chain’s external and internal transformation plan, which is aimed at improving the customer experience and offering better services.

Pyaterochka general director, Sergei Goncharov, said, “Our aim is to make qualitative improvements to the shopping experience and earn our customers’ trust, making Pyaterochka a more caring, practical and convenient store that is recognized for its fresh assortment.” The new features include updated brand colors and easy navigation for improved customer experiences. The fruit and vegetables area have been equipped with modern spotlighting to emphasize the freshness of goods, according to a press release.

The store is also testing a new in-house bakery to extend its range of bread and pastries. Bread and confectionery products are displayed on shelves with glass partitions that are significantly better at keeping products fresh, the company said. The store has a sales area of over 600-square-meters and offers around 6,500 items, including locally sourced products.

Most grocery analysts rank Great Britain and the U.S. at the top of the list in terms of grocery retailing. I don’t dispute the rankings, but I strongly suggest analysts make the effort to travel to Russia (especially Moscow) and assess Russia’s growing and dynamic grocery options. Anna Petukhova, who runs her own business in Moscow and who also works as a business consultant, said it best when it comes to Pyaterochka and Russia’s grocery industry:

Moscow is a cosmopolitan city of nearly 13,000,000 people from all over the world. Many people in Moscow are looking for exceptional quality in the groceries they buy with no concern about cost. New grocery retailers are entering the market and are introducing unique formats that quickly attract customers. Although a more established brand, Pyaterochka has done an excellent job of being able to compete and beat other retailers. Russians trust Pyaterochka, and we expect to see great things continue to come from the company. This is why the X5 Retail Group is the largest retailer in Russia.

I can state with no hesitation that based on my research and personal assessment of grocery retailing in Moscow and throughout Russia, the X5 Retail Group has done an exceptional job of recognizing changing consumer trends and taking steps to meet customer demand. In discussions with retail analysts inside and outside of Russia, I have made the argument that Amazon would be wise to assess acquiring X5 Retail Group. If such an acquisition occurred, Amazon would become the largest grocery retailer in Russia. In addition, Amazon would be able to scale the different retail formats of the X5 Retail Group across Europe.

Make no mistake, the X5 Retail Group doesn’t have to be acquired in order to expand outside of Russia. The company offers incredible retail formats and value. It is conceivable that within 10 years, X5 Retail Group may operate 30,000 or more stores. For a frame of reference, Kroger operates 2,782 stores.

Kroger Is Facing a Difficult Future

I have written multiple articles about Kroger with most of the articles pointing out the increased competition Kroger is facing. I am a former consultant to Kroger, I am a former Amazon executive, and I have provided consulting to some of the largest grocery retailers globally. I wrote the following in an article titled Killing Kroger:

Based on my analysis as a consultant, Kroger is facing significant competitive pressures that threaten Kroger’s ability to survive. Sound drastic? It isn’t. Kroger isn’t just in a dogfight; Kroger is in a fight against a three-headed dog named Walmart, Amazon and Aldi intent on ripping Kroger’s customers and market share away.

Based on my experience, Kroger will make a catastrophic mistake if it promotes an executive from within to become its next CEO. What Kroger requires is an executive that will bring a fresh pair of eyes and who has the experience and backbone to take Kroger to the next level. Kroger has made some very poor decisions over the last two years that will need to be addressed. For example, even though I recommended Kroger should enter into an agreement with Ocado, I also made the argument in 2017 that Kroger should acquire Takeoff and CommonSense Robotics, the leaders in micro-fulfillment for groceries. Kroger chose to enter into an agreement with Ocado only. Big mistake. Micro-fulfillment is growing in popularity, and in most cases, it offers retailers a better business model than the services offered by Ocado.

There are two grocery executives that I believe to be the best in the business: Greg Foran of Walmart, and Sergei Goncharov of Pyaterochka. Goncharov’s exceptional global experience and take-no-prisoners style of management, whereby he questions the status quo and insists on the highest levels of operational execution to give customers an exceptional experience, is exactly the type of person Kroger should hire as its next CEO. Sad to say but Kroger operates more like a social club at the executive level as most executives have worked together for the last 20, 30 and in some cases 40 years. I’ve witnessed CEO selections at similar companies done with one goal in mind: choose someone who will maintain the process and culture. If Kroger selects an insider as its next CEO, the message to Wall Street and retail analysts will be clear—Kroger’s best days are behind the company.

Kroger can and should pursue Goncharov, and odds are high that Goncharov would accept a role as Kroger’s CEO. If Goncharov is not hired by Kroger, I strongly recommend Amazon hire Goncharov to be the next CEO of Whole Foods with responsibility for Amazon’s entire grocery strategy and operations. 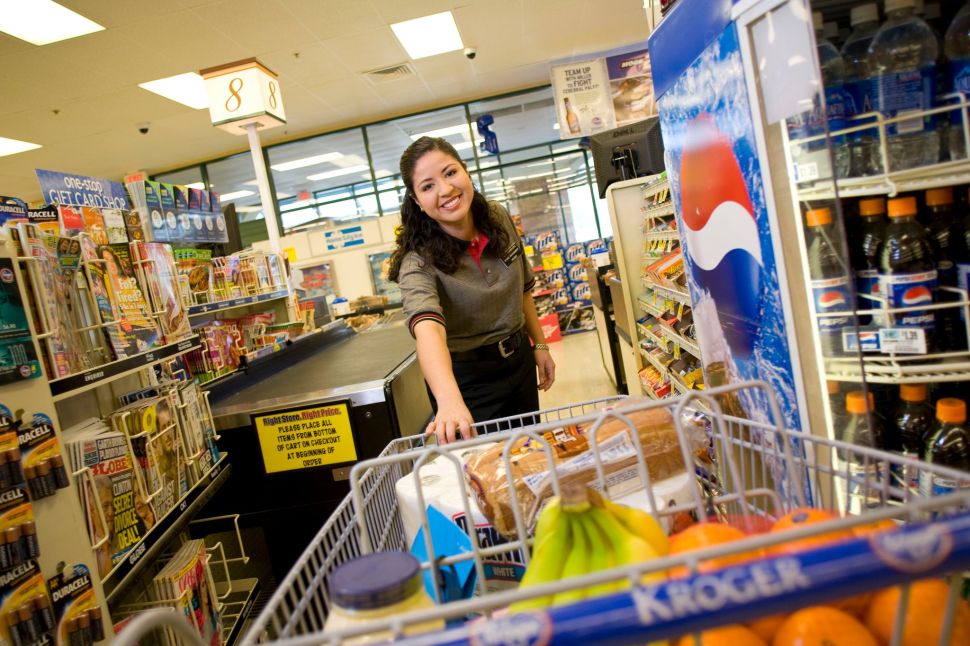