Applying for a U.S. work visa is a tedious, time consuming, if not daunting, process for foreign-born entrepreneurs. There are baseline requirements that each applicant must meet to qualify for a work visa; however, certain sections can be subjectively interpreted by U.S. Citizenship and Immigration Services (USCIS)—mystifying and maddening to applicants.

Sara Itucas and former immigration attorney Todd Heine are the co-founders of Legalplad, based in Seattle, Washington. They launched Legalpad in January 2018 to help potential immigrant entrepreneurs automate the work visa application process. In fact, its website boldly declares a visa application can be submitted in 60 minutes using the company’s automated system. Legalpad specialize in the “extraordinary ability or achievement” O-1 and EB-1 visas that many foreign-born tech startup founders use.

Lagalpad has raised more than $2 million in seed funding from 8VC among other venture capital firms like One Way Ventures, which funds immigrant founded startups. Itucas and Heine attended the accelerator Techstars last year, and Legalpad is now a nine-person team.

Itucas and Heine recently visited New York City to give an O-1 visa information session for startup founders at SOSV’s tech accelerator in Manhattan. On a freakishly cold and raw spring day, Itucas sipped her espresso at a nearby café and explained why she left her safe corporate job to launch Legalpad and whether or not being an immigrant from the Philippines influences her business decisions.

What drew you to launch a startup that helps immigrant entrepreneurs with their visa application process?
I’m an immigrant myself. I came to this country from the Philippines because my mother thought it would be a better life for me. I want to give that opportunity to other people as well.

I’m not saying that everyone has this American Dream [to fulfill], but if people are presented with opportunities, I want to make it easily available to them in whatever way I can.

What is your focus at Legalpad, who are your clients?
Right now we are laser focused on O-1 and EB-1 [visas] for startup founders with venture capital funding. We are also able to get O-1s for people who are integral to forming and growing a business. The people that want it done now tend to be the founders. I also take care of the other visas that come in, H-1Bs and E-3s.

Is your background in immigration law?
No. After college I joined a startup called Teleborder [that hired international employees], which was a Y Combinator company. It was an amazing opportunity for me because I learned everything about immigration, tech and how to run a business. You really can’t pay for that kind of education.

That’s where I met [co-founder] Todd, he was a Teleborder network attorney. I enjoyed working with him, he’s like a teacher without being a teacher—I just really understood the way his mind ticks.

Teleborder eventually got acquired by [the HR company] TriNet. I was at that corporate job for a while when Todd called me up and said, “Hey, I’ve been automating my law firm. Do you want to come join me and turn this into a company?” And I said, “Yes!”

Was that job security scary to give up or were you ready?
Honestly, yeah, it was risky. I had a pretty sweet gig when Todd approached me. I was bracing myself [laughs] for my mother’s reaction when I told her.

But I was really excited to get back into the startup scene, it’s where I’m in my element. I understand the risks. I’m in my 20s, if I don’t do this now, when am I going to do it?

Your website claims it takes 60 minutes to apply for a work visa, that seems very fast.
It’s how long it takes the client to fill out the form who is applying for an O-1 visa. That’s tops.

And how long does it take to submit to USCIS?
We aim to put everything together [in] four weeks, but that’s contingent on how quickly we can get reference letters from that person’s investors or previous founders.

And if the individual wants to pay for premium processing, we can get a response from USCIS in two weeks from submission. Regular processing is out of our control, four to six months, maybe a little longer.

It’s worth it to pay for premium processing!
Generally, yes, especially if your company is on the line. I’m always surprised when people don’t opt for that, but sometimes people are already here on another visa, they have the time.

So how many visas has Legalpad processed?
The O-1s, they are just grabbing them out of our hands. We have 27 in the pipeline right now, and we’re capping it monthly, just so we can learn through the processes and do some quality control. Last H-1B season, we did 67 visas; this season we did less, about 35.

What’s the fastest you’ve submitted a visa application?
Depends what kind. I can turn around a TN-1 visa in a day; that’s the one for Canada. I’ve put together an H-1B in a week. I’ve seen Todd put together an O-1 in less than two weeks. It depends how prepared [the client is]. We’ve only had about five denials, and some of those weren’t in our control.

If someone says they need a visa, can you quickly assess if they’re eligible?
Not quite, but that’s because I’m not a lawyer. Todd is no longer a practicing lawyer, so we have an outside attorney who vets the person.

Do you reject potential clients who are not qualified?
Oh, certainly. We’re not in the business of pulling visas out of the air. We’re not going to take your money and let you submit something we don’t think is a viable case—unless you insist. And in that case, you need to talk to our attorney! [Laughs]

Do people ever complain that you’re helping “immigrants take jobs from Americans?”
I’ve gotten that before. To that, I just have to say that’s not the case at all. Hiring an immigrant for an H-1B has an added cost that companies take into consideration when they make that hire. If they can mitigate that cost, why wouldn’t they? It’s because immigrant talent is necessary. It’s needed.

As for immigrant founders, don’t you want people to come here and innovate? That’s what gives the U.S. a leg up over a lot of other countries; it’s because we are the hub for immigration and innovation. To say a U.S. citizen’s job is being taken away by an immigrant founding a company—I don’t see the logic in that.

How did you get to the U.S. from the Philippines?
I was born in the Philippines; my mom was a single mother, which was tough. She met my step-father, who was American, and we moved to Hawaii. We lived on a macadamia nut farm, hunting pigs, putting down irrigation. I was also trying to do well in school, learn English. I literally sat in front of a mirror practicing my diction because my mother said, “You need to learn English if you are going to be successful here.”

Then, we moved to Palo Alto for the better schools, a mixed family—huge culture shock. In Hawaii, there is a large Filipino community.

Was Silicon Valley, “Silicon Valley” at that time?
It was 2000, so it was all kind of starting. I lived a few blocks away from Steve Jobs; I remember Apple was just starting to gain traction. I think that’s why working in tech, with a politics degree [laughs], came natural to me after college.

Growing up in Silicon Valley, I saw a lot of innovation. I think that was another reason immigration is important to me; we can’t continue to have innovation if we’re closing doors. 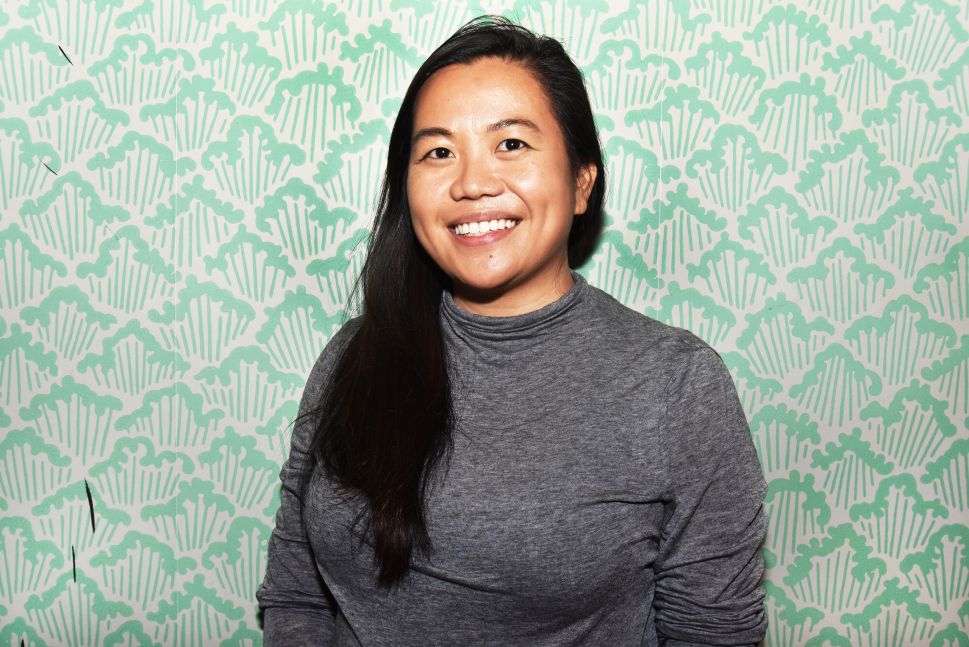