Some of the most enduring products we know are things we already knew—they’ve just been dressed up in clever new packaging. Cover albums and blockbuster reboots are ample proof of this, but another trend that’s infiltrated the masses in recent years involves companies throwing a ton of intellectual and monetary capital at the idea that water needs to be rebranded. That’s right, : a resource fundamental to the survival of most life forms on Earth.

On Tuesday, Mike Cessario, a former creative director at Netflix and the brains behind many viral marketing campaigns, announced that he had drummed up $1.6 million for his canned startup, Liquid Death.

Again (and we cannot stress this enough), Liquid Death is simply cold spring packaged in a tallboy can made to look like a swarthy beer brand. An advertising spot launched today on behalf of the product shows a classically handsome blonde hiker in lederhosen being decapitated with an ax by a hulking executioner who has a Liquid Death can for a head. “Liquid Death mountain will murder your thirst,” an enthusiastic female narrator intones.

The animated spot looks like a cross between BoJack Horseman and a hardcore metal episode of The Simpsons, which actually might have been the creative team’s intention. (There’s also a ludicrous amount of blood in the ad.) Cessario spent his youth playing in heavy metal and punk bands, which makes his apparent transformation into the worst kind of capitalist parasite all the more ironic. Rather than throwing his energies into something like a global warming awareness campaign to help the public understand just how endangered our planet’s supply is, Cessario has chosen to slap an “edgy” sticker on a can filled with H2O and sell his product as an alternative to plastic bottles. Liquid Death is therefore just environmentally conscious enough to earn a merit badge. But wouldn’t the best thing for the planet be not to manufacture these foul-looking, truly puerile cans at all?

Seriously, reading an interview with Cessario is like feeling your brain melt out of your nostrils in real time. Back in January 2018, he was still struggling to get Liquid Death off the ground after an Indie GoGo campaign didn’t produce great results. “[I was] just thinking through exciting ways to rebrand as a substance that was totally opposite of the current yoga accessory stigma, while also having a truthful insight that isn’t complete bullshit,” Cessario told Adweek at the time. “And since we are competing with the most explosive rebellious brands on the market, our healthy brand had to be even more punk and fuck-you than energy drinks.”

Ah, yes. Because of course the most punk thing you can possibly do on this earth is hawk canned on Amazon. 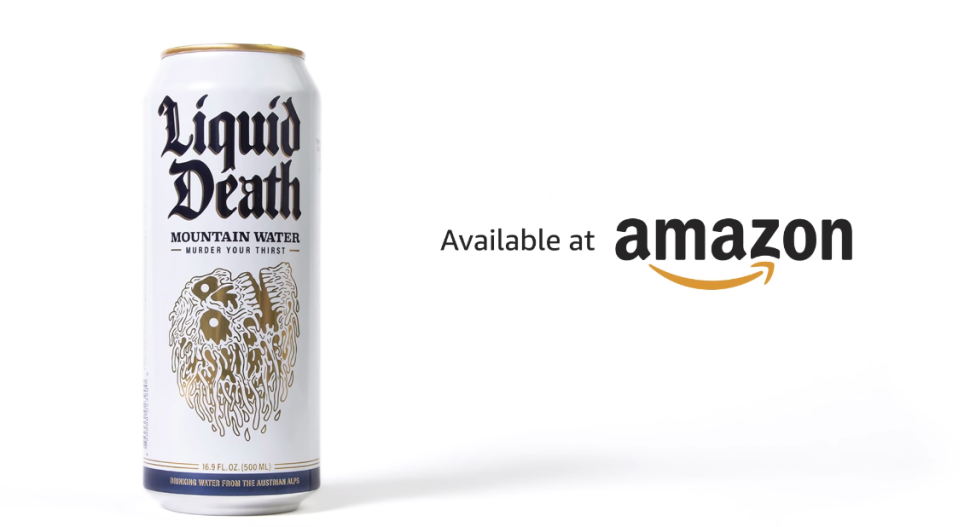