By today’s movie standards, even a good actor is forced to appear in a fair amount of trash to make ends meet and guarantee career survival. Now Octavia Spencer gets her turn. In a violent, stupid and nauseating creature feature called Ma, she plays a cruel, bloodthirsty monster who tortures and kills off half of a suburban town for fun. It’s a horrible disgrace, but don’t say I didn’t warn you.

When a waitress named Erica (another signature loser role for Juliette Lewis) moves herself and her teenage daughter Maggie (Diana Silvers) from San Diego back to the small town she once called home, the girl wastes no time falling in with a gang of teens auditioning for jail time. Hanging out in front of a liquor store waiting for a naive senior citizen to come along, break the law, and buy them some booze, they encounter a nice, middle-aged lady with what looks like a three-legged dog who not only takes pity on them and supplies them with beer, but invites them back to her house to drink it. The woman is a lonely social misfit named Sue Ann, played by—wait for it—the miscast, misguided Spencer who works for a mean-spirited local veterinarian (Allison Janney in a walk-on).

Foolishly, the kids accept Sue Ann’s friendly offer to hang out in her basement and call her “Ma.” In record time, their new motto is “let’s get filthy” and Ma’s cellar becomes the place to do it. Obviously, none of these delinquents has ever seen a horror film, or they would know Ma has serious psychological problems—not to mention a supply of hypodermic needles.

By the time they decide to boycott Ma, she’s not having any of their rejection and plays on their sympathy. “Pancreatic cancer,” she lies. This may be the first movie in history where those two words get a laugh. So does Ma’s demand that the hottest boy in the gang strip naked for her to ogle. What is going on here? In time, we get it. Sue Ann has a toxic connection to the kids’ parents, all former classmates who abused and ridiculed her as a teenager, then left her pregnant. Sue Ann, in true horror-flick fashion, is using her basement as a lure to act out revenge.

The brutality is gasp-worthy. First she ties up her old flame (Luke Evans) and plays with his privates (I kid you not) before perfecting the art of castration. Then the real fun begins when she turns her attention to the kids themselves, burning their naked flesh with steam irons, butcher knives and animal tranquilizers stolen from Allison Janney, who hangs from the neck turning green in the closet.

At one point, she seizes needle and thread and sews a girl’s lips together. When the cops arrive, she finishes them off, too. During every savage attack, the audience laughed uproariously. Is this what we’ve come to? The movie has a few thrills, but I would not, under an animal tranquilizer myself, consider it a comedy. The screenplay, by Scotty Landes, should have been ignited with lighter fluid and burned.

This travesty, trust me, is nothing more than a career-damaging favor. The director of Ma is Tate Taylor, who proved himself a wise, clever and original filmmaker with the 2011 comedy of Southern manners, The Help. That dandy dandelion of a Southern parody of Eudora Welty won Spencer an Academy Award and launched her amazing career. Janney was also in it. Ma is a way for both of them to pay Taylor back. They should all have stayed in bed. 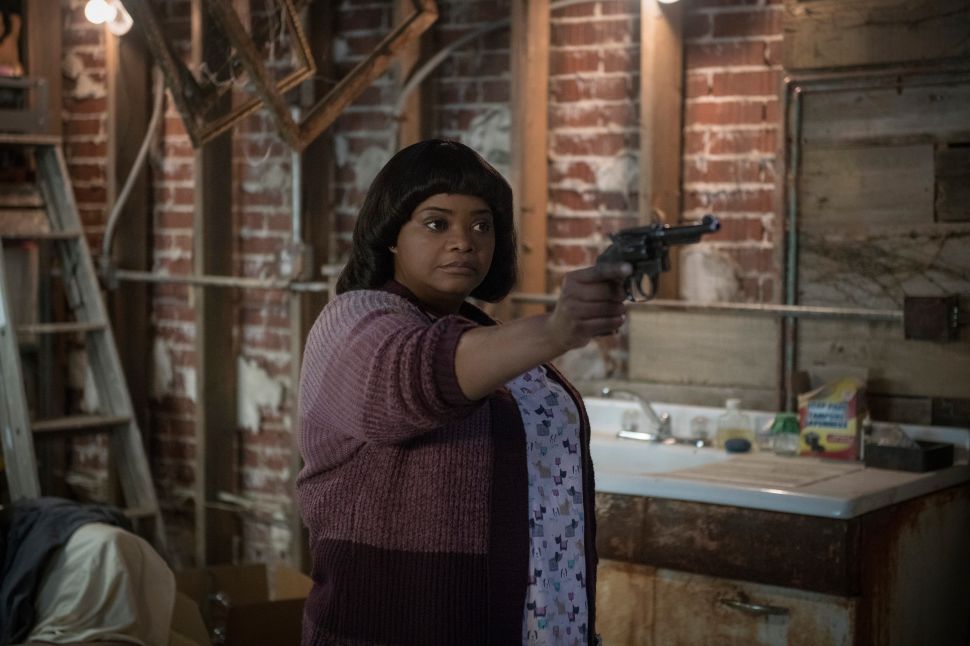