While you wait for Red Bull Theater’s Mac Beth to begin at the Lucille Lortel Theatre, do not—I repeat, do not—read your program. Scan the cast list and a bio or two, but leave the dramaturgical notes for the subway ride home. Unless you want the conceit of this production and its shock ending spoiled—and those are the main reasons to see it. Adaptor-director Erica Schmidt’s anarcho-feminist gloss on the Scottish play may not boast humongous Stonehenge-y sets and flying witches (like Kenneth Branagh’s XXL version in the Park Avenue Armory) or a Scots virtuoso tackling all the roles (Alan Cumming on Broadway), but it’s got a wicked forest vitality all its own.

Schmidt’s wiccan-centric approach gives off a strong St. Trinian’s vibe: the seven women of the ensemble are dressed in private-school uniforms, playing students who have gathered to act out Macbeth for some secret ritual end. The location is a secluded clearing in the woods with an abandoned, upended couch, a pond and a beat-up bathtub. With these bare scenic elements, and props the girls yank from their backpacks, the story of a regicidal thane and his goading wife unfolds in 90 breathless minutes.

The giddy, irreverent pace and edited text help offset the inevitable stylistic trade-off: not all the actors are giving a Banquo, Macduff or King Duncan for the ages (whatever that might be). Each young performer must maintain both her baseline role—a teenager with specific beefs and buds within the group—as well as multiple parts inside the tragedy. Witches one, two and three (Izabel Mar, Sophie Kelly-Hedrick and Sharlene Cruz) juggle Fléance, murderers, doctors, the Porter and dozens more—and they’re not precious about any of them. I particularly liked Cruz’s Duncan, who comes across as a slightly doofy dudebro, and when Kelly-Hedrick’s squeaky Malcolm tells Macduff that the women of Scotland “could not fill up the cistern of my lust,” she drawls cistern with surprising glee.

The playing of the lead roles is generally appealing, but uneven. Isabelle Fuhrman’s Macbeth, the heaviest lift, is a valiant attempt on a part that’s hard going, no matter what your age or gender. Fuhrman can let her eyes go dead and she flattens her tone without losing too much meaning in the verse, and she grows into the bleakness of the tyrant as the show goes on. Ismenia Mendes stays within gender lines as Lady Macbeth, and her line “unsex me here,” resonates with menstrual rage, as she digs into her knapsack and tosses a handful of tampons into the grass. In terms of lyrical agility and richness of character, Mendes is the strongest presence on stage; I’d love to see her Lady M. in a less circumscribed production one day. As Macduff, the tall and dignified Lily Santiago cuts an appropriately righteous figure. And Ayana Workman’s Banquo has a refreshingly humorous affect, contrasting nicely with her post-murder manifestation as a spidery ghost, which suggests the girls have been watching J-horror movies.

Whether or not you’re a Shakespeare traditionalist, you may wonder: Do we get anything new out of Schoolgirl Macbeth? Certainly the gender economy of the text can use a shaking up—maybe the Roman plays are equally obsessed with manly behavior—but seeing Macbeth this way, you realize: gee, these characters seem really insecure about their penises. Watching young women commandeer the weird energy of the play and use it to express their hormonal, gender-fluid ends—that’s more engaging than another dutiful slog through the Park or the bland competence of the Royal Shakespeare Company.

Where Schmidt’s inspired framing concept falls down, however, is on the non-Shakespeare side. I kept wondering who these girls were and what the tensions were among the group. Did something outside their circle—parents, teachers, online activity—drive them to this spot in the woods to stir cauldrons, stab kings and go crazy? It may be all this subtext was worked out in rehearsals, but it doesn’t come through with enough force or clarity. I wanted more Macbeth on the cutting-room floor, more material about the students’ lives, less fidelity to the Jacobean source. I guess the program’s essays, by a scholar and a literary manager, fill in some blanks, but no show should need them to complete the experience. 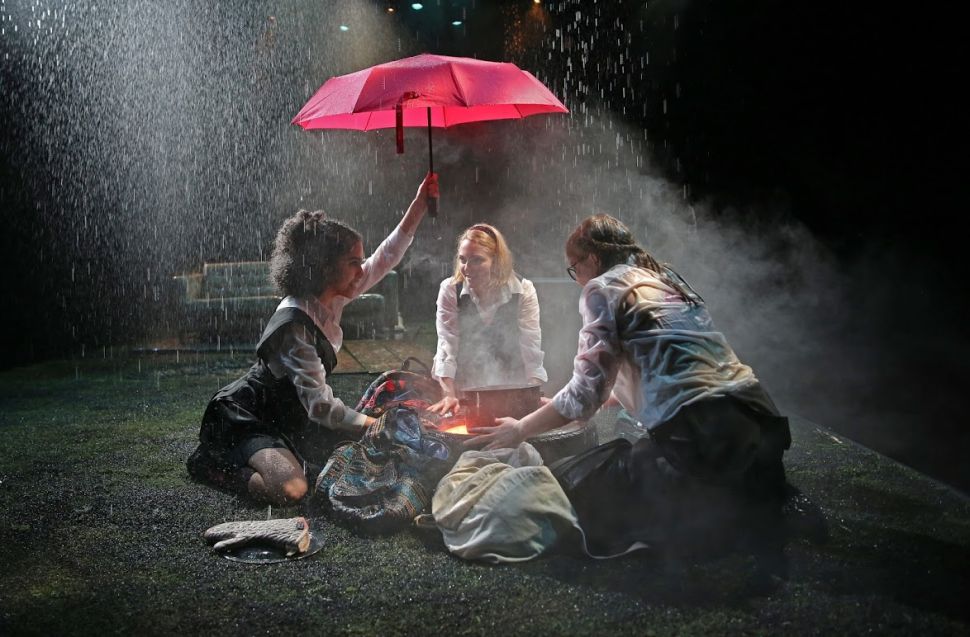