Believe it or not, there’s been a battle over Memorial Day that’s lasted longer than many of the wars our veterans fought in. There’s a demand by some to have a “separate” Memorial Day, as well as a clash among several places as to which hosted the “first” Memorial Day. It’s time to end these arguments by putting our fallen veterans first.

Remember the Dead, or Refight the Civil War?

If you’ve ever read about the history of Memorial Day, you’ll know the holiday’s origins are in the Civil War. And you might have heard that it used to be called “Decoration Day.” But after that, there’s little agreement, as some groups seek to refight the Civil War by having a “separate” holiday.

In fact, rather than recognizing the more than 600,000 soldiers, sailors and others who died during the Civil War, there’s a desire on the part of several Southern states to segregate the holiday.

In fact, Mississippi, Alabama and South Carolina all hold a “Confederate Memorial Day,“ with the states closing their government offices on a different day—not Memorial Day. Some choose April 26, the day Southern General Joe Johnston surrendered to General William T. Sherman in North Carolina, all but bringing the Civil War to a close. Others opt for Jefferson Davis’ birthday in June. South Carolina’s coincides with the death of General Thomas “Stonewall” Jackson, who was mistakenly shot by his own troops in the darkness during the Battle of Chancellorsville in Virginia. I hear Texas celebrates Robert E. Lee’s and Davis’ birthdays.

Georgia used to do the same, but chose to remove the “Confederate” reference and simply calls it “State Holiday.” Despite this progress toward recognizing all soldiers, instead of playing politics, there’s already a move to bring back “Confederate Memorial Day” in the Peach State, with a defender of the KKK leading the charge.

While some in the South still seek secession from America by having a separate Memorial Day, the history of Memorial Day in the North is littered with opportunistic politicians seeking to connect votes to soldier sympathy in the 1800s, connecting their own military service with public service.

Meanwhile, more thought is given to battling over the placement of monuments and arguing over the generals and president of the Confederacy, while those who fought and bled are becoming as forgotten as their battlefields, shrinking every day due to development or neglect. It’s not a Memorial Day those who died really deserve.

Who Remembered First? Or What Matters More?

Equally myopic may be the arguments over where the first Memorial Day, or Decoration Day, officially began. Some contend that it’s the city of Charleston that was first, with mothers going to graves to retrieve the dead, in 1865.

“All told, some two dozen communities—including Boalsburg, Pa.; Carbondale, Ill.; Charleston, S.C.; and a pair of Columbuses, one in Georgia, the other in Mississippi—have made the claim,” states the American Battlefield Trust.

Grand Magazine documents the arguments just between Columbus, Mississippi, and Columbus, Georgia, as to who has the stronger claim to being “the first” to honor the soldiers, one that was even mixed up in presidential politics recently in terms of being recognized as first.

Then, the American Battlefield Trust went on to proclaim a small New York town to be the first to honor “Memorial Day” officially. “In 1966, Congress intervened to resolve the not entirely friendly dispute by issuing House Concurrent Resolution 587, which declared Waterloo, N.Y., a small manufacturing center in the state’s Finger Lakes region, to be ‘the birthplace of Memorial Day.’ Originally proposed by Albany-area congressman Samuel S. Stratton, Waterloo’s primacy was based upon the fact that, unlike the ceremonies of other claimants, its commemoration had been formal, community-wide and recurring,” writes the American Battlefield Trust.

In fact, there are some others vying for that award of being the “first” to have a Decoration Day, including Savannah, Georgia and Warrenton, Virginia. Charleston, S.C. tries to solidify its hold on the claim of being the first by claiming theirs happened in 1861, all according to LiveScience.org

Then, generals-turned-politicians James Garfield and John Logan would battle for who gave the first Memorial Day speech. Each would also vie for the presidency, though only Garfield would win it. Again, these were more about waving the “bloody shirt” than bringing this country back together, as it should be.

Congress and the president switched Memorial Day to the last Monday in May with the Uniform Holiday Law back in the early 1870s.

A Modest Proposal for Memorial Day

It seems nobody has been forgotten in these dust-ups over Decoration Day, except maybe those who need the recognition. And those are the ones who gave their lives so that this nation just might live.

So this Memorial Day, don’t separate this country again by pushing for a divided holiday. And perhaps the debate about who was first obscures the truth: that many people in many states, all Americans, thought that it was a good idea. It’s finally time to restore the holiday and take it away from those who can’t let go of the Civil War, as well as those communities who demand to be recognized for being foremost. Instead, let’s honor all of the men and women, those of all races and ethnicities, who fought and died so that this country may be free. 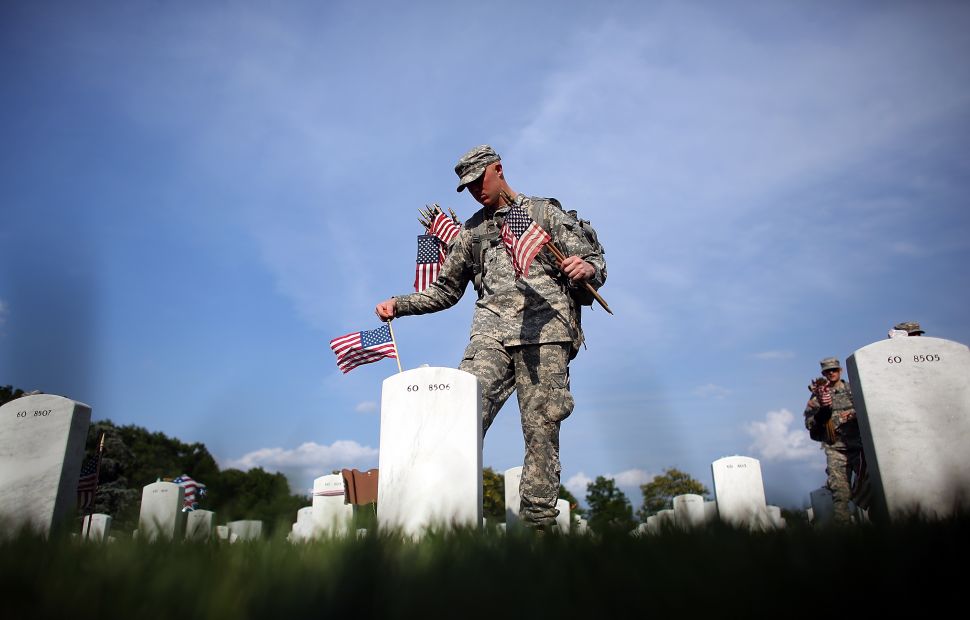