Museums these days face “a philosophical question,” Molly Giordano, chief financial officer of the Delaware Art Museum in Wilmington, believes. That could be said for any number of issues art institutions are currently grappling with—when to return items that are claimed to be stolen or looted, how to increase diversity among staff and visitors and whether objects should be deaccessioned among them. But the specific philosophical question at hand for Giordano, however, is the one about the cost of admission.

There is no consensus among museums across the country about what, or if, to charge admissions, but last week the Los Angeles Museum of Contemporary Art (MOCA) decided to make going to the institution free, thanks to a $10 million gift from MOCA Board of Trustees President Carolyn Powers.

MOCA’s director, Klaus Biesenbach, has been discussing eliminating admissions ever since taking on the job there last fall, according to the museum’s chief communications officer Sarah Stifler. “He believes that it is important for a museum to be a citizen among citizens and that a museum is more aligned with public libraries, where you can walk in for free and learn something.” Stifler added that this viewpoint resonated with Carolyn Powers “who has been interested in culture’s ability to transform lives.”

The action by Powers follows a decision two weeks ago by the Art Gallery of Ontario in Toronto to eliminate admissions for visitors 25 years and under, which was close on the heels of the Museum of Contemporary Art Cleveland deciding to do away with admissions back in mid-March.

Stephan Jost, director and chief executive officer at the Art Gallery of Ontario, claimed that the decision to make entry free for anyone under the age of 25 was motivated by the desire “to make art as accessible as possible, to make visiting as simple as possible, and to make museum-going a habit for the next generation.” He added that this program is “risky, and we project a $2 million revenue gap in the pilot year.”

Others have moved in this direction, although in a more limited way. In late December, the Delaware Art Museum announced a $1 million gift by E.I. du Pont de Nemours and Company that will cover the revenues lost through making Sundays admissions-free, and financial support from Publix Supermarket Charities, the John S. and James L. Knight Foundation and Heckscher Foundation for Children has created free days at the Perez Art Museum in Miami every second Saturday of the month.

“Museums want to be approachable. You don’t want the price of admissions to museums to keep people away,” Giordano said. She noted that museum officials have talked about eliminating admissions altogether and not just on Sundays, “but we haven’t done any research on that,” and added that among senior staff, “there is more of a gut feeling that people value things more when they have to pay for it.”

That gut feeling exists throughout the museum world, and the value of the art museum experience would seem to be high. Adults pay $25 at the Boston’s Museum of Fine Arts and $27 at the nearby Isabella Stewart Gardner Museum. It is no less expensive to visit the Museum of Modern Art in New York ($25), the Guggenheim ($25), the Whitney ($25), the Barnes Foundation in Philadelphia ($25), the Art Institute of Chicago ($25), the San Francisco Museum of Modern Art ($25) or the Los Angeles County Museum of Art ($15). A family of four could spend $80 or more just on admissions, though many of these institutions also have their version of a regularly occurring free or pay-what-you-wish admission window.

But still, the steep prices strike some others in the museum community as wrong. “The assets of the museum are for the public,” said Gary Vikan, former director of the Walters Art Gallery in Baltimore, which eliminated admissions in 2006. “Admissions place a barrier between the public and those assets. The more you charge, the more you cut off access.” He added that there is a “correlation between what’s charged at the front door and what the CEO of the museum makes.”

This all gets into a question of numbers. According to a survey of members conducted by the Association of Art Museum Directors (AAMD), “on average, most visitors spend under $8 per museum visit, including the cost of admission and any ancillary purchases in museum shops and restaurants,” while the per-unit cost of a visitor is $53.17, suggesting that each institution loses money on everyone who comes through the door. (The math of that involves the cost of maintaining a large building, with round-the-clock security and climate controls for the permanent collection, as well as salaries, divided by the total number of visitors.)

That same AAMD survey found that admissions account for only seven percent of the average institution’s overall revenues, although the range can be wide. Before 2006, admissions revenues accounted for only two percent of the Walters Art Gallery budget, whereas at New York’s American Museum of Natural History, where admissions are $23-33 (depending upon whether the adult visitor sees none, one or all of the special exhibitions), the percentage is approximately 27 percent.

Stifler stated that at MOCA, the loss of admissions revenues amounted to $1.3 million annually, which rises to $2 million if memberships are added, since many people purchase memberships in order to avoid having to pay every time they go to a museum. “That’s a big chunk of change,” she said, adding that Carolyn Clark Powers’ $10 million gift will certainly soften the blow. It is likely, she noted, that just as Dallas Museum of Art and some other museums, visitors will be able to come through the doors for free but still need to purchase tickets to see special exhibitions.

Update: An earlier version of this article misstated the admission price for the Barnes Foundation. The piece has been amended to reflect this change. 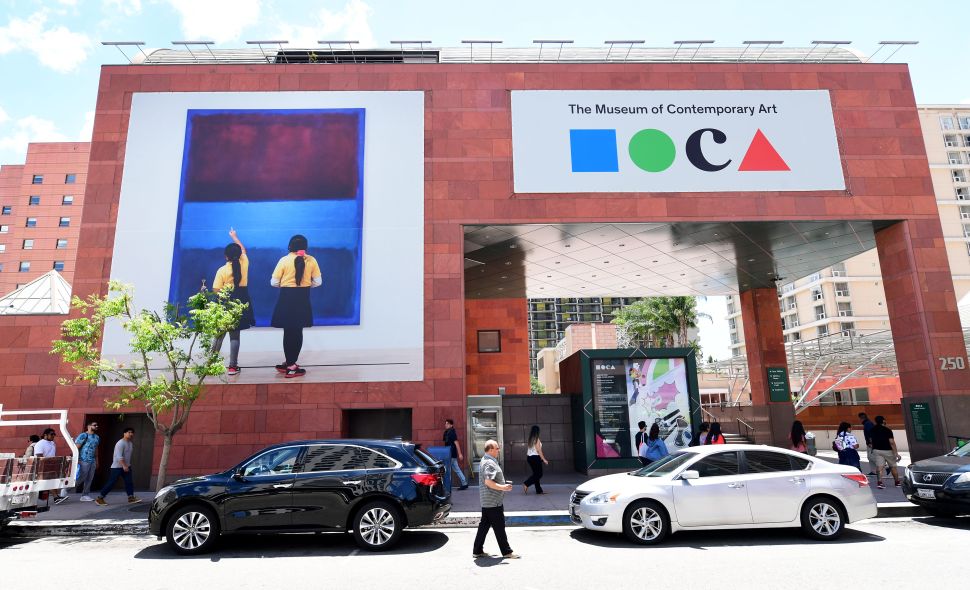