Clients exiting Mohan’s Tattoo Inn, located in New York City, might display tattoos of Hindu and Buddhist deities like Shiva, Kali or Tara on their arms, legs, torsos and backs. Or maybe a spiky dragon back tattoo with a long slithery tail down the thigh, perhaps a fire-breathing yak chest tattoo—all placed amid fanciful waves, lotus flowers or intricate geometric patterns, nearly Escher-like in detail.

The tattoo artist behind these wild and dramatic tattoos is the gentle, mild-mannered Mohan Gurung, originally from Nepal. He specializes in tattoos inspired by motifs and iconography found in Nepal, with a dash of Japanese, Thai, Polynesian and old-school American imagery. He’s been inking clients in New York City since 2014 when he immigrated from Nepal.

Inside the minimalist waiting room, a few steps below street-level on 14th Street, reggae music quietly plays. A carved wooden Nepali mask depicting a horned creature eating a snake hangs on the white walls. A central coffee table is stacked with tattoo photo books and binders full of snapshots of Gurung’s tattoos on clients.

At the height of Gurung’s success in Kathmandu, Nepal, where he still maintains a tattoo studio and visits periodically, he decided to launch a tattoo business, mid-career, in New York City. He first operated a studio out of Jackson Heights, Queens, a neighborhood with a large Nepali population. After his Queens landlord kicked him out, he moved the operation to Manhattan’s 14th Street—where he works with his 24-year-old son Arjun—one and a half years ago.

As reggae plays and the faint buzz from Gurung’s son working on a client’s tattoo in the back room can be heard, Gurung explained why he left his thriving business in Kathmandu to launch anew in New York City, one among hundreds, in relative anonymity.

What’s your tattoo specialty?
The main design is Nepali, but I get inspiration from everything. I specialize in the patterned backgrounds.

Did you grow up with these images and motifs in Nepal?
Yes, there are carvings everywhere.

Do clients come into your shop knowing what they want?
Some say, “Mohan, do something really… look at me, do whatever you feel comfortable with, I trust you, do your own style.” They give certain criteria: not violent, no skulls, here to here [pointing to his upper arm]. Some clients have ideas and want us to create a design; others come with a specific design.

Have you ever tattooed anyone’s face?
I have done a couple of them. I always talk with the client first to make sure they know what they’re doing.

What if someone wants a hideously ugly design?
We do everything, we have to pay the bills.

How has it been to open a tattoo shop in New York City, a city where there are hundreds of other tattoo artists, after being so well known in Kathmandu?
In the Kathmandu shop, which is still there, I had seven artists. I used to just take the best jobs. The rest, I’d pass on to the others. There were one-year waits for appointment. I had a manager. But I was a little tired of that. I wasn’t comfortable, there’s a lot of pressure. I was getting lazy too; everything came to me. I wanted to be in a place where nobody knows me, so I can do what I want.

Since I moved here, I’ve learned something new everyday, but it’s been really difficult. I went from many customers, to nearly no customers. I used to not take the small jobs I didn’t want in Nepal. Now, I have to take each and every job. I’m slowly building my clientele, it’s getting better.

I did lots of research before I came. I didn’t just move—I was mentally prepared.

What made you come to New York City in the first place?
I’ve been to many tattoo conventions all over the world. When I attended a Long Island tattoo convention, I passed through New York City, and I felt so comfortable! New York is full of immigrants, you don’t feel that much pressure to, you know…

Conform to a certain cultural standard?
Yes. I feel more open, comfortable here. So that’s one of the reasons I came. The other is that it’s the capital of the world.

Your first shop was in Jackson Heights, Queens, with a big Nepali community, was that helpful?
All my friends were in Queens; they suggested I open there. All the Nepali food I could ever want is there—[Nepali] pickles and the best momos [Tibetan dumplings]! There are so many varieties with different sauces.

You used to give momo tattoos during the annual Momo Crawl in Jackson Heights, right?
Yes, I did it for three years. It was fun. I’d never made momo tattoos in Nepal, but I did so many here! Every year, we made 17 of 18 momo tattoos; some people returned each year and got a different style of momo tattoo.

So why did you move to Manhattan?
Everything in Jackson Heights was very good, but suddenly the landlord asked everyone to move because they were going to demolish the building. So, I had to move. I put all my money into that space, all my retirement because I thought I would be there forever. I was disappointed, a really a big loss for me.

But, I remembered that when I was in Nepal, my dream was to open in Manhattan. I thought, let me give it a try. Even if I die, I will feel like, I did it!

As it turns out, they didn’t even demolish that building! They asked me to come back, but it’s not that easy to move around a business.

Did the move to the East Village change your business?
I lost 75 percent of my clients from Queens.

Wow, Jackson Heights isn’t that far away, can’t they take the subway?
I thought the exact same thing, but it didn’t work out like that.

Are your clients primarily Nepali?
In Queens, I used to have 65 percent Nepali and 35 percent a mix of people. Here, it’s the reverse: 15 to 20 percent Nepali, the rest is a big mix.

Do you have a problem with non-Nepali clients getting Nepali-inspired tattoos?
No, that’s fine.

How did you start tattooing in the first place?
I used to draw, just for my piece of mind, when I was a kid. I was a very shy person. I found someone who did tattoos really well, and I learned a little bit with him, but just for fun.

I started tattooing friends, then other friends wanted tattoos. Everyone said I should open a studio, especially in a tourist area. I said, “No, I can’t, I’m too shy.” They pushed me.

I opened a very small studio in 2000, one of my sisters helped me with financing. The first day was really difficult. I was so shy going into the shop—my own shop! [laughs]

I got used to it over the next couple of weeks. Slowly, I started getting clients, lots of tourists appreciated my work.

Tattoos are so mainstream today. When you opened your shop in 2000 were tattoos considered strange?
The trend was just starting, it was good timing for me. 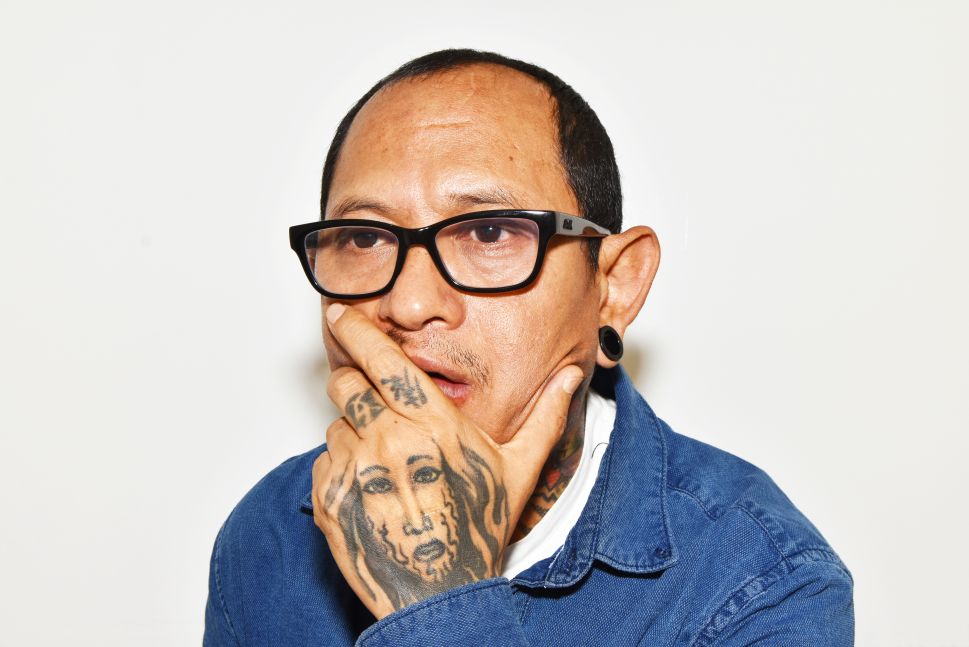