For the most part, Nancy B. is just a regular person. She’s 29. She lives on Staten Island. She has a boyfriend, a child and a job. She’s also a former drug user in recovery who has administered naloxone (sold under the brand name Narcan), a medication that reverses opioid overdose, “quite a few times.”

“It saves lives,” she told Observer. “Anything I can do to make sure that’s a known fact, and make it available to everyone, I will do.”

Nancy isn’t alone in her desire to see naloxone made more prevalent. In New York and other cities across the country, there are programs in place to make sure regular, everyday citizens have access to naloxone. Not only could you attend one of the free certification trainings or go to a pharmacy and start carrying the life-saving medication, but a growing number of people, like Nancy and some community organizers and leaders, argue you should.

Whether you’re close to someone who uses drugs or not, you could administer naloxone, too, and as rates of fatal overdoses rise, you might be closer to someone at risk than you realize. In fact, you could be at risk yourself: Fentanyl, an opioid 30 to 50 times more powerful than heroin, has been found in cocaine and other non-opioid street drugs in New York City, which means even occasional users who choose club drugs over pills or heroin could still experience an opiate overdose.

Naloxone works the same whether it’s being used to reverse the overdose of a habitual heroin user or an infrequent partygoer visiting the Lower East Side; it works in two to five minutes, has no effect on alcohol or other drugs, and can be administered nasally or through an injection.

“I think we should be handing [naloxone kits] out like Pez,” said Van Asher of St. Ann’s Corner of Harm Reduction in the Bronx, who made the educational video above to raise awareness of naloxone and destigmatize its use. “Like Halloween candy.”

Of course, as it stands, it’s not that simple, but those with the power to distribute the drug are making an effort to cast it wide. According to Emily Winkelstein, the director of overdose education and naloxone distribution at the NYC Health Department, naloxone is a prescription medication made available in New York through approximately 250 registered opioid overdose prevention programs, or OOPPs, and over 1,000 participating pharmacies through a standing order.

There’s been an increase in the amount of naloxone kits being distributed to OOPPs for community training classes since 2009. Winkelstein said in 2016, the Health Department gave out 15,000 kits. In 2018, they provided 128,000. Still, that doesn’t mean resources are unlimited. It just means the need for distribution is great, and in New York, the Health Department is doing what it can to meet that need within the established framework around the prescription medications.

Like naloxone kit distribution, overdose deaths have increased, too.

Remember that figure—1,487 overdose deaths in 2017—but keep reading. We’re not done yet.

In 2016, fentanyl was found in 37 percent of overdose deaths involving cocaine without heroin. It was 11 percent just one year earlier in 2015. The 16 percent increase caused the Health Department to launch a campaign in 2018 to warn New Yorkers: “People who use cocaine occasionally may be at risk of an opioid overdose.”

Fentanyl has been found in heroin, methamphetamine and ketamine, too, on top of benzodiazepines and opioid painkillers from non-pharmaceutical sources.

When analyzing those 1,487 overdose deaths from 2017, the Health Department noted that the increase in deaths from 2016 was two percent, which contrasted starkly with the 51 percent increase from 2015 to 2016. That information was released under the headline, “Epidemic Continues, but Rate of Increase Significantly Slows Down.”

“That’s considered a win!” said Asher. “[But] that’s a loss. That’s a huge loss. That’s us being asleep at the wheel. Every single one of those represents a human being.”

Among community organizers and others close to drug users, that’s not an uncommon sentiment.

“This is an epidemic,” Nancy explained. “Every single life matters. Nobody wants to be an addict. It’s the worst thing in the world—being your own worst enemy, wanting to stop so bad and battling your own mind 24/7. It’s so brutal.”

Among others, though, especially those who don’t consider themselves closely linked with any drug users, feelings toward naloxone access are a lot less passionate.

Responding to questions from Observer about community access to the overdose-reversing drug, 21 of 45 individuals indicated they’d be more likely to seek out naloxone, either via a participating pharmacy or through a training class, if they personally knew someone at risk of an overdose.

“Sad to say,” admitted one woman in Virginia, “I should be helping my community more, but what would boost my motivation is if someone very close to me had an opioid addiction.”

“Everyone should have Narcan because everyone knows someone who suffers with addiction,” asserted Nancy, who says she has used it on her boyfriend and on a woman she saw overdosing in a park. “If they think they don’t, they’re in denial. Even if they’re lucky enough not to know someone, they can save the life of a stranger.”

In 2016, Winkelstein said, laypersons with naloxone saved approximately 400 lives in New York alone, though that number is likely lower than the real amount, given not everyone who performs a reversal will report it.

“We know that there are more people using naloxone in the city than we hear about, and we acknowledge there’s room for improvement,” she said, noting that naloxone kits include a phone number to call and report when the medication is used. There’s even an app—for both IOS and Android—that provides information on opioid overdose and naloxone, and gives NYC’s smartphone users the chance to report when they use naloxone, assuring them, “We will not collect your name or any personal information.”

Unlike Asher, Winkelstein stops short of saying everyone should carry it—”it’s important to be thoughtful” and consider the availability of resources, she said—but noted that she’s known people who have stories similar to Nancy’s about reversing the overdose of a stranger. Winkelstein said the naloxone made available by the Health Department’s initiatives should be sought out only by those who are likely to witness an overdose, but casts a wide net when describing who that might be, from friends and family members of opiate users to residents of the hardest-hit communities, “specifically, the Bronx, Northern Manhattan and Staten Island.”

In a perfect world, Asher said, he’d like to see naloxone in “every medicine cabinet and every first aid kit,” as well as in elementary schools (“Let’s have an assembly!”), and even in emergency boxes on street corners in high-risk neighborhoods.

The NYC Health Department has been using a neighborhood-specific focus, notably targeting the Lower East Side to raise awareness of the fentanyl discovered in cocaine. Other campaigns highlight the importance of carrying naloxone in case a neighbor or family member shows signs of an overdose. In 2016, a campaign titled simply, “Save a Life: Carry Naloxone” featured bright yellow posters all around New York.

“Certainly, when I personally talk to people about what I do, people recognize that campaign,” Wilkenstein recalled.

“I don’t think NYC made it clear enough about the resources for Narcan. I’m sure it’s readily available; I just don’t hear about it often. I’m not sure about the laws, needing a prescription, et cetera,” Nancy, who received a naloxone kit upon completing a rehab program, admitted.

Nicole McWilliams, a 24-year-old also from Staten Island who knows a few individuals who use opiates, recalled seeing “one sign” advertising a naloxone training near her, but feels “that more advertisement would increase [her] likelihood of attending a session.”

For now, talk of emergency boxes filled with naloxone on street corners, school assemblies teaching young children how to spot and respond to an opioid overdose, and more aggressive advertisements for training classes are all fine, but there are some absolutes to contend with while those discussions go on. Fentanyl has been found in non-opiate drugs in New York City. The rate of overdose deaths has been rising for years. Thousands of lives have been saved by laypersons carrying naloxone. A person interested in carrying naloxone can attend a training in New York City or obtain it through a standing order in Chicago, to name just two cities with resources available.

Community leaders are split on whether everyone should carry naloxone and what the optimal distribution looks like, but Nancy, at least, is sure of what needs to be done: She would “absolutely encourage everyone to carry Narcan.”

She shares not only her recovery journey with the man she once had to use naloxone to revive, but a son, too. After apologizing for a late response because she had to get their child in bed, she said simply, “There are no words to describe the vicious cycle and depression and everything else that comes with addiction.” But as for naloxone?

“Narcan is a miracle.” 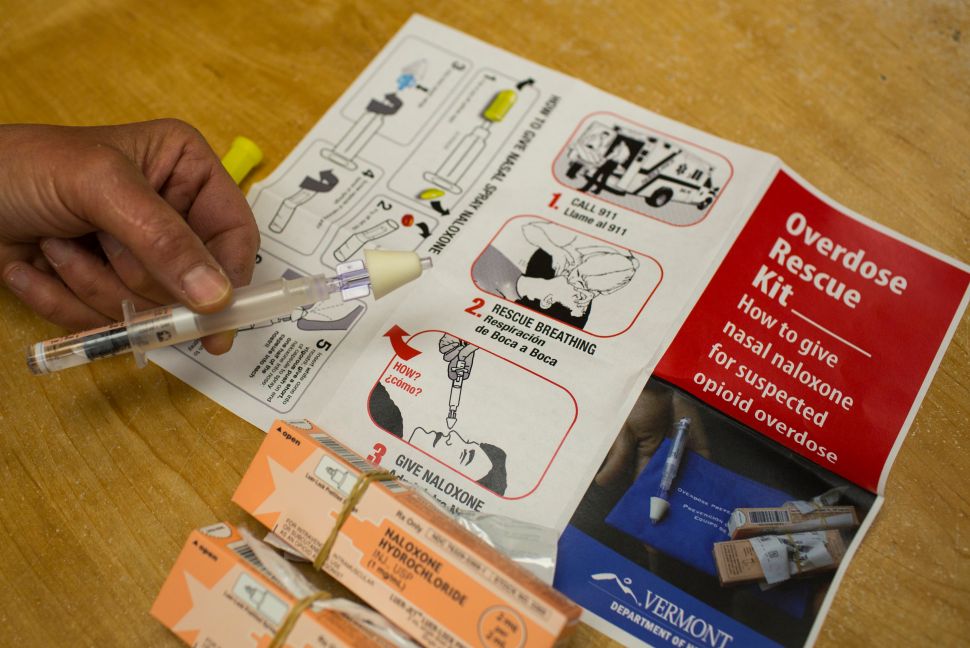