If you ask Jerico Mandybur, the author of Neo Tarot: A Fresh Approach To Self-Care, Healing And Empowerment, tarot isn’t just for psychics anymore. In her new book, Mandybur aims to make tarot accessible to the masses, presenting it as a form of self-care rather than a kind of shady, confusing mysticism.

“I’d like people who are intimidated by ‘inside baseball’ tarot offerings to feel included, and excited to discover a new self-care—if not spiritual practice,” Mandybur said recently in an interview with Cool Hunting.

Mandybur wears many hats beyond a self-described “boss witch.” She was the founding editorial director at Girlboss and hosts a podcast called Self Service through Girlboss Radio. She’s also a reiki healer and a legally ordained minister.

Beyond a simple tarot deck, Neo Tarot comes with a book explaining the meaning of each of the cards. The book begins with a manifesto, outlining Mandybur’s vision for tarot as a tool for self-care. “Tarot is available to everyone, it doesn’t discriminate and you don’t even have to ‘believe in it’ in a traditional divination sense in order to benefit from it. It’s kind of like self-directed therapy—a chance to slow down, a container in which to go deep, and a safe space in which to show up for yourself,” Mandybur writes. “Tarot is the blueprint, but you are the architect of your own life.” Far from a cultish future-telling medium for a chosen few, Mandybur’s tarot is about taking control of your own path. She gives examples of how the cards could be related to daily life in “Tarot Card of the Week” posts on her Instagram account.

Mandybur also sees tarot as a fundamentally queer medium, and part of her goal in creating Neo Tarot was to envision a tarot deck that was more inclusive of different races, genders and sexualities. “Being a Neo Tarot reader means never presuming anything about the identities or practices of your querent/yourself, never passing judgement and never participating in shady spiritual practices like cultural appropriation,” goes the manifesto. True to form, the cards accompanying the book break from “traditional” white heterosexual tarot drawings, instead featuring androgynous and multiracial people in soothing pastels drawn by Daiana Ruiz.

Neo Tarot comes at a time where divinatory practices are coming back into the mainstream. For example, horoscopes have moved from the back page of your mom’s Sunday newspaper to social media platforms, where accounts like @notallgeminis on Instagram and @poetastrolgers on Twitter bring astrological insights and humor to nearly half a million followers each on the daily—and let’s not forget Co-Star, the fast-growing app that won’t stop coming for your life via push notifications. Like Mandybur, the poets behind @poetastrologers have a Zodiac-related book coming out in November.

In honour of #NeoTarot coming out TOMORROW (in US/CAN) 💞I’m taking you on a lil tour of the book and deck. An unboxing, as the kids day. 🌹Peep your peepers inside on my IGTV now 🔮P.S. If you’re in Europe/Australia it’s out April 28. Hope you love

But tarot has always been more like astrology’s esoteric older sibling. Perhaps because of the physical reality of drawing cards from a deck, it never became ubiquitous the way horoscopes did in magazines across the world. As a self-professed astrology buff, I’ve always found tarot at best elusive and at most off-putting, generating images of silken tents at the edges of darkened fairgrounds.

Because of this, I was pleasantly surprised to find out just how un-hokey Mandybur’s book is. You don’t have to call yourself a witch and memorize the meanings of 78 cards to get into tarot. You can just draw one card, look up the meaning, and think about what that advice might illuminate about your own life. It isn’t about predicting the future; it’s just about taking a few minutes to take stock of your life and consider paths for moving forward from where you are. No one is trying to scare you with the Death card. Mandybur just wants you to take care of yourself. Consider this skeptic converted. 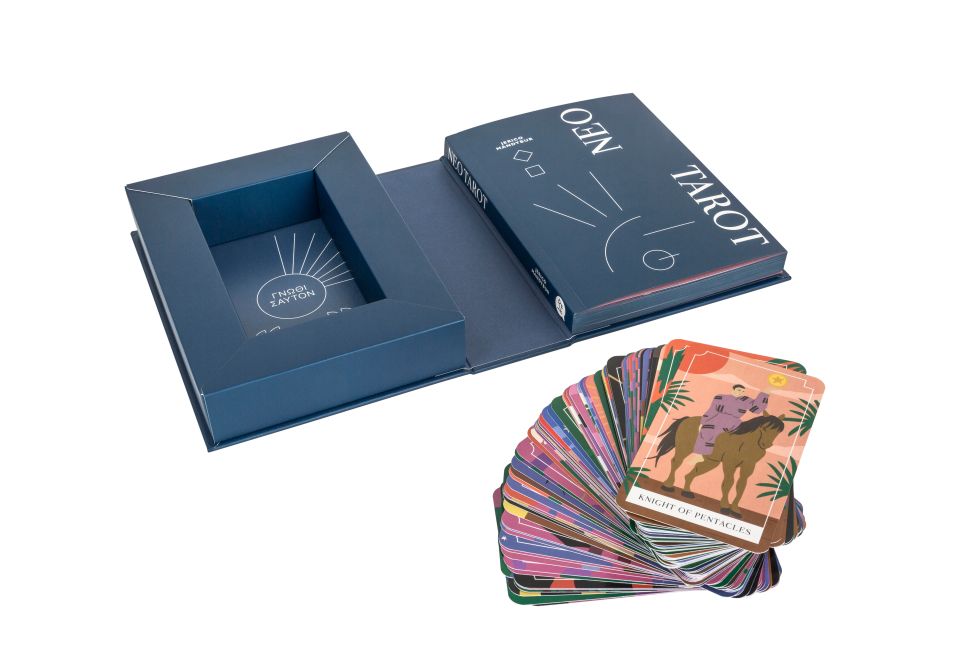