I missed the first weeks of City Ballet’s current season (I was catching the Notre Dame conflagration in Paris). The two performances I’ve managed to see since I got back ran the usual New York City Ballet gamut from awful to inspiring. Inspiring were the evolving artistry of Harrison Ball, a true classicist, in Valse-Fantaisie, and of Erica Pereira in the same ballet—it’s taken her a long time, but so what? Daniel Ulbricht continues on his path from firecracker to artist: he did honor to A Suite of Dances, a Jerome Robbins solo vehicle for Baryshnikov undermined by those cute Robbins signatures: a somersault here, a shrug there, and don’t forget that cartwheel—so appropriate to a Bach cello suite! Unity Phelan was a welcome presence in the first movement of Western Symphony. Megan Fairchild was pleasing in Balanchine’s Sonatine, even though she’s not quite French enough for Ravel’s ravishing music. Young Roman Mejia is simply a star—everybody knows it, including him. But maybe that’s a quality shared by all true naturals. He’s a blast of energy and technique—a Villella in the making.

As for the negatives, where to begin? There was the omnipresent Pam Tanowitz’s Bartók Ballet—so muddled, so ugly, so long. Bartók’s thorny Fifth String Quartet is unfortunate music for dance, the goldish, grayish costumes didn’t help, and the dancers—all of them nobly working away like mad—were irrelevant. They could have been any eleven dancers from the company, their anonymity heightened by the gloomy lighting (a City Ballet specialty).

The other new ballet was a throwaway by Justin Peck. Title: Bright. (It wasn’t.) Music: unattractive stuff from Mark Dancigers (Peck’s musical taste is beyond my understanding). Dance content: three couples in pretty costumes with lots of lifts and lyricism. Sara Mearns and Russell Janzen led the proceedings to no particular effect. Greatest virtue: Bright was short.

Then there was the worst performance of Balanchine’s Stravinsky Violin Concerto I’ve ever seen, and I’ve seen a lot of them. The first “Aria” was led by Mearns, whose compact body is exactly wrong for the strange contortions and exaggerations Balanchine summoned from Karen von Aroldingen, who was extraordinarily supple and acrobatic—her arched back was an astonishment, and her movement singularly unusual. This is not Mearns. She came to life in the final movement where she could be jaunty and relaxed—and relieved. (Her partner, the impressive young Aaron Sanz, actually had a conception of his role.) The second Aria was worse. No one has ever forgotten not just the dancing but the gorgeous vision of leonine Peter Martins with delicate Kay Mazzo. Lauren Lovette and Joseph Gordon were utterly pedestrian here—no contrast, no concept, no Stravinsky Violin Concerto.

Weirdest effect of the season to date: the small flat doohickey they stuck on Mearns’ head in the last movement of Western Symphony. Granted, Mearns has none of the qualities of the original, the great Tanaquil LeClercq—she can be funny but she can’t be witty, and she lacks elegance. That’s no reason, though, to rob her of the most famous headpiece in the Balanchine repertoire—that towering black confection with the tilted brim. This headpiece is as fundamental to Western as the mass fouettées of the finale. 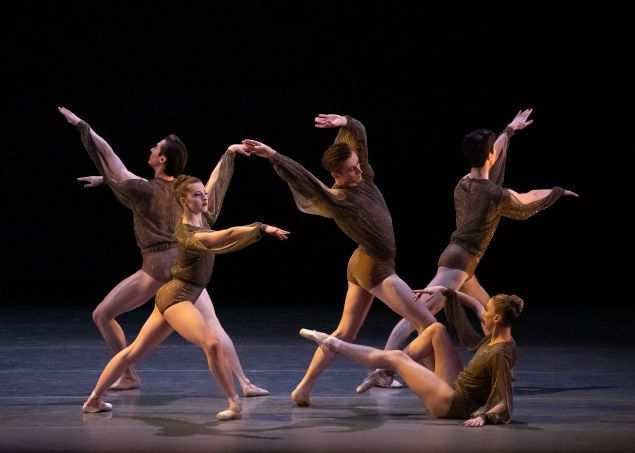 What made High Button Shoes a considerable Broadway hit back in 1947—it ran longer than Finian’s Rainbow and Brigadoon!—was the presence of Phil Silvers as the con man/charmer Harrison Floy, the radiant energy of Nanette Fabray (the turning point of her happy career), and Jerome Robbins’ brilliant Bathing Beauty Ballet, a tour de force of lunatic complexity as an endless stream of Beauties and Keystone Kops pop in and out of changing cabins on Atlantic City’s boardwalk. The rest of the show, as I remember it, was pretty terrible, something that the recent Encores! revival sadly confirmed.

The endless first act has no coherence, no charm, and lots of puerile jokes. It has one peppy song—“Papa, Won’t You Dance with Me?”—which makes for a brisk polka number that the City Center audience fell on with yelps of relief. (The song, by the way, became the late Doris Day’s first post-band singer hit.) And then there was something called the “Get Away Ballet”—a feeble Agnes de Mille rip-off choreographed by Sarah O’Gleby in the mode of de Mille’s famous “dream ballets.” De Mille and Robbins must have been revolving in their respective graves. The Jule Styne-Sammy Cahn score is derivative and second-rate. The Encores! performances were efficiently shticky—only Kevin Chamberlin as Floy’s rotund sidekick was three-dimensional. As for the Bathing Beauty Ballet itself, it lived up to its huge reputation, even though the stage of the City Center was too small for it: it looked reduced. But in the middle of the mess that is High Button Shoes, it shone with the light of genius.

Another disappointment: Mark Morris’s Pepperland, which washed up at BAM after an extended tour to mark the half-century of Sgt. Pepper’s Lonely Hearts Club Band. If only he had stuck to the Beatles. The music consists of some songs from the album, almost perversely chosen and hideously orchestrated by Morris’ frequent collaborator Ethan Iverson, plus some numbers by Iverson himself, also hideously orchestrated. You thought it couldn’t be done, but they’ve succeeded in draining the charm out of the Beatles! The company was bright and alluring, there were moments of interest (how not, considering Morris’ tremendous talent), but for me this was a dismaying event. I should have stayed in Paris.