Roseanne was supposed to be the big comedy breakout star of Trump’s America… and look how that turned out. So, why are there so few right-wing Republican comedians who can extend the comedic olive branch across both sides of the political aisle?

If you look at it, the last big mainstream conservative comedy stars were Larry the Cable Guy and Jeff Foxworthy. But now, with Trump in the White House, it’s a vastly different era from the innocent days of the 2000s. Socially, “you might be a redneck, if you ever cut your grass and found a car” has now evolved to “you might be a redneck, if you block the removal of the Robert E. Lee statue in your town square.”

So what’s the main foible that prevents conservative comedy from gaining a mass mainstream audience in this age of Trump? The late, great George Carlin took a liberal stance on social issues—and still could make a conservative audience laugh. Portlandia satirizes fanatical liberals, and we also laugh. But every time there’s a conservative version of The Daily Show launched, the show gets dropped faster than a flaming, hot tiki torch.

Is it the wrong choice of comedians, who fail to endear to the masses, who are doing conservative political comedy, or is it an inability for liberals to laugh at themselves, or is it something else?

Take right-wing comedian, Nick Di Paolo. He’s a comic who has been around for a while and released his new comedy special this week: A Breath of Fresh Air. If you recall, the promo photo got Twitter’s panties in a collective 280-character wad by featuring Di Paolo giving the finger to a group of young protesters comprised of women and people of color.

In the business, I guess, they call this the “edggggy” comedy.

It's here. Watch 'A Breath of Fresh Air' in its entirety for FREE. #BreathOfFreshAir #FreeSpeech https://t.co/itn39mDOFO pic.twitter.com/HjiK3ZhiYv

We see our president practicing this anti-theory of comedy all the time.

In her book A Conservative Walks Into a Bar: The Politics of Political Humor, political scientist Alison Dagnes wrote, “Conservatism supports institutions and satire aims to knock these institutions down a peg.” In the wake of such events as the Unite the Right rally in Charlottesville, where we’ve actually seen large groups of white men giving protesters of color the finger, the irony is sort of lost. Yes, it’s A Breath of Fresh Air—if the air is that of a 1938 German beer hall.

Or, perhaps I’m just being a sensitive snowflake libtard who can’t take a joke at the expense of people who lack power in this country.

So, why do so many conservative comedians face so many obstacles attempting to garner a mainstream following?

Well, let’s ask Nick Di Paolo and get his take.

“You know, I just think that when you’re a comic who leans right in your politics the way that I do, there are less media outlets who are willing to work with you,” theorized Di Paolo, whose humor, he considers too “dangerous” for Netflix and too “honest” for Comedy Central. “Some don’t agree with the politics and some are just afraid to take the risks that come with it. I mean, I do a show every day that mixes my comedy with my politics. If I tried to pitch that show to Comedy Central to air either before or after The Daily Show—I wouldn’t even be able to get a meeting.”

“And my show is every bit as funny,” he added with assurance.

Sure, comedy is subjective—and, of course, there is a target audience who will laugh along with Pepe the frog. Comedy is about making a connection with the audience and laughter is the reassurance of ideas. Trump, whose idea of humor is calling African countries “shitholes,” has a 90 percent approval rating with his supporters. At his rallies, he cracks zingy jokes after supporters yell for shooting immigrants at the border; Trump knows how to play his crowd. Di Paolo can skillfully deliver his material to his niche audience, and I’m almost positive there’s a plethora of people in Staten Island who would give him a standing ovation.

“I gotta say that there are still plenty of stand-up comedy clubs that support my kind of comedy,” said Di Paolo, whose setlist involves punching down at such topics as Black Lives Matter, members of the #MeToo movement, Muslims, immigrants, etc., all pegged to his theme that “there’s no respect for white European males anymore…” (Yikes!) That comedic battle cry could ring no truer to the ears of those who like to chant: “You will not replace us!” (Ironic sidenote: Italian immigrants who poured into America in the late 1800s and early 1900s were not considered “white” upon arrival.)

“There is a market for conservative humor as I believe half the country is being underserved when it comes to their ‘brand’ or ‘voice’ in entertainment,” said Chad Prather, a Republican comedian from Texas who has appeared on Fox News and CNN (and a man whose podcast I’ve actually been on, and though I don’t agree with him politically, I enjoyed our conservation).

In the same way that Trump reached out to the neglected people of the Rust Belt with the mantra that Washington didn’t care about them, conservative comedians feel the culture war is being extended to comedy audiences in those regions—who are also being neglected.

“Hollywood, the arts and the mainstream media is greatly comprised of those who consider themselves well left of center, politically,” explained Prather. “Conservative audiences are considered ignorant by the artistic elite and thus inconsequential.” Prather pointed out that Alec Baldwin recently referred to those outside of New York and Los Angeles as “fly-over Americans.” “If the audience is disregarded, then so is the performer that appeals to them,” Prather noted.

OK, so that explains why there’s a niche right-wing comedy audience in “fly-over” America, but why does this type of comedy have almost zero appeal to liberal audiences? Is it the inability of the left to laugh at one’s self?

“I consider ‘mocking’ to be part of the job description,” said Prather. “People have grown thin when it comes to having that searchlight turned on them. Personally, I believe that comedians should be, in an even greater way, self-deprecating first and foremost.”

Di Paolo, on the other hand, feels bigger forces are at play that prevents, what he calls “whining leftist maggots” from laughing at his material.

“In 2019, we have an entire group of people, most of whom are liberal, who are offended on behalf of someone else,” Di Paolo theorized. “This drives me crazy. If you find something funny or you don’t find something funny that’s fine, but don’t not laugh at something because you think it’s offensive to a third party.”

Well, again, some might just take this as punching down. But as Trump constantly proves at his off-the-rails rallies, there seems to be an audience for this. And if you look at the history of British comedy, there was the rise of the Northern Working Men’s Club circuit, which cemented the careers of such racist British comedians as Roy Chubby Brown, Bernard Manning and Jim Davidson—who actually garnered mainstream success. Roy Chubby Brown, who’s still performing to packed auditoriums, often opens his show by belittling the political correctness of the era  and then launches into a series of “Paki” jokes to huge uproarious National Front laughter. Certainly Roy Chubby Brown is giving his niche audience a Fresh Air treat they wouldn’t get from elitist leftist comedians in London.

“Guys like [Lenny] Bruce and [George] Carlin went to jail for their comedy,” said Prather. “They paved the way for the craft to be one of the main bastions of free speech,” he explained. “Yes, it’s subjective and no it may not be your ‘brand’ of comedy, but suck it up and appreciate it for what it is: independent self-expression. Stop being the comedy police.”

For Di Paolo, the backlash he’s gotten via Twitter will have no impact on his future shows.

You might remember Nick DiPaolo as the guy you wish died instead of Greg Giraldo.

“[Does] backlash make me change my material? Not at all,” said Di Paolo. “My comedy is honest. It’s the world the way I see it, and I’m not going change it for any audience. Never.”

These days, deep in the heart of Trump’s America, Di Paolo finds, “I can promote myself in [areas] where the audience is 100 percent fans of what I do. I’ve been saying the things I’ve been saying for 32 years, since I was an open-micer. I’m not gonna change now. It’s probably why I haven’t been asked to perform at the White House yet, although these days, who knows…?”

Maybe Di Paolo’s dream will become a reality. Would it be a tough crowd? Michelle Wolf proved at the 2018 White House Correspondents’ Dinner that this is an administration that can’t take a joke—or, at least has an acquired sense of whimsy and a president whose idea of humor is calling Mexicans rapists and locking children up in cages. 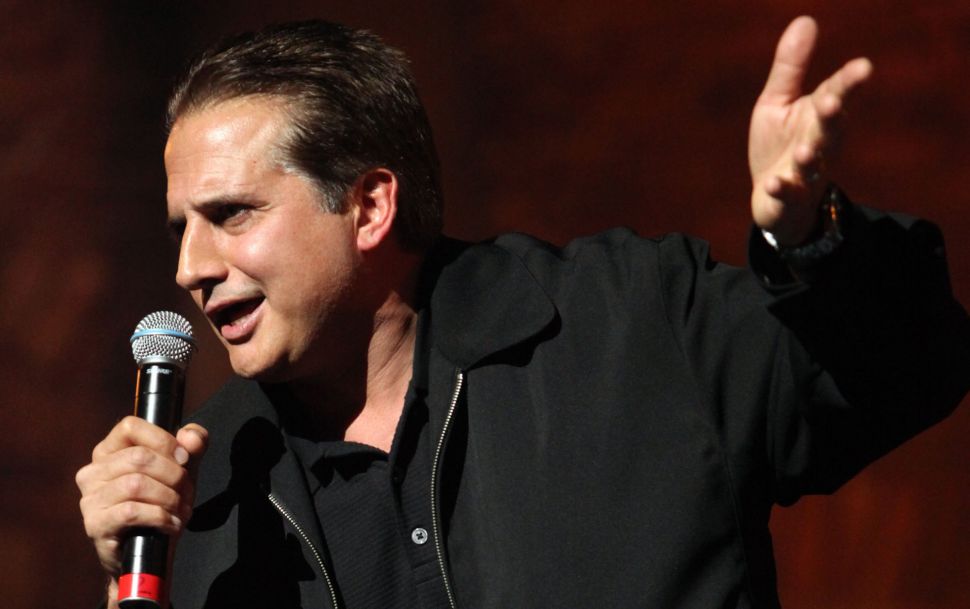