Anyone watching Nigel Farage on American TV is often be treated to the awkward moment when the host talks about the chances of him becoming the next British prime minister. They often use phrases like “some have suggested you might be the next PM,” but up until recently, the prospect was so unlikely that not even Farage was bombastic enough to sound enthusiastic about it.

But as Britain enters month two of being in the European Union after its scheduled departure date, the likelihood of Farage becoming prime minister is rising fast.

After the Brexit referendum, Farage retired as leader of the United Kingdom Independence Party (UKIP) and had intended to stand down as a member of the European Parliament. However, a few weeks ago, he founded the Brexit Party after it became clear that Britain would be forced to participate in the European elections on May 23.

Almost immediately the Brexit Party became a serious contender in the European polls. Over the weekend, the party became so dominant that it is now expected to get more than the Conservative and Labour Parties combined.

This is good news for the Brexit Party but is not as much of a game-changer as it first appears. Farage won the last European elections in 2014 with UKIP, but this did not translate into a single seat in the House of Commons during the general election the following year.

The most shocking aspect is that two general election polls over the weekend show the Brexit Party in second or third place, something that has never happened before. Election polling center Opinium put Nigel Farage’s Brexit Party at 21 percent to Theresa May’s Conservatives at 22 percent. Whereas, polling and market research company ComRes has Farage at 20 percent versus May’s 19 percent.

Both polls had the Labour Party comfortably ahead, with 27 and 28 percent respectively.

The Daily Telegraph, which commissioned the ComRes poll, estimates this would give Farage 49 seats out of 650 in the new House of Commons due to be elected in 2022. But perhaps more importantly, he’s been climbing in every poll every week and no-one really knows how high his numbers are going to go.

A total of 49 seats would be a phenomenal result for a brand new party in Britain, but there is no reason to believe this number will not be much larger by the time the UK votes on May 5, 2022.

The Conservatives are now in a panic over the rise of Farage, not least because its own members are taking to the airwaves to openly back him. The party did spectacularly badly in the local elections a few weeks ago, losing nearly 1,300 councillors, and that was without the Brexit Party on the ballot.

In the future, voters will have a choice between two conservative parties: the Brexit Party and the official Conservative Party.

A discredited Conservative Party could easily go the same way as its sister party, the Ulster Unionists. It lost all of its seats in the House of Commons after the referendum on the Northern Irish peace process to the Democratic Unionist Party, a party with similar policies but less baggage.

If the Conservatives cease to be the number one brand in British conservatism then the Brexit Party could replace it. And if that tipping point comes, the change over could happen quickly, with millions of voters and thousands of councillors switching sides.

Farage told us the Brexit referendum was an earthquake; it is hard to know how to extend that analogy to him becoming prime minister. Nonetheless, that is now a distinct possibility, and it is sending shockwaves through a terrified British political class. 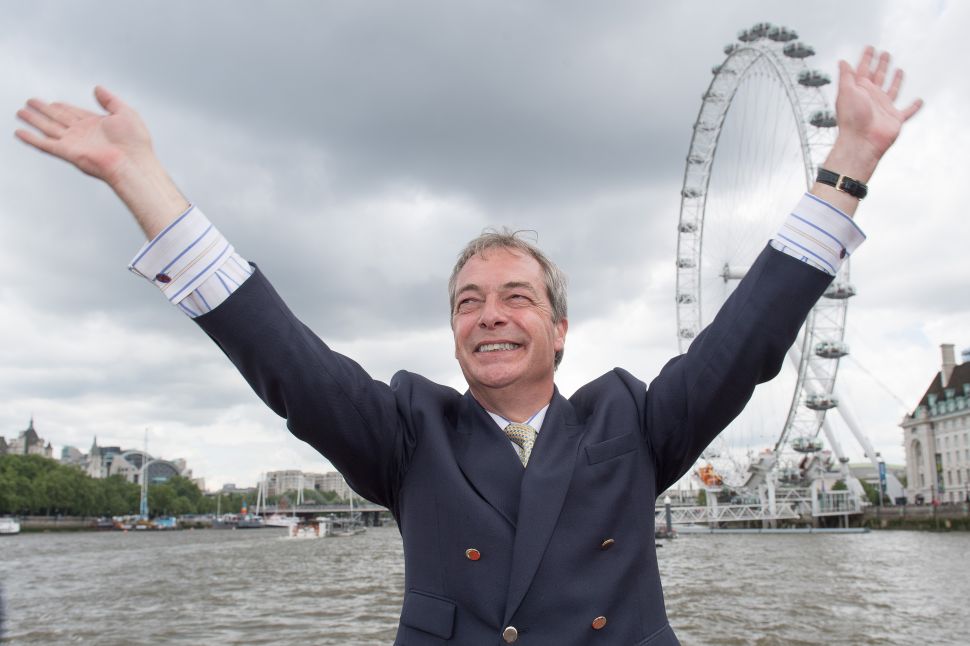