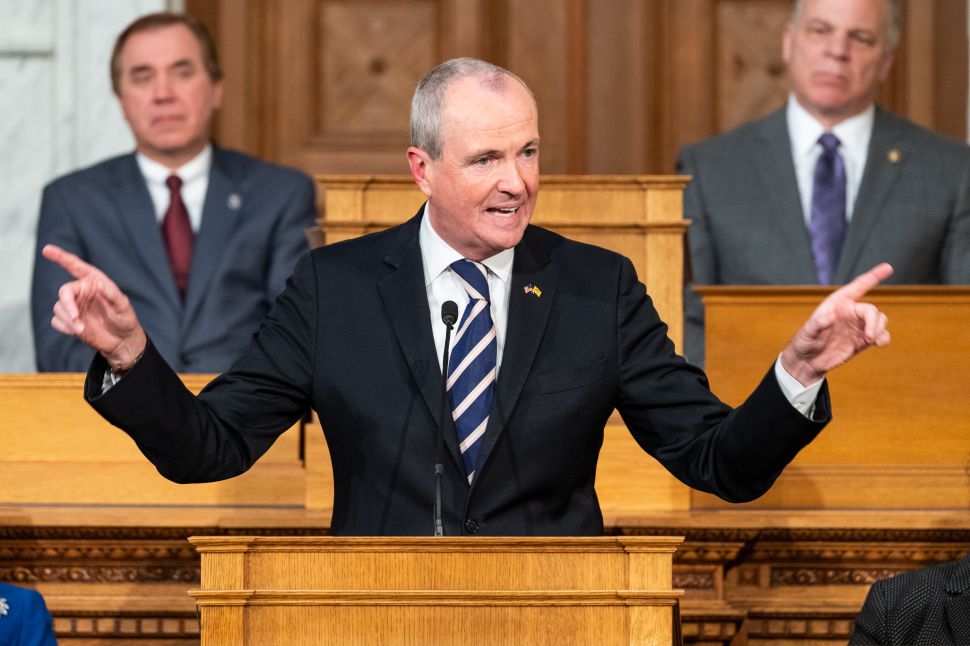 A bill that would have forced groups to reveal the names of “dark money” donors has been vetoed by Gov. Phil Murphy.

Murphy also deleted a provision in the bill which banned elected officials from running so-called independent expenditure groups. That measure would have applied to his own former campaign manager, Brendan Gill, who runs the group New Directions New Jersey, which supports Murphy’s agenda but refuses to disclose its donors.

Murphy claims to support forcing dark money groups to reveal their donors but has also appeared in the New Directions  New Jersey’s advertisements and will not say who is helping pay for them.

Quote of the Day: “No one wants to be here,” — An anonymous statehouse insider, bemoaning the atmosphere in Trenton as Gov. Phil Murphy and Senate President Steve Sweeney are engaged in a Democratic party civil war.

Murphy Targets Norcross in Veto of ‘Dark Money’ Bill
Gov. Phil Murphy has refused to sign legislation that would require “dark money” political organizations to disclose their donors, saying that the bill is full of loopholes and “falls short” of its transparency goal.
Politico Read more

NJ Expensive for First-Time Moms, Study Says
The average cost for childbirth and child care in the United States is a staggering $17,433 in the first year alone, according to moving industry researching firm Move.Org,
NJ101.5 Read more

State Plans to Add to Rainy Day Fund for First Time in a Decade
Strong tax returns from April will enable the state to deposit more than a quarter of a billion dollars into its rainy day fund this year, the first time in more than a decade that money has been added to the depleted account, Treasurer Elizabeth Maher Muoio said.
Politico Read more

NJ Will Relax Medical Marijuana Rules as Hopes for Legal Weed Fade
Beginning next week, the state Health Department will have new legal authority to expand the supply and demand for medical cannabis in New Jersey—a major priority for Gov. Phil Murphy’s administration as the effort to legalize recreational marijuana is looking unlikely to succeed this year.
NJ.com Read more

NJ Extends Statute of Limitations, Allows Child Sex Abuse Victims Much More Time to Sue
It will now be easier for New Jersey victims of sexual abuse to sue their attackers and seek damages from the institutions like churches that shielded the abuse.
The Record Read more

Legislative Hearings Into Tax Incentives Will Be Unlike ‘Slanted’ Task Force
As political tensions continue to rise over the future of New Jersey’s corporate tax incentive programs and the Murphy administration’s ongoing investigative task force, lawmakers say they will launch their own in-depth review of the state’s economic development policies and the Trenton-based agency that administers them.
NJSpotlight Read more

You’re About to See a Lot More Electric Scooters in New Jersey, Thanks to a New Law
Gov. Phil Murphy signed a bill Monday that could allow for the proliferation of electric scooters and bikes throughout New Jersey—a move deemed to be environmentally friendly but that has also made pedestrians and motorists want to pull their hair out in other parts of the country.
The Record Read more

State Ordered Chemical Companies to Pay for Pollution Clean-Up but Companies Refused
We won’t pay! That’s the message that a group of major chemical companies have in response to being ordered by the state of New Jersey to pay for the cleanup of what are known as “PFAS” chemicals.
NJ.com Read more

NJ Moves to Recruit More Men of Color as Teachers
On any single day, some 160,000 New Jersey public school students do not see even one teacher of color. The state is taking a small step toward trying to change that with a new program to recruit men of color into the profession.
NJSpotlight Read more

NJ Leads the Way One Year After Supreme Court Allows Sports Betting
No state has benefited more than New Jersey in the year since the U.S. Supreme Court overturned a federal ban on sports wagering.
Press of Atlantic City Read more

NJ Jobs: College Grads Find Rich Job Market, but Can They Afford to Live on Their Own?
With the economy booming and the demand intense for accounting students, Tiffany Monte had little trouble finding a full-time job. But her first steps into the real world for the soon-to-be graduate from Georgian Court University in Lakewood will feel awfully familiar.
Asbury Park Press Read more

Police Chief Says City Blamed Him for Plan to Cut Pay to Officers in the Military, and He’s Going to Sue
A Passaic County police chief has plans to sue the city after he was left with the blame for an unpopular plan that would force police officers also serving in the military to use vacation pay while training.
NJ.com Read more

Can Passaic’s Century-Old ‘100 Stairs’ Be Saved?
The city’s century-old “100 Stairs” (which is actually 103 steps) may soon be history.
The Record Read more