A week after Gov. Phil Murphy vetoed a bill strengthening disclosure requirements for contributions to “dark money” political groups, it was revealed that the state’s powerful teachers’ union contributed $2.5 million to a group pushing the pro-labor governor’s agenda.

New Directions New Jersey had refused to reveal who helped fund their work supporting the first-term Democratic governor. Murphy, who appeared in television advertisements paid for by New Directions as he fought with his fellow Democrats over the state budget, also never revealed the donor’s names.

But, as Politico reports, the donation was discovered by a longtime NJEA foe who came across information about the donation by reviewing minutes from union meetings.

The report comes a week after Murphy conditionally vetoed a bill that received overwhelming support in the state legislature. The governor’s office claims Murphy’s conditions will strengthen the bill. But critics say the governor insisted on conditions he knows will kill the reform measure.

Senate President Steve Sweeney, a Democrat that the NJEA has worked hard to try to unseat, has said the Democratic-controlled legislature might attempt to override the governor’s veto.

In a statement to Politico ahead of its report, the NJEA acknowledged it had made the contribution. New Directions, which reneged on an earlier pledge to reveal its donors and has steadfastly refused to do so, said in a statement once the donation was uncovered that it was “proud” to have received the NJEA’s support.

Quote of the Day: “I’m bothered the governor is so connected to a point where it really affects the decisions for the people of New Jersey,” — Senate President Steve Sweeney, sarcastically responding to news that the NJEA contributed $2.5 million to a dark money group supporting Gov. Phil Murphy’s agenda.

Why You Soon Might Pay More for NJ Utilities
Advocates are warning that a change to the way numbers are crunched for utility companies’ taxes could end up costing consumers a lot more.
NJ101.5 Read more

Plan to Stop Most Weed Arrests in NJ Just Advanced, but There’s a Lot More Work to Do
A plan to stop low-level marijuana arrests in New Jersey got a big boost on Monday, as an Assembly committee advanced the bill to the full chamber.
NJ.com Read more

NJ Medical Marijuana Program Could Be Expanded as Early as This Week
The New Jersey Legislature will soon vote on a major medical marijuana expansion plan after the bill advanced out of two committees on Monday, and lawmakers could vote as early as Thursday.
NJ.com Read more

Golden: Sweeney Has Elevated Himself to Level of Equality With Murphy
New Jersey’s millionaires and state employees can rest easy: When the fiscal 2019-2020 state budget is approved at the end of next month, it will not contain a tax increase on incomes exceeding $1 million and there will not be a government shutdown.
Asbury Park Press Read more

Libraries Must Wait for Access to Much-Needed Bond Funds
Eighteen months after New Jersey voters overwhelmingly approved spending $125 million to upgrade and modernize libraries, rules for distributing the money are still incomplete and local officials won’t get any money until early next year.
NJSpotlight Read more

Should New Jersey End Its High School Graduation Exam?
At one point, New Jersey was one of 27 states to tie graduation to passage of a high-school standardized test. It’s now one of only 11 with that requirement, and lawmakers are thinking about convening a study to decide whether to join the wave of states severing that connection.
NJ101.5 Read more

Fewer Young Girls Incarcerated in NJ
Just nine female minors are behind bars in the Garden State. That’s down from 25 in 2011.
As new findings suggest nationally, arrests and incarceration of young girls have been on a sharp decline in the Garden State as well. And it’s not because there are just fewer troublemakers these days.
NJ101.5 Read more

Murphy Reorganizes Press Team
Gov. Phil Murphy has promoted press secretary Dan Bryan to serve as a senior advisor for strategic communications to the governor and has named Alyana Alfaro Post to serve as press secretary.
The reshuffling of the front office communications shop shifts Bryan from day-to-day responsibilities of fielding reporters’ questions and into a top strategic post as Murphy approaches his mid-term election and more aggressively battles factions of the Democratic Party.
New Jersey Globe Read more

Huge Tax Hike Hitting Jersey Shore Town. Don’t Blame Us, New Elected Officials Say.
Belmar residents could be hit by yet another tsunami even after the borough is drained of the 100,000 shrimp and lobster lovers expected to flood this weekend’s annual seafood festival.
NJ.com Read more

Family of Former NJ Mayor Who Died After Collision With Sheriff’s Officer’s Car Files Suit
The family of a former mayor of a Gloucester County town killed in a crash with a sheriff’s officer is suing the officer and several county entities.
NJ.com Read more

Hoboken Council Scraps Hilton Hotel Deal
The City Council has scrapped a plan to build a Hilton Hotel along the Hoboken waterfront, and officials are working to draw up a new deal amid a lawsuit that challenges the legality of millions of dollars in community givebacks from the developer.
NJ.com Read more 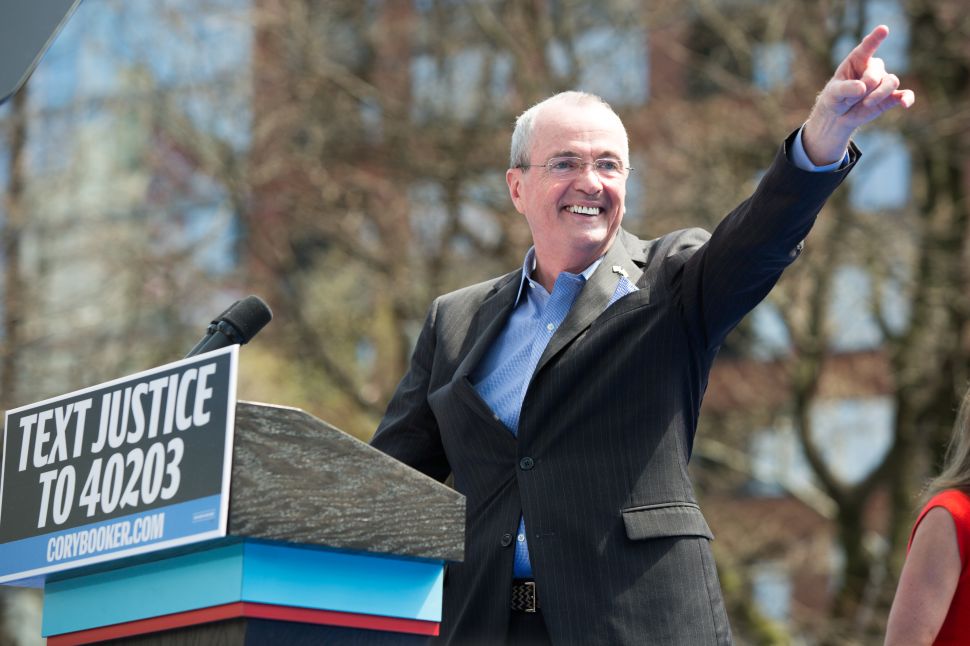