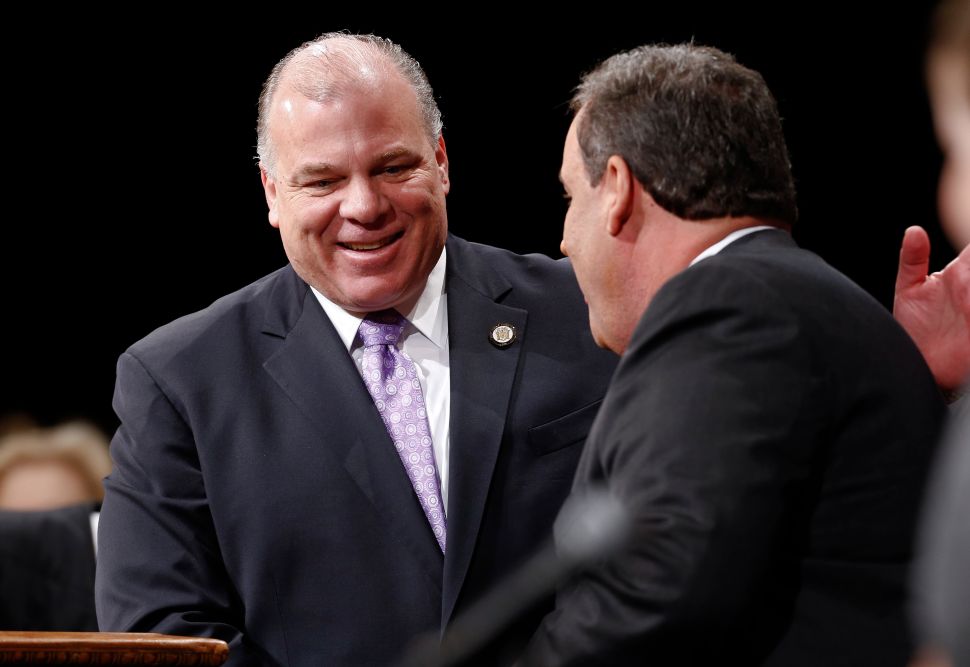 State Senate President Steve Sweeney through in the towel Wednesday on the efforts to legalize recreational use of marijuana.

Sweeney said voters will get to decide the question since he and Gov. Phil Murphy couldn’t muster enough votes among lawmakers to pass the plan, according to a report by Politico.

But voters won’t get to have their say until November 2020, since Sweeney isn’t confident the measure would pass during the upcoming 2019 election. This November, the entire state assembly is up for election, and Sweeney does not want legalization opponents to be able to use it as a campaign issue in an election that is unlikely to see high turnout by young voters who largely favor legalization. Sweeney instead wants the referendum to be held during a presidential election, when larger numbers of young people are likely to vote.

Sweeney’s decision to turn the question over to voters is a big defeat for Gov. Phil Murphy, who made legalizing marijuana a top policy of his administration. While Murphy and Sweeney, both Democrats, have been at loggerheads since Murphy took office, legalizing pot is one issue they both supported and originally worked together on.

Some legislators have grumbled that Murphy made it difficult to twist arms for approval of recreational marijuana use when he said he would expand medical use if the legalization efforts stalled, thereby removing a selling point that proponents could use on legislators who opposed legalizing recreational use but approved medical use.

Quote of the Day: “This is a magical time of year when deals get cut and things start to happen. If we have to get a budget done and a grand bargain is made, cannabis can be a part of that,” — Bill Caruso, co-founder of New Jersey United for Marijuana Reform, on the chances of legal recreational marijuana’s approval this year.

Legal Pot Bill Dead: New Jersey Lawmakers to Move Ahead With 2020 Referendum
New Jersey’s top lawmaker said Tuesday he was giving up on the effort to legalize recreational marijuana through the Legislature and would instead put the issue up for voters to decide next year.
Politico Read more

NJ Marijuana Legalization: Activists Already Preparing for 2020 Legal Weed Ballot Question
For advocates and opponents of New Jersey marijuana legalization, the announcement that the legal weed bill was essentially dead was cause for neither celebration nor mourning.
Asbury Park Press Read more

Analysis: Why Phil Murphy Has No Friends
It wasn’t supposed to be this way. After eight years of Republican Chris Christie, Democrats recaptured the governor’s office and gained complete control of state government. Already holding significant majorities in the state Senate and Assembly, the gubernatorial win should have ushered in a unified state government.
NJ101.5 Read more

Stile: Inside the NJ Feud Putting Legal Weed on Hold, Tax Breaks Up in the Air, and Derailing Reform
It loomed as a rare moment of reform in Trenton. The dominant Democrats, controlled for generations by party bosses and county chairmen, suddenly approved legislation in March requiring the shadowy “dark money” organizations to reveal their donors and how they spend their funds.
The Record Read more

NJ Law Would Force Governor, Top Lawmakers to Meet and Talk
Are New Jersey leaders communicating with each other and the public the way they should be?
Would it help if the governor and representatives from the Legislature were forced to sit down face-to-face every three months and discuss important issues? And then open their meeting up to members of the public and take questions?
NJ101.5 Read more

Camden Residents Blast Tax Incentives and Norcross
The Economic Development Authority board moved the public portion of its monthly meeting to the front of the agenda yesterday. It’s been several months now since the embattled authority has been able to enjoy its usual low-key gatherings.
NJSpotlight Read more

So, Chris Christie, Jon Corzine and a Democratic Power Broker Walk Into a Bar…
Add this one to the list of things New Jersey politicos didn’t seem coming.
NJ.com Read more

No Surprise: Newark Airport Ranked Worst in US, Better Than Only 16 Airports Worldwide
Amid collective gasps and the sound of prepackaged chicken cordon bleu crashing to the floor, it was announced that Newark Liberty International Airport is the worst airport in America, according to a study.
The Record Read more

NJ’s Mikie Sherrill and Other Female Veterans in Congress Band Together to Help Women in the Military
In the military, former Navy pilot Mikie Sherrill recalled, she learned the importance of working together. In Congress, she’s teaming up with her fellow female veterans.
NJ.com Read more

Asbury Park Could Be Latest NJ Town to Ban Plastic Bags
“Paper or plastic?” That question soon might be a thing of the past if environmental advocates get their way.
Asbury Park Press Read more

Not All Passport Holders Are ‘Male’ or ‘Female,’ Jersey and Other States Tell Trump
Authorities in New Jersey are jumping into a legal fight over the federal government’s requirement that anyone applying for a passport must check a box for “male” or “female.”
NJ.com Read more

Rutgers University Adjuncts Reach ‘Revolutionary’ Contract Deal
After a year of contract negotiations, the Rutgers University adjunct faculty union reached a tentative deal this week that includes pay raises of up to 33 percent over four years and multi-semester appointments for some longtime adjuncts.
The Record Read more

Shore Community Wants to Secede From Egg Harbor Township and Join Longport. But Does Longport Want Them?
When black ice coated the porch early one March, Joe Stewart’s wife slipped while getting the morning newspaper. He called 9-1-1 and within minutes an ambulance arrived at their home in Seaview Harbor, a tiny community on a Shore causeway.
Inquirer Read more

With Election Victory, North Bergen Mayor Continues His 28-Year Run
It was a blowout in North Bergen. For the eighth time in the last 30 years, voters in this northern-most Hudson County town voted to elect Nick Sacco to the mayoralty. He faced little difficulty—besting his opponent, Larry Wainstein, by some 4,000 votes.
Jersey Journal Read more