The wildly gifted composer-lyricist Dave Malloy likes his source material thick, baggy and potentially untamable: the Old English epic bloodbath Beowulf; a character-stuffed chunk of Tolstoy’s War and Peace; Melville’s encyclopedic fish fable Moby-Dick (excerpts at the Museum of Natural History July 26 and 27). His newest project is not, strictly speaking, literary. But it’s wordier and more structurally complex than any of those tomes: The Internet. More specifically, the inner and social lives of eight online addicts who meet in a church basement for a program where they find comfort in each other’s stories—and spiritual harmony singing a cappella hymns. Octet depicts one such gathering, a kind of glee club meets twelve-step, the whole thing shrouded in cultish mystery.

Octet began as a song cycle for eight voices (working solo and as chorus) and indeed, over the course of its 100-odd minutes each of the attendees gets their say, from warmly reassuring group facilitator Paula (Starr Busby) to fidgety, young first-timer Velma (Kuhoo Verma). Such an anthology approach can grow predictable or monotonous if the creative team doesn’t invest in each character equally, and change up their theatrical game, but Malloy and his shrewd director, Annie Tippe, find a smart, engaging balance between satiric realism and exuberant theatricality.

At first, group members unpack their hearts in familiar ways. Jessica (Margo Seibert) is recovering from public shaming after her “white woman goes crazy” video went viral and she became a social-media punch line. Next, gregarious and boyish Henry (Alex Gibson) details his debilitating fixation on Candy Crush in a rollicking pop-country foot-stomper. In one of the night’s most beautiful songs (there are many), Paula describes how she and her husband bring their phones to bed, “a stale, pale glow lighting up the sheets.” It’s a painful snapshot of marital loneliness, and Busby delivers it with devastating simplicity.

Malloy never settles on one musical idiom or rhythmic approach—each song wriggles around in different genres and time signatures, like an Internet surfer restlessly clicking through sites. In three hymns spaced out over the show, the group achieves something closer to a unified sound, and the blend of voices is sonic heaven, as they croon evocatively about forests, fields and a monster lurking in the woods (that would be our tweeting POTUS).

In the second half, we move into darker territory, as the chic, single Karly (Kim Blanck) and withdrawn, lonely Ed (Adam Bashian) duet on “Solo,” a song about the silly and scary aspects of online dating. The lyrics here brilliantly capture the exquisite agony of mediated desire: “I feel my body stretched between two cliffs / One side is fantasy / The other reality / I feel my fingers start to lose their grip / And I can’t hold on.” When Karly muses that her rejection of porn-addled, women-hating losers could lead to violence—“Am I pushing him somewhere darker? Radicalizing him? Like is this guy the next fucking manifesto mass murderer?”—sex comedy curdles into horror. For his part, Ed shyly cops to understanding the incel POV.

The already dense text starts to achieve data overload when Toby (Justin Gregory Lopez, scowling and hooded like a Mr. Robot stunt double) goes down a rabbit hole of QAnon conspiracy theories and ideological pissing matches with anti-authoritarian trolls. Then Marvin (J.D. Mollison), a neurochemist, spins a shaggy, surreal yarn about how he and a group of fellow scientists manically try to prove the existence of God, who manifested before them as a bratty 12-year-old girl.

By this point, Tippe’s staging and sound and lighting design (by Hidenori Nakajo and Christopher Bowser) have exploded the idea of a church basement, and we’ve entered something stranger and more wonderful than a critique of social media, an unthreatening tract about out-of-control screen time. Malloy, unafraid to let the show go pear-shaped, gets mystical-philosophical. He leads Marvin—and by extension the audience—into questioning our faith in human reason, which you could say the Internet epitomizes. That globe-spanning network is an amazing achievement of technology, ingenuity, and human consciousness, which has nevertheless drained joy and wonder from life, made us more hateful, stupid and impatient. Granted total control, the intellect will destroy the spirit; if all of human experience is contained in that doohickey in your back pocket, who needs the world?

Not only is Octet one of the most thought-provoking and soul-stirring musicals I’ve seen in ages, it has an ingeniously woven, harmonically lush score that you’ll want to revisit. Malloy’s melding of indie-rock, punk, electronica and a sort of medieval plainsong is ridiculously catchy (and his deft lyrics quite witty). He uses the voice for percussive and drone effects as much as for traditional harmonies; one of his inspirations was composer Caroline Shaw and her group Roomful of Teeth. That’s not the only influence. In a program insert Malloy says he borrowed from dozens of movies, books, podcasts, and games, not to mention Tarot, since every character is named after a card. In the end, as our motley pilgrims settle down for their closing tea ceremony, their cups laced with a “group psychedelic,” you’re suffused with a sense of liberation and respect for the roiling, primal unconscious that needs no Wi-Fi. All of Malloy’s messy inclusiveness, his aggressive hoarding of data, attitude, allusions, science and superstition…it’s very Internet, right? But instead of eyesore and brain-fog, my time with Octet made me feel more alive, more connected: Forget the iPhone; pass the Iowaska. 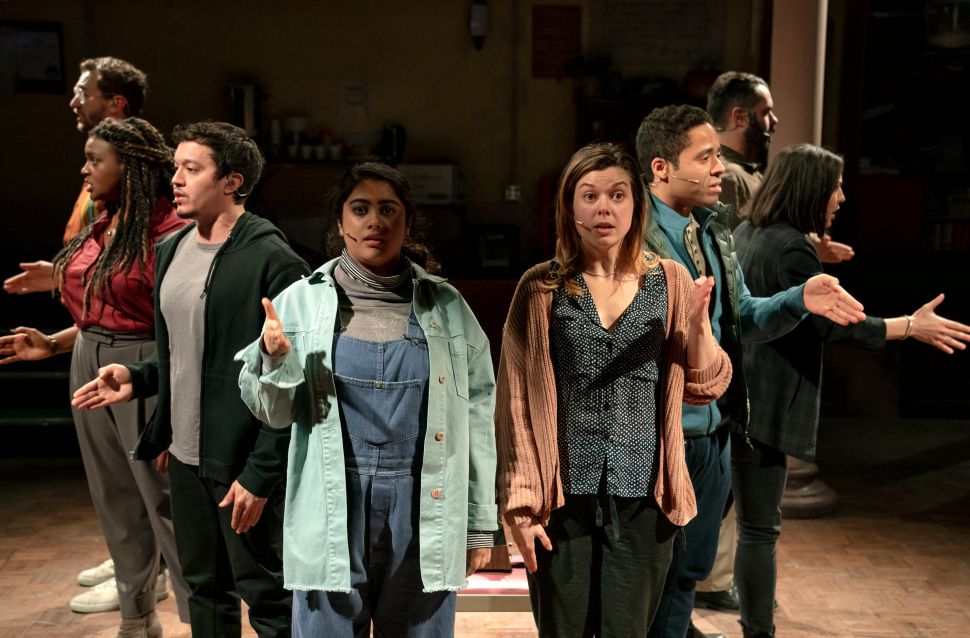