No one could be more enthusiastic for an environmentally-friendly car future than me. I long for the day when privately-owned combustion-engine human-driven vehicles become a social rarity. We must electrify or die. Even the thought of a simple boring Toyota Avalon Hybrid makes me happy.

That said, I still love off-roading. In seven years of this stupid car-reviewing side gig, I’ve driven through a frozen river in Iceland and crossed an abandoned railway trestle in Greece. I’ve rambled through the deserts of California and Arizona and wheeled up more than one sheer cliff face. And I cut my chops every year when I drive in the Texas Truck Rodeo. I didn’t learn to ride a bike until I was 16 and am about as much a Red Stater as Larry David. But I know how to hump a trail in a big rig.

The appeal of off-roading can be explained thus: it’s fun to drive over rocks and through mud. Anyone who disagrees is dead inside. And I’m hardly the only enthusiast.

Tens of millions of Americans count off-roading as a beloved hobby. Some of them practice dune-bashing in their All-Terrain Vehicles. Others love fording rivers. I’m most partial to dirt-tracking, driving through mud puddles and, especially, rock crawling.

Once upon a time, you needed to have an extremely specialized vehicle to off-road properly. After World War II, people began to use Jeeps for something other than delivering the Captain to the front lines, but otherwise a heavily-modified truck or Land Rover were requirements to even begin to attempt an off-road expedition. In 1977, a motorcycle won the first Paris-to-Dakar road rally, the world’s most famous off-road race. It took a decade before car manufacturers began seriously outfitting their cars for off-roading.

For decades, off-roading occurred in fun but dangerous three-wheel all-terrain vehicles, in ancient bone-rattling Land Rovers or in Jeeps. But somewhere around 10 years ago, it became an actual industry. These days, average-seeming consumer cars contain 4×4 capabilities that would have made them runaway winners in the early Dakar races. In February, Car & Driver did a comprehensive survey of the best off-road ready cars from major manufacturers. There were 34, including such bland-seeming options as the Lexus LX and Chevy Tahoe. Half the cars I see on the road in Texas are probably capable of pounding serious sand.

So when Ford called me up a few weeks ago and asked me what I wanted to drive, it wasn’t a tough choice. They had a Raptor, the world’s greatest off-road truck, in stock.

The current Raptor is the 2019 Ford F-150, except with a 450-horsepower twin-turbo V6 engine, Fox Racing dampers that automatically adapt to changing environments and a suspension that makes it virtually impossible to knock the truck off-balance. It has monster tires and is so wide that I found it almost impossible to park in ordinary spaces during the week.

But then came Sunday, and I decided to take my 16-year-old son, Elijah, out for a little off-road fun.

Breaking news, off-roading is bad for the environment. In fact, it sat at the center of the most extreme controversy of the recent government shutdown. Absent the watchful eye of rangers, idiots went off-roading in Joshua Tree National Park, destroying precious Joshua Trees in the process. Just because your car can drive anywhere doesn’t mean it should. However, like most extreme and unhealthy hobbies, off-roading is fine when it’s contained within a certain framework.

Whenever I get a hold of a Raptor, or a Jeep Wrangler Rubicon, I like to head out to a place called Hidden Falls Adventure Park, about an hour outside of Austin, near the town of Marble Falls. Hidden Falls comprises 2,100 acres of rough, varied, often poorly-marked terrain. Outfitters rent Jeeps and ATVs at the entrance, or you can bring in your own vehicle. There are shooting ranges up on a plateau, frighteningly near some campgrounds. You can rock-crawl and shoot wild boar in the same day, a Texas dream.

I paid 20 bucks because we got there after 2 p.m. I drove the Raptor into the park, and asked Elijah to navigate. Or as he put it, “We were driving all over the place and you asked me for directions and I couldn’t figure out where the hell we were going.”

“It was like the start of a rollercoaster almost, where you just go over all those little bumps,” Elijah describes of the start. That was before we got the the plateau. It sort of resembled a lava field. We bumbled a white Toyota 4-Runner so new it didn’t have license plates yet. Well, screw it, we had a Raptor! I crawled behind the 4-Runner for a bit and then swerved to the left.

What happened next, well, Elijah describes it best. “At one point, we go off this one edge that was bigger than we anticipated, and we just dropped. I was like ‘what the hell.’  We heard this huge thunk. I swore the car was broken. But it was completely fine.  We’re stuck on this plateau now, and the drop to get off it is like four feet. We were like, no car can do that.”

Elijah had been Snapchatting the whole thing, and his phone blew up with messages from a bunch of bros. “Dude, are you at Hidden Falls? I love that place.”

That’s what you get when you raise a kid in Texas. And we weren’t done yet.

Elijah: “We came down this kind of difficult-looking drop. Before I know it, the car is sideways. Like really sideways. My phone was charging, and it was hanging down between my legs and not the right direction it should have been. You were yelling at me, ’Jump out of the car! Jump out of the car! Save yourself!’ I was like, no. There was this really smooth rock to our right. And you started driving toward that. You managed to kind of get the car back up to the direction it should have been. Slowly, you got it back to being on four wheels instead of half of two of them.”

That Raptor was filthy as hell, but it didn’t have a scratch anywhere on it, pretty amazing considering that I’d just flung it down a mountain. What a vehicle, what a way to spend a beautiful Sunday in America, the land of the semi-free. And then I would return to driving around in my Prius.

You’d think, given environmental concerns, and given the coming self-driving electric car revolution, that off-roading would be an endangered activity. But then you’ve never been to Texas. People want to go where they’re not supposed to go. They want to be in a vehicle that’s fast, powerful and loud. No Tesla Supercharger network is going to change that. And no robot driver will change the fact that there are few thrills like driving a monster truck off a two-foot ledge. More and more cars will have off-roading capability in the coming years. The market demands ground clearance. Plus, new fans are being born every day. Elijah understands the appeal: “It was so fun, I definitely want to go again. It was like going on a rollercoaster, expect that someone you know is driving, and there’s a chance that you could die. Which makes it more fun.” 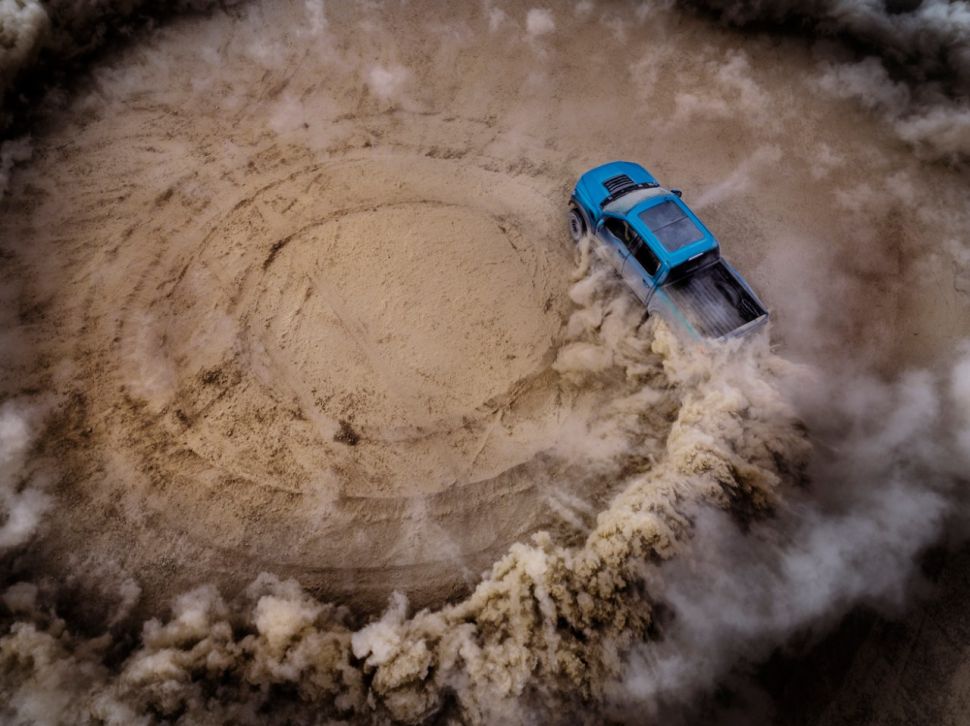