It’s always intriguing for me to see what Diane Keaton can do with silly material, and it doesn’t get any sillier (or more futile) than the fatuous Poms. Resourceful and ingratiating, the star knows her way around a camera. If only she could find where it is. This movie about senior citizens in a retirement community who come back to life as hobbling cheerleaders is filmed through so many soft-focus lenses that you’ll leave feeling desperately in need of Lasik.

Keaton is a particular weakness of mine, and I usually find her nervous mannerisms and stammering, naturalistic speech patterns a source of humorous charm. She is also no stranger to inferior material. But this is ridiculous. After 46 years in the same New York apartment, Martha Walker, a retired school teacher, is diagnosed with terminal cancer, so she dumps everything into an estate sale, packs up what’s left in her Subaru and drives all the way to a cookie-cutter Georgia home for the elderly called Sun Springs. It’s pristine but deadly.

Before she can even unpack, her noisy, obnoxious next-door neighbor—a cussing booze-guzzler named Sheryl (Jacki Weaver from Silver Linings Playbook)—barges in to inform her the best thing about the place is that someone is always dying, so there are plenty of wakes and funerals offering free smorgasbord buffets.

One contrived cliché about senior citizens follows another until Martha rallies eight grandmothers into forming a club for over-the-hill cheerleaders. So you get a cast of wasted women with bus passes including Rhea Perlman, Phyllis Somerville, Pam Grier and Celia Weston trying to invigorate the overlooked senior half of the Screen Actors Guild by proving there is still value in talent with Medicare benefits.

There is nothing wrong with any of them. It’s the witless script by Shane Atkinson and the petrified direction by Zara Hayes that lands everyone in traction. Older filmgoers who grouse about the surfeit of vulgarity crowding marquees these days will find Weaver’s patter about erections and chlamydia as delightful as Keaton does, but I found the sight of a team of cheerleaders waving gold poms with a rash of sore arms, knee replacements and sciatica about as funny as a colonoscopy.

There’s not much of a narrative thrust to the writing, and by the time the old-timers land in a serious dance-movement-cheerleader competition, the rabid enthusiasm and cheering ovations from the audience are not entirely convincing. It’s all as predictable as it is preposterous. Keaton knocks herself out trying to stay afloat, but when she starts clutching her stomach and passing out in pain in her cheerleading costume, you know her role is almost over, and so is Poms. 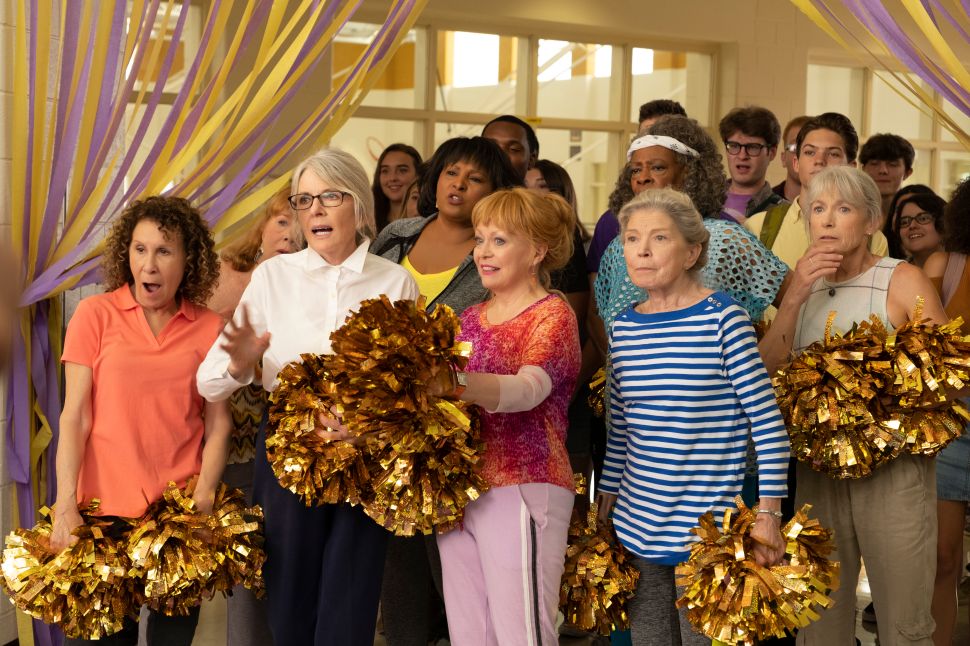