In 1927, Hollywood began to tap dance its way out of the Silent Era with the release of The Jazz Singer, widely considered the first musical movie, complete with spoken dialogue and a bevy of lyrical numbers. The film sparked foundational change across the industry, thrusting Hollywood and audiences into a new age of taste, culture and, more important, sound. “Talkies” began to dominate release schedules as every major motion picture studio scrambled to recreate the bombast of the stage for the silver screen.

This trend, refined and expanded with the development of filmmaking technology and techniques, carried on well into the 1960s, when four of the decade’s 10 Best Picture winners were musicals. A clear connection links the The Jazz Singer‘s Al Jolson to Footlight Parade‘s James Cagney and On the Town‘s Gene Kelly to The Sound of Music‘s Julie Andrews. However, as television continued to spread like the great suburban flight and the 1970s ushered in the era of the blockbuster with biggies like Jaws and Star Wars, the musical began to fall out of fashion with common moviegoers.

But as a certain sect of seafaring pirates from Game of Thrones loved to say, what is dead may never die.

Cineplexes are now dominated by superheroes and reboots, but the musical film seems to be on a comeback tour. Entries from this decade continue to defy expectations and draw crowds en masse. The 2012 film adaptation of Les Misérables earned more than $440 million worldwide (and a slew of Oscar nominations), while 2014’s Into the Woods more than quadrupled its production budget, raking in $213 million. Then we had La La Land (which pulled in $446 million), Beauty and the Beast ($1.3 billion), The Greatest Showman ($435 million), Mamma Mia! Here We Go Again ($395 million) and A Star Is Born ($434 million). Hell, Bohemian Rhapsody (which earned an astounding $903 million) just became the highest-grossing biopic in history largely thanks to its popular tunes. For the most part, these movies were all critically acclaimed hits that live and die by their musical numbers.

Of course, there are exceptions: Disney’s Mary Poppins Returns failed to drum up as much business as hoped, and everyone expected a lot more from Clint Eastwood’s Jersey Boys. But overall, the live-action musical movie has once again become a reliable and consistent lane for Hollywood—which bodes well for Rocketman.

Though it won’t do Bohemian Rhapsody numbers, it is the superior film in every conceivable way. It is far more fixated on the pain and trauma of its main subject, delving into the patterns he falls prey to and the self-loathing that drives his self-destructive behavior. The rough edges of his life aren’t sanded down for mass appeal. That may cap its box-office ceiling, but it also ensures a better product.

Director Dexter Fletcher, who was forced to take over Bohemian Rhapsody after director Bryan Singer’s untimely firing, takes creative liberties to paint a vivid, imaginative portrait that blends fact and dreamlike fiction. That illustrious off-center approach infuses some much-needed life into the typically stuffy biopic genre, even if the movie often mistakes showy belting and choreography for character development. Since the film often relies on selections from John’s oeuvre that weren’t made until years after the period they depict in the movie’s time line, some of the meaning can be lost in translation. But, frankly, you forget all that when you’re singing along in the moment.

Star Taron Egerton delivers career-best work here, mustering all the bluster and bravado (and crooning prowess) one expects from a secretly wounded pop star. And while Rocketman can become too engorged on its own spectacle, it’s still a blast-off of an experience that is equal parts rousing and moving.

The latest tracking numbers for the $40 millionish budgeted picture peg it for an opening of around $20 million. Admittedly, it’s up against some stiff competition in the form of Godzilla: King of the Monsters, Ma and Aladdin, now in its second week in theaters. But recent box-office history provides a track record of overachievers in the genre who’ve had surprisingly good legs. Considering that John has sold more than 300 million records worldwide, we’re inclined to offer a more generous prediction.

Rocketman is a mostly glorious, often thrilling throwback to the early days of Hollywood. Make no mistake: Watching it, you’ll remember when rock was young and you will have so much fun (Suzie not included). 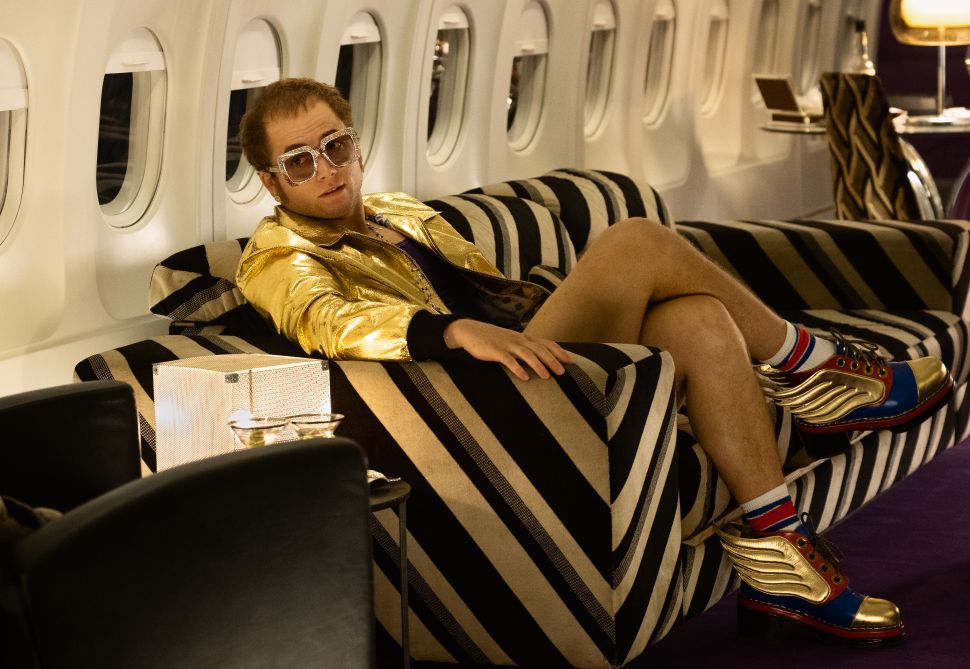