Competing bottles of hot sauce in deep reds and oranges line the shelves of supermarkets and gourmet shops. Amazon devotes more than 150 pages to hot sauces, from classics like Cholula to a multitude of artisanal brands with names like Colon Cleaner or Da Bomb Beyond Insanity.

Hossain had no professional experience in the food industry or consumer packaged goods. Gloved and masked, Hossain began making her peppery concoctions in her apartment kitchen, always using fresh peppers grown in New York and New Jersey. In 2016, while still perfecting the recipe, she began selling jars with scrappy labels at local outdoor markets.

Today, more than 120 stores in greater New York City sell her hot sauces, from the famous spice shop Kalustyan’s to neighborhood shops like Foragers and Westerly. The bright orange, life affirming, “super duper hot” habanero is the most popular of the three flavors. Silly Chilly will soon be for sale on the shelves of the renowned Light My Fire shop in Los Angeles’s historic Farmers Market.

When Hossain isn’t giving tastings, zig-zagging around the city following up with buyers, or traveling on selling tours, she can be found working from a brand new WeWork co-working space of blond wood, part of its Food Labs program, where Hossain was recently accepted.

While urban foodie types might fantasize about launching a business based on their jams, pickled beets, artisanal breads or funky ice cream flavors, very few attempt it, never mind succeed. Sitting in WeWork’s communal area on a minimalist felted sofa, Hossain, originally from Bangladesh, explains how she transitioned from a secure job in the fashion industry to a free wheeling hot sauce impresario.

Bangladeshi cuisine is quite spicy, is Silly Chilly based on a family recipe?
No. We use a lot of spices in Bangladeshi food, it’s spicy by default, so we never need hot sauce; it’s already flavorful. I never used hot sauce growing up.

Why did you launch a hot sauce business?
I used to spend a lot of time at the farmers markets on the weekends, Union Square, Hoboken and Jersey City. I noticed the peppers, “Oh, wow, they are so pretty and cute—so cute!” The colors, the shapes; I would just buy them.

Then, I’d come home and have all these peppers. As an experiment, I started making hot sauce and realized I was enjoying it.

You worked at the Gap in merchandizing at the time, were you miserable, a frustrated entrepreneur?
I liked the job, but I was unhappy inside because I wasn’t doing anything impactful. I actually never had the entrepreneurial spirit, I wanted to be in corporate and climb the ladder.

What made me passionate about launching Silly Chilly is the connection to the farmers. I had a vision that if Silly Chilly could grow, I could fund many farmers.

Had you become friends with pepper farmers at the markets?
Oh yeah! I built a relationship with Rutgers University Agriculture Farm; they grow a majority of my peppers right now. I work with Dr. [Albert] Ayeni, he managers the program, which has student farmers.

I also use other farmers. I pay them directly, whoever is touching the soil, watering the plants, harvesting, so there’s no middleman.

After experimenting in your kitchen, did you plan your next business steps?
I haven’t followed a traditional path. There wasn’t a business plan. I didn’t have a grand launch, it just happened, like falling in love with your best friend, you know?

What made you think Silly Chilly could be successful?
Validation from people. I used to force my co-workers [laughs] at the Gap to try it, also my aunt, uncle, roommate. I got validation from strangers (friends sometimes don’t want to hurt your feelings, so they say it’s good) at the markets.

What was your first big retail break?
I chased the owner of Chelsea Market Baskets, David [Porat], for three months to be in his store. I still remember when he left a voice message, “Sufia, yes, we’d like to have the product in our store.” I had a little tear in my eye, at that time we were probably in one store. He has been amazing to me.

Do you still walk into a store with samples and say, “If you like it, let me know,” and then follow up? How does it work?
We work with a buyer at the headquarters if it’s a chain store. If it’s an individual shop, you might see the buyer or owner. But, “let me know” doesn’t work, because they will never let you know. It’s more, “I’ll call you.” I also have clients like WeWork and my product is on W.B. Mason, one of the third largest business-to-business distributors.

How did you get Silly Chilly into so many stores in a few years?
It’s hustle, hard work and being genuine helps. I’m also good at smelling opportunities, meaning, if I smell that potentially something can happen, there’s an opportunity, I’ll jump in, work on it and follow up.

Have you sought any financing?
I’m bootstrapping it and I’ve taken out personal loans, which I am paying off right now. I’m small, but I’m profitable. I have grown, from 2017 to 2018, I think we grew the business over 500 percent.

In terms of revenue?
Yes, revenue. I’m very focused on selling and putting that money back into the company to scale up, versus raising funds from VCs. I’d rather do what I’m doing now—hustling, I’m never in one place—versus raising tons of funds.

I am looking for the right investor, someone who will support the mission. As my mom says, “Be careful what kind of hand you welcome into your home, that hand can put food on your table or mess up the whole apartment.” [laughs]

Maybe you don’t need venture capital investment.
It helps. There are certain marketing things I want to do, and I can’t because I don’t have the funds. I could grow the company a lot right now, a lot!

Is there anything about being an immigrant from Bangladesh that impacts Silly Chilly?
I could never do what I’m doing in Bangladesh, I’m so grateful to be here. In the U.S., even if you don’t have the biggest funds, you can still do things. But back home, it’s not that easy unless you have a lot of connections and money.

I immigrated with my parents when I was 12 years old, we lived in Jamaica, Queens. There’s a big Bangladeshi community in Jamaica now, people don’t go to Jackson Heights anymore; Jamaica has better restaurants and grocery stores.

But in terms of the Bangladeshi community and Silly Chilly, well, I don’t have a lot of positive things to say. When I did my Kickstarter crowdfunding campaign, many Bangladeshi friends said they didn’t have the funds or gave me excuses. I’m sorry, but it was freaking $40, these people live the New York City life, they go out for dinners, drinks.

One or two cousins were very supportive. I’m going to write an article one day: if you want to detox your surroundings and find out who your friends are, run a crowdfunding campaign.

What is in the future for Silly Chilly?
I have 40,000 units in the warehouse, I’m going to sell them this year. We are projecting 300 percent growth from last year.

I’m launching an initiative with global farmers to produce unique hot sauces with their peppers. The first country I’ll be working with is Bangladesh. Although I was born there, I don’t have any connections, so I’ll visit some villages and find one farmer.

The hot sauce will be manufactured here, we’ll see how the market reacts. Eventually, I want to produce locally so we can give back to their community, create jobs; that’s my long-term vision. 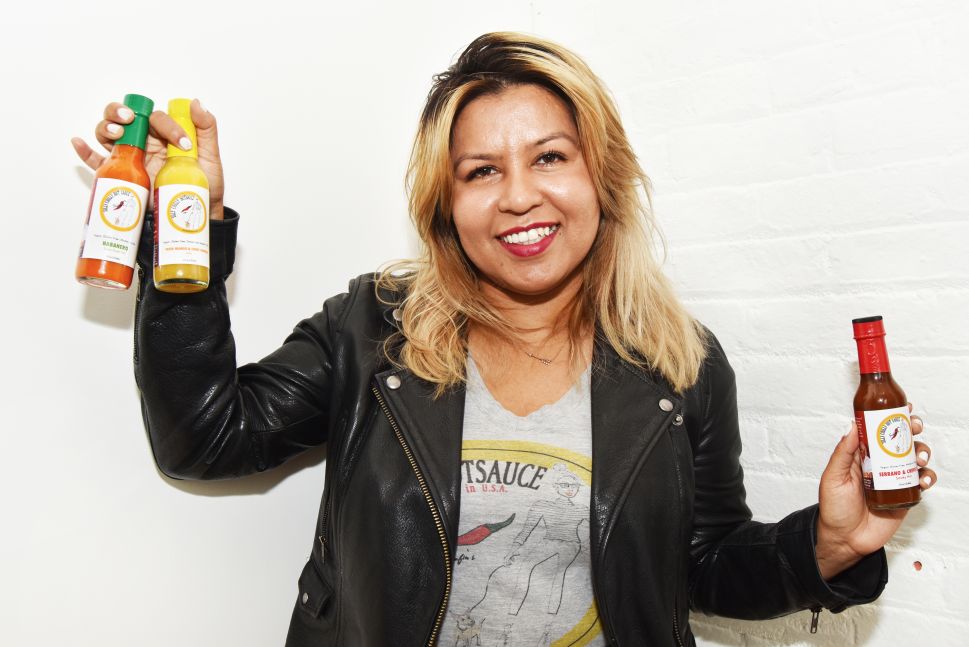