After its wildly successful Hilma af Klint retrospective, the Guggenheim is ringing in the 60th Anniversary of its Frank Lloyd Wright-designed building with an unusual display of its extensive modern and contemporary holdings. Unlike most permanent collection surveys, “Artistic License: Six Takes on the Guggenheim Collection” puts a group of unusual curators at the helm: six contemporary artists, each of whom have had a solo show at the museum. They each have populate one of the six ramps in the museum’s rotunda with their individual curatorial takes on the Guggenheim’s collection. The challenge? The artist-curators can only select works from the turn of the century up until 1980, causing them to ponder certain gaps in the collection and inherent biases within the art-historical canon. The exhibition, which opened on Friday, May 24, marks the first artist-curated show ever mounted at the museum.

The six selected artists include Cai Guo-Qiang, Paul Chan, Jenny Holzer, Julie Mehretu, Richard Prince and Carrie Mae Weems, each of whom have played a pivotal role in shaping the museum’s (and the nation’s) contemporary visual identity. Their staggeringly different approaches to collecting range from formal to thematic concerns but all in the end highlight the subjectivity of taste-making and the racial and gendered biases that go into upholding the Western art-historical canon.

Take, for example, Jenny Holzer. The year she presented her solo show at the Guggenheim, in 1989, she was also the first woman selected to represent the U.S. at the Venice Biennale. Among traditional-minded critics, her choice garnered controversy—the indiscriminate uses of language and mass media with which her works operated were seen as banal, the opposite of high art. Today, Holzer’s “Truisms” are the mantra of an online era, and, on the rare occasion of her work being criticized, it is for being too familiar. Holzer’s presentation on the Guggenheim’s Rotunda Level 6, “Good Artists” is a continuation of her career-long pursuit to expose the ways in which meaning and biases are created in our patriarchal, consumer-oriented society. By selecting works made exclusively by female artists, among them Louise Nevelson’s wall sculpture “Luminous Zag: Night” (1971) and Adrian Piper’s performative self-portrait “The Mythic Being: Smoke” (1974), Holzer’s selections illuminate the ways women have been excluded from the art-historical canon and how gender disparity continues to plague the art world.

Carrie Mae Weems, whose work has similarly been instrumental in addressing inequality within art history, uses her curatorial invitation to expose inherent biases in the museum collection, particularly its adherence to the Western canon. When her meditations on race, gender, and class found an unlikely home at the Guggenheim in 2014 (she was the first African-American woman to have a retrospective at the museum), many worried that Weems was being pigeonholed as a Black Artist rather than placed in dialogue with her contemporaries. In the last decade, her canonical photographs and short films have gone a long way in resetting our expectations of visual culture and challenging our assumptions about beauty and desire, particularly around female subjects. By focusing strictly on black-and-white palettes across different decades, mediums, and genres (one such piece includes Ana Mendieta’s “Silueta Series” from 1973), Weems uses her presentation on the Rotunda Level 5, “What Could Have Been,” as a conduit to challenge the historical exclusion and marginalization of racial minorities from museum collections.

One level below, on Rotunda Level 4, a selection curated by Richard Prince underscores the subjectivity of how taste is formed and the biases that go into defining something as “good art.” His 2007-2008 solo show at the museum, “Richard Prince: Spiritual America,” was a jab at cookie-cutter collector taste and distinctions between high and low culture. It defined the nation’s culture as a series of weird, fragmented subcultures that spanned from twentieth-century painting to pulp imagery and stand-up comedy. A decade later proves that we are no closer to having a coherent visual culture, but in his selection of works, “Four Paintings Looking Right,” Prince investigates how uncannily similar the formal qualities of the museum’s holdings of painting and sculpture from the 1940s and 1950s are—maybe indicative of us being closer to a more democratic understanding of taste today than we were several decades ago.

Contributions by two of the other invited artists are less easily decipherable. Julie Mehretu was widely praised in 2010 for her “Grey Area” show at the Guggenheim, a version of a Deutsche Bank-sponsored exhibition brought from the Guggenheim Berlin. The series of paintings in “Grey Area” on the surface reveal Mehretu’s attempt to define Berlin’s every-changing cityscape, one defined by both its historic scars and its contemporary makeup. On a deeper level, they also conjure other sites of drastic transformation and displacement, perhaps those closer to home. In her return to the Guggenheim as a curator, Mehretu again refuses to give us the answers to visual complexities, instead providing us with a system with which to navigate them. “Cry Gold and See Black” on Rotunda Level 4 reflects on how trauma, displacement, and anxiety in the years after World War II found expression in a wide range of art, from Francis Bacon’s Three Studies for a Crucifixion, 1962, to David Hammons’s body print Close Your Eyes and See, 1969.

In a New York Times review, Roberta Smith described Cai Guo-Qiang’s work as “crowd-pleasing, easily deciphered if not terribly original art.” The Guggenheim’s 2008 retrospective of the Chinese artist was action-packed with his now highly recognizable gunpowder installations and drawings. For his curatorial take on the Guggenheim’s collection, Cai instead opted to showcase “unbranded” works by renowned artists. “Non-Brand 非品牌” at the museum’s High Gallery and Rotunda Level 1 juxtaposes early figurative painting and works on paper by artists known for their abstract of conceptual pieces with new gunpowder works the artist created in his own trademark style—a comment on the complicity of artists, curators and museums in the branding of artists for the purpose of glossy institutional packaging.

Finally, there is Paul Chan, who, of the six selected artists is the one to most recently have had a solo exhibition at the museum with his allocation of the prestigious Hugo Boss Prize in 2014. Chan, whose art and activism have been intertwined for the most part of his career, let politics take a back seat in his 2015 solo exhibition to focus on the notion of the moving image. For his current curatorial venture at the museum, Chan found himself gravitating towards works that revolved around bathing, including Laurie Simmons’ tiny bathroom scenes from the 1970s and Fernand Léger’s late painting Starfish (1942). Politics haven’t disappeared from the artist’s practice here either: and all its restorative powers function as a possible source of renewal (maybe even pleasure, too) to survive today’s extremely trying political climate. 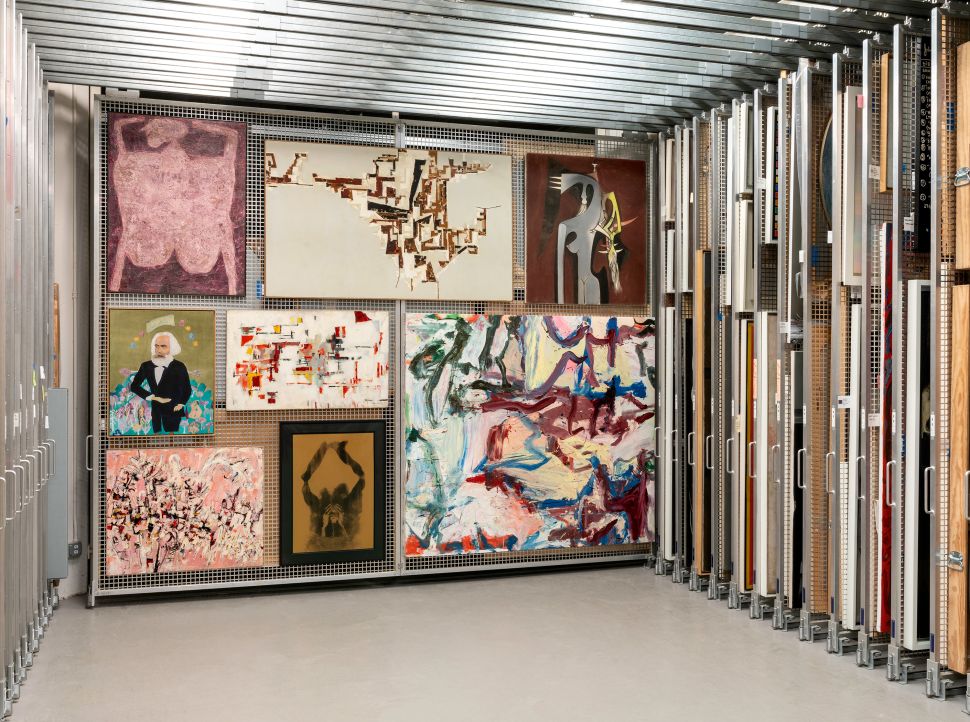