Flying is stressful: crowded security lines, delays, cancelations. With takeoff finally comes relief, usually in the form of a bottle and a plastic cup. But if once upon a time your airline alcohol options were limited, the future looks much, much brighter. More and more carriers are presenting passengers with a wider selection of top-shelf wines: big-bodied cabernets, structured pinots, elegant Burgundies. Some are even going so far as to send certified sommeliers up into the sky to pour them. From routes to Australia and Alaska—and everywhere in between—we’re witnessing a new era of in-flight viticulture.

In the first-class cabin, the relative quality of wine service can be a tremendous value add. For some flyers, this alone determines loyalty to one airline carrier over another. “I could never fly American,” says Mike McGrath, a New York–based NBC production manager and business traveler. “In my experience, they just don’t take wine as seriously as Delta does.”

That’s partly because the Atlanta-based carrier has been working with master somm and television personality Andrea Robinson for more than seven years. According to Delta’s website, its Master Sommelier selects from more than 1,300 wines from across the globe, “using the fine-tuned palate required to match the on-board environment.”

To stay competitive, American Airlines recently revamped its program, bringing in a Master Somm of their own, James Beard Award winner and prominent restaurateur Bobby Stuckey. Now you can find estate cabernet from Napa Valley on its domestic routes as well as acclaimed Châteauneuf-du-Pape on flights into Europe.

In fact, it has slowly become industry standard to feature an emboldened name at the top of business-class wine lists. Rather than combining a haphazard collection of bottles, airlines are tasking curation to the specialists—and they want you to know about it. For its newly launched Polaris Business Class, United Airlines tapped Doug Frost, one of only four people in the world to hold the Master Sommelier and Master of Wine titles. His selections are bespoke, tailored to the respective route of travel. A flight to New Zealand, for example, will carry that country’s characteristically crisp sauvignon blanc, whereas a flight to South America is more likely to stock the region’s rounder and more robust malbecs and tannats.

Qantas pushes provenance a step further, serving only wines from the carrier’s home base of Australia. Every year, over four days, celebrity chef Neil Perry heads up a team of 16 elite palates, including two of the country’s six Master Sommeliers. They taste blindly through 1,600 wines, eventually whittling their selections down to 250 different labels from 150 separate producers.

On board, the flight attendants offer more than just the wine—they pour a solid serving of knowledge to go along with it. The Qantas Sommeliers in the Sky program consists of a cabin staff of just over 300, dispersed randomly amongst the airline’s global route map. To earn entry, crew members sign up for three days of immersive training. Their studies conclude with an all-day exam incorporating 80 questions about regions; technical skills related to nosing, tasting and the winemaking process; blind tastings; and a practical skills test. Investing more than $25 million in the Australian wine industry every year, Qantas is the third-largest purchaser of wine in Australia; their buys include Penfolds Reserve Bin 15A Chardonnay 2015 and Seppeltsfield Paramount Rare Tokay.

Ultimately, attendants will be well versed in what red goes best with the short rib or what white complements the seared barramundi. But at 35,000 feet, pairing suggestions aren’t the only challenge they must consider. Stewardship and storage of product in close quarters is of constant concern. They must also tend to the factors that alter our perception of taste while riding seven miles above the ground.

Hydration is also key. “Our crew continually offers throughout the flight, so a customer’s palate shouldn’t be impacted in terms of tasting the wines at their best,” says Perry of the Qantas experience. “There’s also been a lot of improvement on the humidity and air quality on newer aircrafts like our Boeing 787-9 Dreamliner. So whether it’s food or wine, my rule of thumb is that if something tastes good on the ground, then it will taste good in the air.”

While this degree of thoughtfulness has slowly become the norm in first and business class, some airlines aren’t content to let the well-heeled hoard it all for themselves. Air France is democratizing premium consumption across all cabins.

“In business and La Première [first], we offer wines from the most renowned French wine appellations—Bordeaux, Burgundy, Loire Valley, Champagne,” says Paolo Basso, a professor at Worldsom Sommelier Academy in Bordeaux who consults with the airline. “But in economy class we have IGP [Indication Géographique Protégée] wines that display varietals. In this case, we pay special attention to our selection, and I make a blend together with supplier oenologists to find the best customized profile for the passengers.” These wines are complimentary on international flights.

Air New Zealand is even bringing its on-board selections to the ground. The brand’s online retail store encourages passengers to indulge their passion for New Zealand wine by building mixed cases from the dozens of wines served in flight. They’re available for worldwide delivery, and you can even redeem your airline points for purchase.

These efforts to take the airline experience to the next level aren’t going unnoticed. At the beginning of March, London held Cellars in the Sky, an annual awards ceremony hosted by Business Traveller to honor the best in-flight wine programs. Meanwhile, with flights from Boeing and Airbus sparking a race among the major carriers to offer the longest flight in the world (with some flight times extending past 15 hours), airlines are turning to high-end wine programs and educated servers to keep passengers entertained and satiated.

To many American travelers exploring New Zealand for the first time, or any part of the world, a plane can provide meaningful exposure to that country’s wine scene. In this sense, flight attendants are no longer just serving the drinks—they’ve become viticultural ambassadors for their native regions. So as you raise your altitude, be prepared to do the same with your expectations. In an increasingly competitive industry, airlines will continue to push each other to find more enticing labels and quirkier service perks. For globe-trotting wine lovers, it seems the sky is no longer the limit. 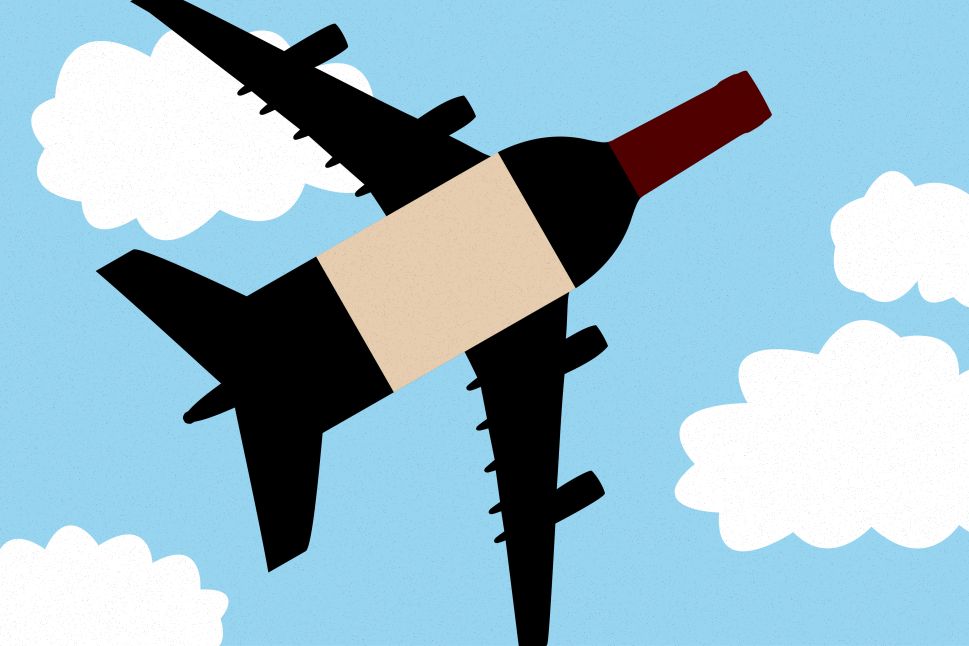