For those getting hit with art fair fatigue in the midst of Frieze week, TEFAF New York Spring might offer an intriguing respite. In addition to a tightly curated selection of modern and contemporary art and design, the fair holds a treasure trove of jewelry, antiquities and ethnographic art.

At Thursday’s VIP preview visitors made their way through the Dutch fair while taking part in its luxurious trademark traditions of sipping champagne and shooting oysters.

Held at the Park Avenue Armory and now in its third edition, this year TEFAF features 92 high-caliber galleries with 12 newcomers—some of which have migrated after showing at Frieze in years prior.

An overwhelming trend at this year’s fair seems to be single-artist presentations with blue-chip galleries focusing on the legacy of leading Modern masters.

Timed nicely with the 100th anniversary of the Bauhaus, David Zwirner presents small-scale works by the pioneering German modernist Paul Klee. Zwirner recently became the first commercial gallery to represent the artist’s estate and this debut of his work is just a taste of what’s to come in their upcoming fall exhibition. Additionally, Friedman Benda looks back on the profound impact of designer Wendell Castle, spotlighting the unconventionally innovative pieces that are rarely shown outside of museums. Celebrating the famed Diaghilev Ballet Russes, Galerie Gmurzynska helps set the scene for the fair with Natalia Goncharova’s 1914 large-scale Le Coq d’Or painting, which hangs over the aisles behind TEFAF’s trademark tulips.

That’s not to say the fair the lacks a contemporary edge. Securing one of the Armory’s historic rooms, Lehmann Maupin is featuring new paintings and sculptures by Hernan Bas, who specifically created the work in response to the room’s historic architecture and interiors. Taxidermy-like flamingos—a spirit animal of sorts and signature motif for the artist—lay dead on lavish antiquated rugs. His figurative portraits take cues from old world imagery—some are accompanied by gloomy florals. All together, Bas has created an environment of dark romanticism.

Pace Gallery made their TEFAF debut with a booth dedicated to Art Brut pioneer Jean Dubuffet, showing a range of work from the 1960s-1970s. These were complemented by Dubuffet’s live performance piece Coucou Bazar, in which his paintings, quite literally, come to life. For viewers who weren’t lucky enough to catch a dancing Dubuffet character, the booth features a video of the performance, filmed in Turin in 1978.

In an upstairs room, Milan-based gallery Nilufar showcases a refined synthesis of vintage and contemporary design. The bold assortment of colors and textures is a feast for the eyes, with pieces that span the past century. Designer Roberto Baciocchi puts an eccentric twist on classic Renaissance furniture: upholstering them in lavender velvet. Another unique find is a set of three abstracted “Pavonesse,” or peacock, sculptures made by Gio Ponti in 1960.

Galerie Bernard Dulon, a gallery specializing in the art of ancient tribal communities, featured a horned war helmet of the Senufo people of Côte d’Ivoire. Swiss Gallery Cahn International also had a museum-worthy presentation of Ancient sculpture. One Cypro-Archaic head from 7th to early 6th Century B.C. once belonged to the Met. Another small statuette of a bull—a symbolic animal commonly portrayed in the art of the late Minoan period—dated back to 1600-1450 B.C.

With visitors ranging from the most discerning collectors to everyday art world enthusiasts, it’s clear TEFAF has something novel to suit any kind of fair goer. 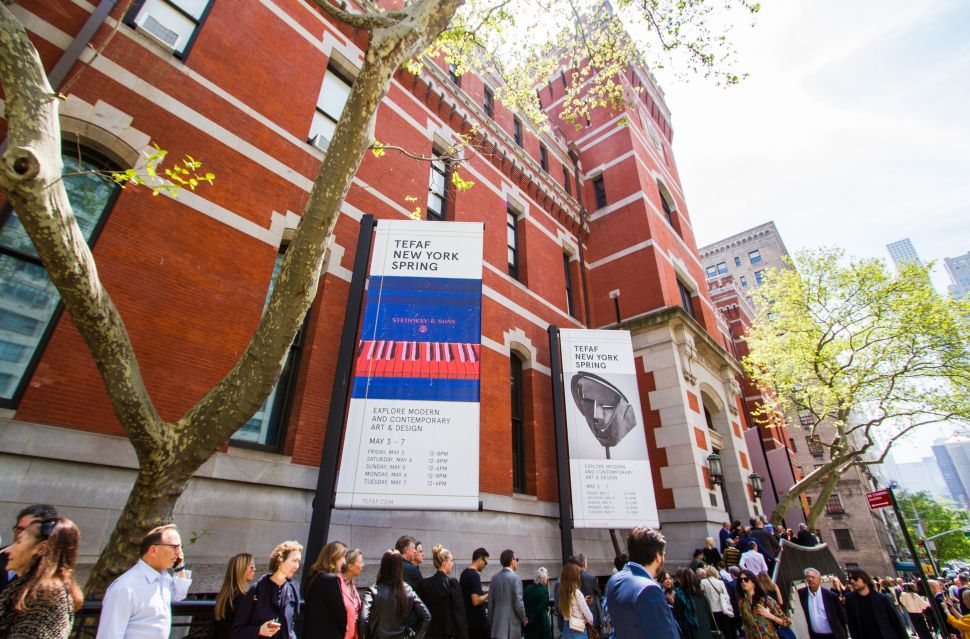