Genial, jovial, and always reassuringly natural, Dennis Quaid has range and depth and is not afraid to explore challenging roles of every description. In the wacko thriller The Intruder, he decided it’s time for a trip to the dark side. Yes, fans, this time he’s the villain. Playing against type, he’s good at that, too.

After years of care and devotion to his rustic, vine-covered dream house in Napa wine country called Foxglove, Charlie Peck is forced by business and financial woes to reluctantly sell the place to an attractive and successful couple from San Francisco. Husband Scott (Michael Ealy) is a marketing whiz and his gorgeous wife Annie (Meagan Good) is a magazine writer.

Isolated from the city and peaceful as a breath of fresh air, Foxglove is the perfect place to raise a family and begin a stress-free new life. The seller is most convivial and says all the right things, but he’s just a tad too charming. He turns over the keys, but the story does not end there. They don’t know it yet, but Charlie has no intention of leaving.

He says he’s moving to Florida to live with his daughter, but when they wake up he’s mowing the lawn and planting grass seed. By Thanksgiving, he’s still around, and when Annie invites him to share Thanksgiving dinner, he provides the pies. At Christmas, he strings the holiday lights when Scott is not home. Charlie’s a nice guy, but he shows no signs of going away. The more changes they make to the house, the more visibly nervous and disenchanted he gets.

The problem, which it takes them a bewilderingly long time to figure out, is that Charlie still firmly believes Foxglove belongs to him. Scott thinks he sees Charlie inside the house in the middle of the night. Somebody almost runs Scott down on the road and he ends up in the hospital. Their closest friend disappears.

Finally, Scott and Annie do some latent homework and discover Charlie’s daughter is so afraid of her father that she changed her name and moved to Maine, not Florida. Worst of all, Charlie might not be just a creep but a psychopathic killer as well who has been living in Scott and Annie’s cellar, without their knowledge, the whole time. Things come to a head when Charlie plots to add Annie to his possessions, and all hell breaks loose.

What took them so long to catch on? Their suspicions should have begun the day they moved in and Charlie showed them his personal armory of assault weapons. But you know thrillers. Five-minute plots have a way of dragging familiar ideas into 2-hour narratives. This one has been done to death.

Without the usual “gotcha” contrivances in movies like this, the suspense builds rationally, but when director Deon Taylor, working from a pedestrian script by David Loughery, shifts gears and the movie turns both violent and silly, The Intruder loses credibility and logic, and everyone overacts all over the place. It won’t do much for the tourist trade, but so what? The price of real estate in the Napa Valley is too high already. 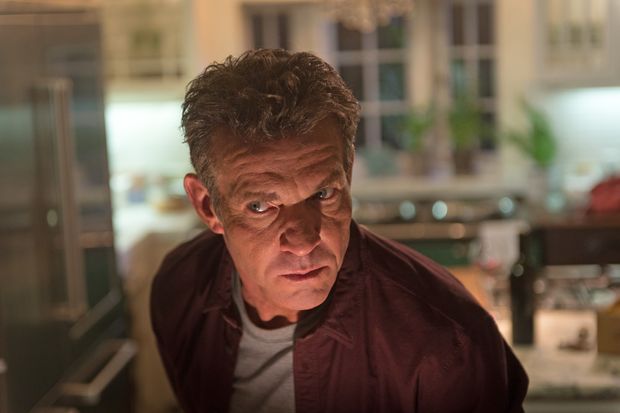